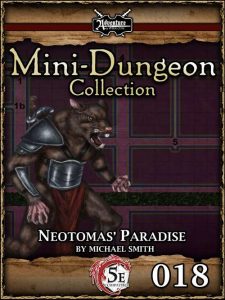 This pdf clocks in at 2 pages and is a mini-dungeon. This means we get 2 pages content, including a solid map and all item/monster-stats hyperlinked and thus, absent from the pdf, with only deviations from the statblocks being noted for the GM. Unlike most 5E Mini-Dungeons, this one does not come with VTT-maps or player-friendly iterations, which is a bit of a bummer.

So, beggars have been vanishing and thus, it falls to the PCs to venture forth into the sewers to find them – and yes, they may contract sewer plague here – which is a nice deviation from the tired. Exploring the dark tunnels, the PCs not only have to brave rat swarms, they will also encounter a ghost of a slain beggar before finding the culprit of the disappearances – a nasty wererat slaver on a recruiting spree and by now transformed were-rat beggars…oh, and yes, the PCs can walk into a gelatinous cube.

On the downside, the ghost is once again not an encounter supplemented by social skills or interaction in that way…and the wererat boss uses the same stats as the wererat beggars…which feels a bit lazy. Which not provide some statblock modification shorthands here?

Editing and formatting are very good, I noticed no significant hiccups, though there are two hyperlinks that are not functioning properly. Layout adheres to a nice 2-column full-color standard and the pdf comes sans bookmarks, but needs none at this length. Cartography is full color and surprisingly good for such an inexpensive pdf, but there is no key-less version of the map to print out and hand to your players. Stats, as mentioned above, obviously are hyperlinked to the SRD.

Michael Smith’s good sewer level in the original had it all – environmental hazards, lighting, social interaction…and apart from the lighting issue, all are lost in translation. Social interaction? Not really covered – the ghost is just window-dressing. The boss uses the same stats as his servants (which sucks) and any skill information is curiously absent as well – fallen into sewage? Well, no idea how hard it is to get out again. Not impressed. The conversion, in short, gets rid of what made this fun, at least to me. My final verdict will clock in at 2.5 stars, rounded down for the purpose of this platform.

You can get this mini-dungeon here on OBS!
Endzeitgeist out.