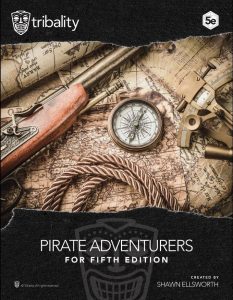 This pdf clocks in at 9 pages, 1 page front cover, 1 page editorial/ToC, 1 page SRD, leaving us with 6 pages of content, so let’s take a look!

One issue you’ll immediately bump into when playing a pirate campaign in 5e would be that the official backgrounds don’t have that much variety to offer; you basically choose sailor. Yeah, that gets a bit old pretty quick when the whole group takes it, right? Well, this little pdf actually features 4 variants of the background: Privateers retain the basic framework, but since they’re sailing for a nation, their feature provides friendly shores, where nobles and commoners alike are more likely to accommodate your requests. The ship’s surgeon background is slightly more complex, providing a variation of skill proficiencies received, gaining both Investigation and Medicine as well as tool proficiency with Herbalism kits and water vehicles. Similarly, such a kit is part of the starting equipment provided. As a feature, they may use a healer’s kit to heal creatures for 1 hit point, but only once per long-rest interval.

Navigators similarly get modified proficiencies: Skill-wise, Nature and Perception, tool-wise Cartographer’s tools, navigator’s tools and water vehicles. One of the tool kits is part of the starting equipment. As a feature, you cannot become lost while you can see either sun or moon – which is pretty cool! The final background, the explorer, has a story feature that is pretty cool: You are the only one to have returned from a far-off, mythical place – which provides all kinds of cool story-telling options.

The pdf also features 3 new feats: Deck Brawler is only available for those with the sailor background or its variants and lets you increase Str or Dex by 1, to a maximum of 20, provides +2 initiative when standing on something floating on water, climbing doesn’t halve your speed anymore and you add your proficiency bonus to any check that involves boarding another vessel. The latter is a bit ambiguous: If the respective action already receives the proficiency bonus, do you add it a second time? I guess that might be the case, but I’m not 100% sure.

The second feat would be Flintlock Expert, which nets proficiency with pistols, doesn’t impose disadvantage when using a ranged weapon within a foe that’s 5 ft. of you. Additionally, you may use a bonus action to attack with a loaded pistol after attacking with a melee attack. The third feat, Nimble, nets a Dexterity increase, up to a maximum of 20 as well as +1 AC when wearing light or no armor.

The pdf also offers a whole array of new weaponry: Bayonets and belaying pins, boarding axes, dirks, hooks, cutlasses, rapiers and scimitars can be found. The pdf also features a total of 4 martial ranged weapons: Flintlocks, Dragon Pistols, Blunderbusses and Flintlock Muskets. The pdf offers alternate damage outputs for games where guns are rare, which is a nice touch. Both blunderbusses and dragon pistols can alternatively fire cone-spread shots and e.g. attaching or taking off hooks is covered here. On a slightly nitpicky side, the pdf does not mention that the ammunition can’t be scavenged after being fired, though that should be pretty obvious. Still, RAW, it can be.

We also get an array of nice items – from astrolabe to eye patches and nautical charts, up to reed breathing tubes, the items provided are cool.

The final section of the pdf introduces a total of 6 shipboard roles: These are relevant only on board of a ship and provide additional options while engaged in naval combat. Some of them have specific prerequisites regarding background or proficiency. Captains may use their bonus action to grant an ally that can see or hear him advantage on their next attack roll, skill check or saving throw, but only once per short rest interval. Additional, via an Int-check as their action, they may find weak spots in enemy vessels, granting advantage to attacks versus the vessel until your next turn.

The quartermaster may use his action to choose a crew member within 60 feet, granting said member advantage on the next attack, skill check or saving throw – this guy does not have the captain’s 1/rest interval-limit, though. Pilots can make Dex-checks to impose disadvantage on attacks versus their vessel until their next turn, but only once per rest interval. The Boatswain may use his action to supervise ship repairs, recovering 1d4 + level hit points for the vessel. Master Gunners may use their action to fire all guns on one side of the ship at the same time, foregoing the usual turns. One attack roll is made for all cannons, with advantage. On a miss, the broadside still inflicts half damage. The Ship’s Surgeon, finally, may revive crew members via DC 10 Wisdom (Medicine) checks, with two options provided for different degrees of abstraction – nice!

Editing and formatting are very good, I noticed no significant issues in either rules-language or formal criteria. Layout adheres to Tribality Publishing’s elegant 2-column full-color standard and the pdf sports thematically fitting photography as art…which frankly works surprisingly well! The pdf has no bookmarks, but at the short length, needs none.

Shawn Ellsworth’s little toolkit is well-crafted; the options presented are a significant step up and render depicting naval combat in 5e significantly more rewarding. My complaints pertaining this pdf should thus be taken as slightly nitpicky, not true detractors: As a brief file, it doesn’t offer full background goal, personality trait, ideal, etc. options for the variant backgrounds – these may be dressing only, but I rather like them. The ammunition-scavenging component is another minor hiccup in my book. My third complaint would pertain the ship roles: I LOVE them. I really do. That being said, I think they would be even more rewarding if each featured at least two options…or options to further upgrade them via feats or the like.

That being said, all of these complaints boil ultimately down to the scope of this humble pdf: What it manages to portray in its scant few pages is impressive and deserves being acknowledged. It also was one of Tribality Publishing’s first offerings, which makes it even more remarkable and means that it gets a bit of leeway.

How to rate this, then? Well, I don’t consider this perfect, but for the very fair price-point, this is well worth getting…and I hope to see the theme expanded at some point in the future! My final verdict will clock in at 4.5 stars, rounded up to 5 for the purpose of this platform.

You can directly support Tribality Publishing here on patreon!
Endzeitgeist out.