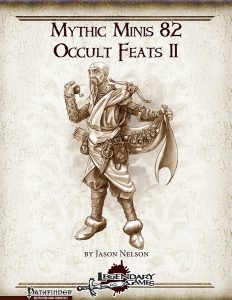 -Psychic Adept: Gain mythic tier knacks with limited uses; one, you may use at-will; this mastered knack can be upgraded to its mythic iteration. Solid.

-Psychic Disciple: Gain a single chosen psychic discipline’s 1st level discipline spell as a 2/day SP in addition to the one gained from the base feat. Via mythic power, the chosen spells can be upgraded to their mythic versions and the discipline’s spells are considered to e on your spell-list for spell-trigger and spell-completion item purposes.

-Psychic Maestro: +1 occult skill unlock per 2 mythic tiers gain the benefits of the base feat. You may also take 10 and 20 when performing an occult skill unlock learned with this feat. Additionally, 1/day you may expend mythic power to reroll a check made as part of the unlock.

-Psychic Sensitivity: Use occult skill unlocks, regardless of being trained in the skills. Also, roll surge die twice when used in conjunction with one and take the better result. Very cool!

-Psychic Virtuoso: Bonus to skill checks for occult skill unlocks increases by 2. Also allows you to expend mythic power to treat a roll made in conjunction with an occult skill unlock as a natural 20…but you have to decide beforehand. Not the biggest fan here, but the beforehand caveat keeps it in line.

-Shatter Mental Mask: When shattering a foe’s mental mask, you receive additional information and may even attempt dispel defenses; if mythic, dispelling requires mythic power expenditure. Additionally, you may even suppress extraordinary or supernatural abilities granting resistance or immunity. Nice one.

-Spirit Sense: + mythic tier to notice haunts and incorporeal creatures as well as to checks made to identify them. Non-damaging corporeal spells also have an increased chance affecting them, based on tier. Neat!

-Spiritual Balance: Increases bonus granted by still mind and adds a tactical dimension by allowing for ki expenditure to either double the bonus granted or extend it to adjacent allies…which actually can be pretty evocative! (Don’t let go off my hand! Don’t venture off!)

-Third Eye: + mythic tier minutes of daily use; also roll twice, take the better result when the third eye’s open. Also use mythic power to negate the fatigue incurred upon closing it.

-Xenoglossy: Communicate with mythic tier creatures at the same time, regardless of shared common language. If used with a single critter, instead increase the duration as well as the bonus to Linguistics by mythic tier.

Jason Nelson’s second serving of occult feats, due to the nature of the base feats, had a bit less room to grow; that being said, you won’t find bland numerical escalations herein; even in cases where the design goes the route of depth, it does so with the intention of adding options rather than just escalating the math. Craftsmanship-wise, there is nothing to complain about, which is why I will settle on a well-earned 5 star-rating.