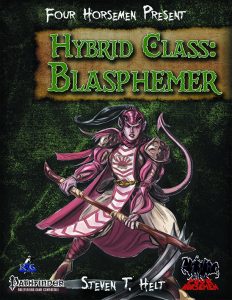 This hybrid class clocks in at 13 pages, 1 page front cover, 1 page editorial, 1 page SRD, leaving us with 10 pages of content, so let’s take a look!

The blasphemer, as a chassis, is a blending of antipaladin and bard and as such, must be evil. The class gets d8 HD, 3/4 BAB-progression, good Fort- and Will-saves, 6+Int skills per level and proficiency with simple and martial weapons as well as all types of armor and shields, excluding tower shields. The class begins play with an aura of evil and gets access to cantrips. The class draws its spells from the antipaladin and bard spell lists (with certain spells added and summons only being able to call forth evil creatures) and gains up to 6th level spontaneous spellcasting governed by Charisma.

They get at-will detect good and the Charisma-based pernicious performance, which can be likened to bardic performance in a way. 4 + Cha-mod rounds, +2 per level of this performance are available, with action economy to activate it decreasing from standard action to move action at 7th level and 13th level unlocking the option to start the performance as a swift action – though it should be noted that the other action types still remain feasible, should you find yourself in need of e.g. a swift action. Interaction with deafness of both blasphemer and audience are covered. Here’s the catch, though: While the basics of the ability are set in stone, at 2nd level and every 3 levels thereafter, the class chooses from an array of wicked words – which double as basically a set of talents that unlocks new performances for the blasphemer with every-increasing potency and, obviously, different minimum levels required. So yeah, the class has more player-agenda – that’s a good thing.

Lowering the attitudes of all hearing them towards every other creature in hearing range by one step via Diplomacy is pretty cool – but tying the Will-save DC to resist it to the skill-check…is not. I can make this an unwinnable save pretty easily and RAW, this means that blasphemers could basically make a group of even high-level holy, pious men slaughter each other, provided they have a sufficiently powerful array of items/buffs. Sure, a good GM can handle this…but still…why not tie it simple to the usual class formula that isn’t this easily cheesed? It is also here I feel obliged to mention that formatting in this pdf isn’t as clear as in most Rogue Genius Games-books – the class table sports some lines where everything is italicized and the talent-section has a part, where a lot of hyperlink-underlined blue is in the book…sans the hyperlinks. Interesting, just fyi – instead of providing simply an array of diverse performances, the class gets options to add spells with certain themes to their roster and may even learn hexes etc. – which then are powered by rounds of the song expended. Similarly, passive abilities can be found here as well…alongside a bunch of unique ones – like uttering words in the vile language to make objects rot.

Wait, I have heard that one before, right? Well, yeah – thematically, the blasphemer takes a cue from 3.X’s book of vile darkness, with references to this primal tongue – which makes me happy from a continuity point of view. 3rd level provides unholy resilience, 4th smite (with an upgrade available as a wicked word – and thus only while performing). Fiendish boon is gained at 5th level..or was that 7th? Hey wait – yup. The table contradicts the text. Great. I love it when that happens. Seriously, though – since the text is consistent in referring to 5th level, I assume that’s the right one…but I’m honestly not sure, since this means 7th level is dead apart from the spellcasting and action increase of the performance. Vile resistance is gained at 15th level, providing better saves and half damage versus evil effects (none at 19th level) and 15th level allows the class to use 2 uses of its limited contingency of smites to grant smite to non-good allies within 10 feet. Capstones are handled via e.g. save or suck wicked words.

The Flame-Tongue is a hellfire-themed archetype with a modified spell-list, Fire Music as a bonus feat at, at 11th level, 1/2 fire damage// 1/2 divine damage for fire spells cast – which is powerful, yes, but up till then, your fire specialist has no means of bypassing even a bit of fire resistance…which is kind of annoying. Some minor scaling would have been nice to see here. The second archetype would be the Scale-Tongue, who gets a modified spell-list as well and unlocks Pathfinder Unchained’s skill unlocks for social skills (Bluff, Diplomacy and Intimidate) at 5th level. Okay, I get that…but which ones? The 5-rank unlocks? The 10 rank-unlocks? ALL of them? I have no idea and the pdf fails to specify anything in that manner. At 11th level, these guys may spit a flexible variant of poison…which is rather cool!

It should also be noted that the pdf provides 3 of the “Plus-X”-type of feats for class abilities and 4 new spells that also take the occult classes into account…and while the formatting of this page is also a bit wonky regarding bolded text, the spells themselves, which make good creatures hearing your uttering nauseated, undo targets by vile language, hamper concentration or incite murderous rages, can be considered pretty cool.

Editing and formatting aren’t bad, but not as tight as we’ve come to expect from Rogue Genius Games – as mentioned, there are a couple pretty glaring, but mostly aesthetic hiccups that even a cursory last glance could have caught. Layout adheres to RGG’s two-column full-color standard for the series and the pdf comes fully bookmarked for your convenience.

I really want to like the blasphemer more than I actually do, and I was not the only one – my players reported a similar experience. We thoroughly enjoyed the idea of the evil instigator; we loved, from a flavor-point of view, the nod towards the BoVD, And we generally enjoyed the framework of the class. The blasphemer isn’t bad by any means…but it also feels…less like a unique class. I like the hex-resource-management; like quite a few things…but ultimately, the class feels a bit frankensteinish to me. Let me elaborate: The better hybrid classes in the ACG, the more popular ones, sport something rather unique.

In 3pp-publishing, I can actually name several that do a better job than the ACG at that, including classes crafted by the four horsemen…but oh well. The blasphemer, while not bad by any means, can be considered an evil-coated bard with a bit of smiting (max 3/day at 16th level sans feats) and antipaladin spells and a few unique options thrown in. If that’s what you’re looking for, this class may just be what you needed. If you’re like me and wished it had more of its unique focus…well, then you may end up disappointed on a high level.

Steven T. Helt’s rules usually are characterized by a pronounced quality, a tightness, a very smooth elegance that doesn’t need complexity to be complex or new for novelty’s sake. Here, though, from formatting to some design decisions, I couldn’t help but feel that this pdf was a bit rushed. The high level ability that suddenly lets you use smite as a resource to power an aura? Cool! But it feels tacked on and like a foreign body in the total concept of the class since otherwise, smite and auras remain an afterthought.

Similarly, the archetypes aren’t too impressive in my book and some uncharacteristic blunders have crawled into this book beyond the formatting hiccups, rendering it less refined than usual for the Four Horsemen, who usually absolutely excel at these components. Similarly, from a balance standpoint, I think the more powerful antipaladin spell-list should have been weighed as higher level spells as opposed to the bard spells.

The Blasphemer, ultimately, may not be a bad class – but it also falls short of being truly great. My final verdict hence will clock in at 3.5 stars, but I have to round down here due to the blend of hiccups and aforementioned considerations.

You can get this hybrid class here on OBS and here on d20pfsrd.com’s shop!
Endzeitgeist out.