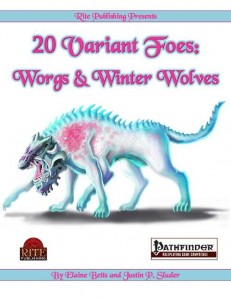 This pdf clocks in at a massive 64 pages, 1 page front cover, 1 page editorial, 1 page SRD, leaving us with a massive 61 pages of content, so let’s take a look!

All right, before I get into the creatures herein, there is something I need to address: Know how so many monster books provide statblocks where you just think “Yawn, could have done that myself.”? Well, this is NOT one of those. Over 15 (!!!) templates have been used in the creation of those creatures, drawing from the ample fund of awesome templates pioneered in Rite Publishing’s legendary “Book of Monster Templates” and similar sources, with all the necessary crunch provided – and yes, while some of the templates are simple, others consist of rather complex brutes that are quite some work to properly apply. Beyond these 9 items, two of which have artifact status, a spell and 13 feats have been used here as well. Statblock wizard Justin Sluder uses some of Rogue Genius Games “Horrifically Overpowered” feats here as well, making for what boils down to mini templates for the most powerful of adversaries herein. Beyond that, no less than 8 archetypes, including the aberrant aegis archetype for Dreamscarred Press’ cool psionic class are provided and in case that’s not enough for you, what about a RP-breakdown of worgs and winterwolves as 15 and 40 RP-races to be potentially played via the ARG rules to round this one off? Even for Rite Publishing’s excessive, very high standard of NPC-supplemental crunch, this is very close to the absolute apex of what one could ask for.

Now another thing that makes this book a joy to read would be the fact that all creatures herein get their own chance to comment and talk – in Rite Publishing’s time-honored tradition, the crunch is supplemented by great in character prose that makes reading what otherwise would be a dry collection of cool statblocks actually compelling. Furthermore, the respective fluff further supplements the crunch – take the lowest CR creatures herein, Erox, Onyx and Grux – phalanx terror worgs linked by a kind of hivemind that don’t always see eye to eye – ranging from CR 3 to 5, the most simple of them also has the young template and expert levels applied, while the threatening Erox instead comes with maneuver master levels – yes, not even standard class levels, but properly archetype’d ones. And seriously, the build is nasty for CR 5…in a good way.

On the weird side of the spectrum, an arctic druid pygmy winter wolf that considers himself the incarnation of winter and on the more disturbing, what about a spell-less ranger worg that makes for a superb pack commander and has a deal most disturbing with a community he protects…in exchange for the sick and old…

If you’re looking for something less identifiable as the original, take a look at Qixa, an entropic worg oracle of fire and flames, feared as a spirit of vengeance and death. On the other hand, do not think that every creature herein was necessary an antagonist – Judge Kerist is actually a sacred, celestial worg inquisitor, a true hunter of the wicked, on the hunt to punish those who slew his adopted parents and stamp out evil, and ingrained within the character, the old argument of nurture vs. nature still looms, making for roleplaying potential galore… Speaking of which – if you’re looking for a celestial force of good, the Half-Solar worg bestial oathbound paladin Lady Ferra, clocking in at an impressive CR 19, might just suit your needs

Now for truly diverse and agile worgs, what about one who actually uses Rite Publishing’s superb shapeshifter-class, the Taskshaper? On the build-side very interesting would be Tirusta, the Hag Wolf, who had the winter wolf racial HD reverse-engineered away in favor of great hero/hexen cavalier levels. Especially suited for eastern/WuXia-style settings would be the mithral-clad Silver Wolf that utilizes Zombie Sky Press’ Yamabushi class – here let me insert something: You may have noticed that these builds use A LOT of cool 3pp material – essentially mostly a best-of. The epic thing here would be that you do not require these pdfs to run these creatures. The spirit of 3pp-camaradrie breathing from these pages, sources are directly cited and if I had none of the respective sources , I’d go for more than one of them after reading this pdf.

Now if you’re looking for a lesser of two evils type of scenario or want to get rid of a certain magical beast companion, look no further than the vile kinslayer – specialized in slaying pups and magical beasts, this apex predator ravenous martial artist 10 worg is a terror to behold and comes with a single-minded, sadistic intellect to supplement this brawn.

On my “Almost too awesome to not squee at” list would be the dread “W” – a bipedal dread vampire worg pistolero – at once potential savior and dread wolf-in-sheep’s clothing… Now if your PCs start yawning at werewolves and the like – know a surefire way to make them stop? Have them run like crazy from the CR 20 gargantuan bipedal Gr’Zelha and grin at their surprised gasps when the huge beast starts further fortifying herself with deadly psionic powers.

Or do you require a truly nasty, yet in a strange way, honorable taskmaster? What about a schizoid, two-headed worg mystic theurge that desperately want to be turned “back” into two sisters – if, indeed the creature ever was anything but what it seems to be today and this belief is not the result of some strange delusion. Iythous the trickster is a winter wolf clever godling with ample templates applied that takes the fluff of the winter wolf on its head, giving it a distinctly Caribbean/Polynesian flair and adding essentially a hook on imminent divine ascension to the fey creature for a fickle and fearsome foe that should challenge even the most powerful of PCs. For a more straightforward, yet nonetheless terribly impressive adversary, the CR 25 Degrith the Defiler worg champion build that provides a quasi-deity, perhaps of cthulhoid origins, threat.

Want to know something funny? This guy isn’t the hardest foe herein. Not by a lot. The Legendary Baywulf of the Nightvale, a lupine wight of the color of blood may sound like a nightmareish legend and have the stats to supplement this claim, but he’s not the toughest brute in here either. This honor has to be split among two creatures whose statblocks are so beautiful, one’s eyes might glaze over – on the one hand, there would be Lord Shong Vutok, the Boeal Inferno, an accelerated, bipedal, half-balor winterwolf primagus/champion (via talented rogue-gestalting) CR 30/MR 7, on the other hand no other than the friggin’ CR 29/MR 10 coolest incarnation of the world-ending Fenris Wolf I’ve seen in quite a while: While Shong Vutok is awash in options, the Fenris Wolf’s raw death-dealing potential and brute power more than make up for this and fit thematically with the concept.

Have I mentioned the bonus creatures at the end of the pdf, an advanced shadow and two highly complex NPC builds? Well, now I have.

Editing and formatting are very good, I didn’t notice significant glitches. Layout adheres to Rite Publishing’s two-column full-color standard and the pdf deserves special mentioning for its interior art – the cover is by far not the best or most iconic piece herein and while I’ve seen the rendition of one wolf before, the vast majority are original, glorious, beautiful pieces indeed that help the critters come alive. The pdf comes excessively bookmarked for your convenience.

The team of Justin Sluder and Elaine Betts have delivered one of the finest NPC-books currently available for Pathfinder here. Yes, NPCs. For while the creatures herein are monstrous, they all come with compelling stories and should be considered full-blown characters of their own right, running the gamut from friendly to nightmareish, from cool to legendary lethality levels that could even challenge a capstone mythic party. The fact that this makes use of all those cool 3pp-supplements without requiring you to own them is just another piece of awesomeness to add to this beast of a book. And then there’s Rite’s signature complexity regarding statblocks. Don’t get me wrong, I enjoy standard builds as much as the next dude, but at best for mooks. My NPCs, my villains, they better be special.

This book delivers just that, builds that would otherwise take ages to get right, to apply the templates etc. for the distinct connoisseur of brutal beasts. This is the haute cuisine of NPC-builds. This is a book of excellent instant NPCs of the lupine variety, both friends and foes, that will be remembered by your players for a long time. Combined with the superb bang-for-buck-ratio and the cool artworks, this is a clear 5 star + seal of approval book and a candidate for my Top Ten of 2014.

Hunt down these awesome NPCs and their cool storylines and builds here on OBS and here on d20pfsrd.com’s shop!