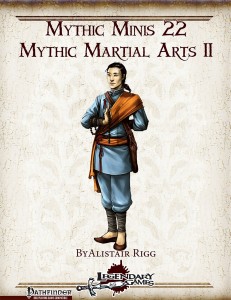 This Mythic Mini about martial arts provides 6 new mythic martial arts, so what do we get?

-Boar Ferocity: Add 1/2 tier to Boar ferocity’s demoralize duration. Additionally, if the target would be shaken for 4 rounds or more, you may exchange 4 of these for 1 round of the nauseated condition. Use mythic power to make the target frightened instead. AWESOME! That’s what I’m talking about!

-Crane Style: Better defense, enter crane style as if fighting defensively as an immediate action. Keep threatening AoOs, but at -2 to atk. Neat.

-Crane Riposte: +1/2 mythic tier on AoOs with Crane Riposte. Additionally, when hit while fighting defensively in crane wing, make a retaliation attack either via AoO or as an immediate action. This is very iconic.

-Crane Wing: Expend mythic power to extend Crane Wing to more attacks on a 1 for 1 basis. Also potentially force attacks directed on you on other creatures. Cool!

Alistair Rigg, after the first pdf on martial arts, may deliver slightly less content here, but each and every mythic feat of these styles ROCKS. They take the base concept of the styles and make them work in much more awesome ways for a glorious pdf for martial artists – well worth a full-blown recommendation of 5 stars + seal of approval!

You can get these awesome styles here on OBS and here on d20pfsrd.com’s shop!