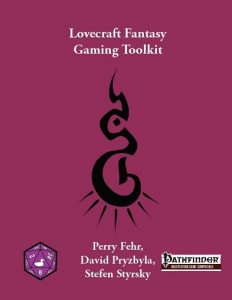 This pdf clocks in at 70 pages, 1 page front cover, 1 page editorial/ToC,2 pages of SRD, 1 page blank, leaving us with a massive 65 pages of content, so let’s take a look!

Okay, so lovecraftian horror =/= lovecraftian fantasy. We need to get that out of the way right from the bat. When I’m playing CoC and ToC, I lean towards a more purist bent and tend to prefer investigation-heavy, deadly scenarios, where, more often than not, everyone dies or becomes insane, even if they win. This is not for everyone, though; most of my players prefer a less bleak perspective.

The pulpy side of those aforementioned systems never was really something I fancied. At the same time, I do enjoy a hefty dose of weird fantasy and lovecraftian themes in my fantasy, which is a completely different beast – ultimately, the constant presence of magic and increased PC-capabilities result in you telling different stories that blend the tropes of Lovecratiana with heroic fantasy for a dark edge.

The problem is that fantasy roleplaying games like PFRPG, as a default, aren’t really intended and geared up to represent the aforementioned tropes in a concise and consistent manner, an issue this pdf seeks to remedy. Hence, to cut a long ramble short, this book covers basically a campaign template that allows you to play lovecraftian fantasy while still sticking to PFRPG’s design-paradigms. As such, this book covers A LOT of ground and in the interest of readability, I will not go into the nitty and gritty details of all the components herein, instead trying to highlight what this book, as a whole, has to offer.

We begin with a smattering of lovecraftian-lore inspired settlements, which, while originally taken from Porphyra’s Dunmark-region, pretty much can be inserted into any game – from Frog’s Crossing to Eelsmarch and Port Akham, the themes are here, resound and the solid settlement statblocks, supported by a smattering of settlement rules, make for a nice introduction to the subject matter.

Now the next course would pertain the core races and their respective roles within the panorama of races in a lovecraftian fantasy setting. Each of the races sports default niches (read: ethnicities and roles) for races to fill, with e.g. being Asian conferring a +1 bonus to Spellcraft. Slightly annoying – the bonuses granted are not properly codified by type – I assume them to be racial bonuses, but ultimately remain unsure. Due to the relatively small nature of them, though, it is hard to construct a scenario in which this would lead to any significant issues. Beyond some adventure hooks, the pdf also provides a concise list of themes to remember – and this includes the relative rarity of class’d characters. Also important: Maintaining a sense of normalcy. Most of the pitfalls of the genre stem from people becoming blasé about threats – without establishing a sense of normalcy, all threats lose and impact. These considerations, mind you, should not only be remembered by GMs using this book – they also can prove to be quite helpful in dark fantasy, weird fantasy and similar genres.

Okay, this section out of the way, we begin to dive into class options – and there is a metric ton of those inside this book. The chapter on archetypes is vast and over 20 pages long! The archetypes themselves are thematically fitting, if a bit conservative – but they do one interesting thing: You see, there is a lovecraftian spell-list which is assumed to be the default for all classes unless otherwise noted, putting a severe complexity (and power) nerf on spellcasting that fits the genre well – though e.g. the surgeon alchemist retains the default formulae-list. Antipaladins sworn to Dagon (with amphibian apotheosis), mental patient barbarians, journalist bards, clergymen clerics, hermit druids, investigator inquisitors that can draw the elder sign, soldiers and lawmen, cultists of Leng monks (think qinggong variant), oracles with the apocalypse mystery (still as problematic and OP as when I first encountered it…but also still as cool), sorcerors with bloodlines from the old ones or elder gods, cryptozoologist summoners, cultist witches and antiquarian wizards – there are even more than I mentioned in this chapter and each character type receives a sample NPC, adding to the usefulness of this chapter. While overall, I wasn’t too blown away by it, the majority of the content herein remains valid, though some minor balance hiccups do exist.

Beyond this significant array of archetypes, the pdf also sports a few bardic masterpieces, including, how could it be any other way, the famous King in Yellow and the Music of Erich Zann (not Eric, as this book calls it, at least according to my collected works). Similarly, there are a couple or arcane discoveries (available in lieu of bonus feats) for casters. The new feats generally are pretty cool – and may save your life in a game based on Lovecraftiana – 1/day running from a foe sans incurring ANY AoOs (neither from the target, nor from others) while you run is very useful and increases your survival-rate significantly. Gaining the Innsmouth Look is also an option and indeed, several cool traits can be found here – including heirloom documents.

Speaking of documents: The maleficent tomes of the Lovecraftian mythos are an integral component of the tropes of this genre – but apart from Legendary Games’ Gothic Grimoires, there simply aren’t that many of them out there. Enter this one. Each book herein has an EDF – an Eldritch Document Factor and a somewhat clumsily named Power Call (abbreviated PC – because that will not get confusing at all…). Level-related powers are cast at a level equal to the EDF. For each month of possession of such a document, you have to roll on the CA-table, with CA standing for cosmic attention. Yes, this is usually bad news. Similarly PC of 5 and above equals a CA-check. To check for CA, one adds EDF, character level of owner and the accumulated Power Call Factor and roll a d% – here, the pdf fails to specify that the above is added to the d%, but the intention is at least relatively clear from the context. Oh, and destroying or selling such a book? BAD idea. Von Unaussprechlichen Kulten (correctly written for once 75% of publications get this one wrong!!) to Zanthu Tablets – quite an array.

Beyond these vile tomes, reskins of some classic magic items as well as new ones can be found herein: Mnar Stones, Alhazred’s Lamp, Voorish Talismans – nice. Oh, and yeah – apart from the weaker ones, these have no construction-notes…thankfully. Nothing ruins horror more than being able to assembly-line-craft anti-horror items.

Now I already mentioned the lovecraftian spell-list before – but I did not note that spells cast require a Will-save – on a failure, the caster loses 1 point of Wisdom. No damage. No drain. LOSS. You better not throw magic around all the time – there is always a 5%-chance of failing this throw of the bones, no matter how much you power-game. While I use a more complex system in my horror-games, this is still a pretty easy and elegant representation of the trope. Some sample “forbidden” magics are also provided.

Beyond all those PC-centric options, monstrous adversaries obviously also need their due – with a simple fear/pseudo-SAN/panic-mechanic (fear effects dealing Wis-damage equal to creature CR) and considerations by creature type – e.g. did you know that 10% of cats have human-like Intelligence? Or that whippoorwills can touch ghosts and spirits? Similarly, a lot of the outsiders and creatures are analyzed in details for their respective usefulness in lovecraftian fantasy. The pdf also provides templates – the Batrachian template, one for making cephalopoids or pallid creatures as well as stats for Tcho-Tcho (CR 3), Teuthonians (CR 12) and general basic statblocks for mythos avatars or great old ones, to which micro-templates can be applied on the fly to represent a variety of different creatures.

The pdf also features a nice sample mini-adventure that takes place in a twisted circus, which comes with a nice, fully-depicted map in b/w. The adventure as such it pretty sketchy and I think a GM is better off considering this a sample environment/location-sketch. While there is quite a bit going on and there are tables for rumors and crowd reactions, as a module, this one does fall a bit short in that it does not really present a concise structure of events due to the space constraints – it’s basically a nice, detailed environment…but not an adventure. Why it’s billed as an adventure in the first place, I don’t know.

The pdf closes with a nice list of recommended reading.

Editing and formatting are good, though not perfect – I noticed some minor hiccups and minor issues with rules-language here and there, though, overall, this book is pretty solid in that regard and the issues generally do not break the content per se. Layout adheres to Purple Duck Games’ two-column standard, is pretty printer-friendly and sports several gorgeous pieces of full-color artwork. The pdf, bafflingly, is not bookmarked, which means that you should probably get the print-version. For a toolkit of this size, the lack of bookmarks is a comfort detriment. EDIT: I have been notified by the master of the Purple Duck that bookmarks will be added to this pdf, which nets it +0.5 stars.

Perry Fehr, David Pryzbyla and Stefen Styrsky have crafted a book I ended up enjoying more than I expected. You see, I already have several rock-solid sanity-systems, horror-systems and the like. This book’s take on those concepts is minimalistic, generally pretty elegant and functional, and while I prefer more complexity, there is beauty in the simplicity here. The important observations regarding themes, conversion, etc. are more than useful and, as a grab-bag of ideas and considerations, this does make for an interesting addition to a GM’s arsenal – even if you ignore the subsystems, there is quite a bit of rules-scavenging material in this book. While there are some hiccups and the rather glaring lack of bookmarks for the electronic version (probably rectified by the time you read this review), I still consider this a good, if not perfect addition to one’s GM-arsenal. Hence, my final verdict will clock in at 4 stars, +0.5 stars for the added bookmarks…but I still feel I have to round down.

You can get this neat toolkit here on OBS and here on d20pfsrd.com’s shop!