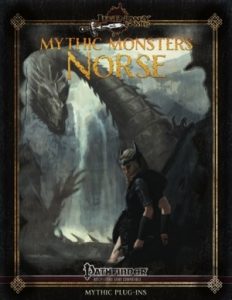 Okay, we begin this installment of mythic monsters not with feats or the like – no, we begin this with a pretty glorious array of monster options – namely 3 templates. It should be noted that both this series’ installment on giants and colossal threats work exceedingly well with these: Two are relatively simple: The MR 1 CR +1 Runecaster and Tricksome Traveler templates are neat – beyond codifying teh tropes of the runecaster like absorbing magic and that of the trickster traveler with many faces that can’t be tied down, they are cool. More interesting than those two (which are already pretty damn cool), at least to me, would be the MR 3 CR +3 Jotun Thane template, which requires the base creature already have the giant and jotunblood giant templates – generating a mass of difficult terrain, unshakeable and suffused with mythic might conspire to make this template one of my go-to-upgrades for the often rather weak builds of giants in published modules. The pdf also sports some advice for building not yet fully grown linnorms, including an array of abilities associated with them -once again providing a helpful, cool selection of options for the GM.

But we’re all here for the monsters, right? So let’s see what this has to offer: We begin with the Cr 12/MR 5 Einherji: Beyond making the Challenge of Single Combat, the base creature’s signature ability more potent, these beings gain a complex, evocative form of ecstatic rage – including mythic power-based option to insert intervals of calm. Oh, and they are potent versus giants and emit an appropriately unearthly golden aura. All in all, a thoroughly well-crafted upgrade for a cool base creature. One of the most popular and well-known legends in the North pertains to the waterfall-inhabiting Fossegrim, which is represented here in a CR 5/MR 2-iteration that features a powerful means of inciting unnatural lust as well as powerful, water-based abilities, the option to assume treasure forms and gain strange gifts from these watery tempters. The additional abilities here deserve special mention, for they allow the crature to function as our own mythology dictates instead of as a slimmed down version. The creature also comes with a neat full-color artwork, just fyi.

At the same CR and MR, the mythic Huldra is upgraded by getting increases of the base creature’s abilities as well as access to a captivating song ability, once again coming closer to the real world mythological approximations. And then, there are the linnorms – and boyo, are they impressive: The cairn linnorm clocks in at CR 22/MR 9 and wrecks terrain as easily as the walking dead – it can even consume ghosts and become incorporeal! And you thought corporeal dragons were bad news… The CR 17/MR 7 crag linnorm may ignite creatures with his breath or poison and turn even exceedingly potent metal items into useless slag. This would btw. as good a place as any to comment on the options to enhance linnorm death curses with mythic power to *really* make the slayers rue the day they buried their weapons in the body of these fearsome predators.

The fjord linnorm clocks in at CR 20/MR 8 may forego tail attacks in favor of lethal blasts of water and devastate whole coastlines with their mythic power-enhanced tidal waves. They btw. also get a 1-page artwork. The ice linnorm at CR 21/ MR 8 can encapsulate itself in a powerful ice shell, greatly increasing the staying power of these adversaries…oh, and said shell can be detonated in an eruption of devastating shards. The CR 23/MR 9 Taiga linnorm can extend its spikes and awaken the forests to annihilate the foolish mortals that dared to intrude upon their territory. The CR 25/MR 10 tarn linnorm can not only use multiple breath weapon forms, it can modify the cooldown of them via the surge die – which is an awesome idea!. Oh, and assuming a fluid form makes them more durable and dangerous…not that their lethal build would have required that, mind you!

The legendary norns, at CR 22/MR 9, lavishly depicted with a great piece of full color artwork, receives all the powerful abilities associated with the threads of fate – these can be manipulated to exert control over mortals…and manipulated to destroy them. Their shears are brutal and…snipping the threads is actually represented via a powerful save-or-die ability with a cooldown…nasty! At CR 10/MR 4 the svartalfar all get death attacks and may deliver a select array of SPs via a quickened variant of spellstrike…and their shadow dodge can be used more often via mythic power. The absolutely lavishly-rendered CR 15/MR 6 mythic valkyrie can negate death effects, fight on when mortals would have been eviscerated and they have a cool blessing that renders them nigh-unstoppable through metal…oh, and they can properly evoke the memories of battles once fought, both with magic and their powerful skald abilities…and constitute the very best take on the concept I have ever seen for any d20-iteration. Pure awesomeness that is only enhanced by the glorious artwork. While no Sleipnir is in here, an artwork of the creature can btw. be found.

And then there would be a single creature, which, on its own, is already more than ample reason to get this pdf – the most majestic build for the Fenris Wolf I have ever seen -at CR 30/MR 10, this beast can bite of hands (Hej Baldr!), emit a dread howl, grow to Huge size, create friggin’ rivers with his saliva, burst forth with ridiculous speed, control all kinds of wolves – glorious. The one-page artwork of the chained wolf, standing in a sea of blood and armors of the slain is probably one of the coolest renditions of the creature I have ever seen. On a minor nitpick – two paragraphs of its fluff are bolded when they shouldn’t be – but that’s cosmetic.

Editing and formatting are top-notch, I noticed no grievous glitches. Layout adheres to Legendary Games two-column full color standard. The original pieces of full color art provided are high-quality and awesome – particularly the one-page full-color picture of the Fenris Wolf is simply awesome -if I had the financial means, I’d hang that as an original in print in my home…yeah, that awesome. The pdf comes fully bookmarked for your convenience.

Mike Welham, Jason Nelson, Alistair Rigg – gentlemen, you did it. Whenever I think I have seen the best this series has to offer, you one-up yourselves. The linnorms herein are consistent and sport similar abilities, but also feature very distinct and unique modifications. The supplemental templates are great. The artworks are simply superb (Kudos to Michael Jaecks, Matt Lewis, Chris McFann, Andrea Saavedra and Tanyaporn Sangsnit!) and the builds are as brutal as northern mythology. When I return to the savage north with my campaigns, be it via the Northlands Saga or AAW games’ frontier-modules in Rybalka, I’ll take this book and cackle with glee – what is in here simply makes you gush, grin and dream about the evocative, legendary confrontations awaiting -a true beauty, well worth a final verdict of 5 stars + seal of approval.

You can get these glorious creatures here on OBS and here on d20pfsrd.com’s shop!