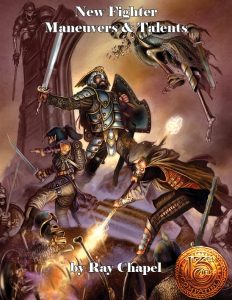 This expansion for the fighter-class clocks in at 31 pages, 1 page front cover, 1 page editorial, 1 page ToC, 1 page artist contacts, 2 pages of SRD, leaving us with 25 pages of content, so let’s take a look!

The 13th Age fighter, as this pdf aptly observes, is a significant step up in usefulness and player enjoyment over most iterations in any d20-based gaming system, but there are some holes in the fighter’s arsenal: In the introduction, the author aptly observes the odd lack of flexible attack triggers on odd results (haha…sorry, I’ll punch myself later for that one) and the relative dearth of ranged attack compatible maneuvers. This pdf, thus, introduces the concept of martial schools that can be pictured as a fluffy umbrella for new feats and maneuvers, with the core book’s array being treated as unaligned or basic tricks – this fluffy diversification tactic is not necessarily a bad idea, since it allows a GM to create local differences in martial traditions and control access to certain combinations of tricks.

The first of the martial traditions herein would be the Glimmering Cloak, which sports 3 talents and 10 maneuvers, many of which can be upgraded via feats. A thing you’ll notice if you are a purist for formatting is that the presentation of the feat-component of the respective pieces of crunch, while formally in line with 13th Age, does not sport the respective “boxes” – while this will not influence the final verdict, I felt obliged to mention it nonetheless. So, what can we do? Well, via En Guarde!, we can declare duels that penalize first nearby enemy, with feat-support also targets that are further away. The targeted creature suffers penalties while trying to attack creatures that are not you, with higher tier feats allowing crit-range increases and increased penalties – and no, you can’t abuse this since it only works once per battle – still, nice way of drawing aggro from foes.

Panache is somewhat of a pet-peeve of mine, particularly when using 13th Age’s multiclassing rules – it lets you use Cha instead of Str (and instead of Dex for ranged attacks via the Adventurer-feat)…but is balanced by only allowing that for basic melee attacks. A bit odd: “Additionally, once per battle, you may add your Charisma modifier to the die roll of a save ends the effect.”[sic!] – I’m pretty sure, a part of the sentence is missing. Pretty cool – the higher tier feats allow you to temporarily add 1/2 escalation die to MD and later PD as well for a limited amount of time. Via the parkour talent, you gain 5 free background points to assign to appropriate backgrounds like acrobat, cat burglar, etc., while also unlocking an escalation die-tied Flowing Movement. This tie can be eliminated via the champion feat, but at epic tier, you can use haste as a wizard of equivalent level…which feels odd to me, since haste targets yourself or an ally – and I can’t really see this technique grant it to an ally. That may just be me, though.

Distracting Swish is intriguing in that it allows, on odd hits, to have allies disengage – pretty cool. Now Impressive Flourish lets you add Dex or Cha, whichever is higher, to damage, with higher levels providing 2x/3x that amount. The feats decrease the triggering roll required and ties it to the escalation die. MD-enhancing Buffs, penalizing foes you miss, switching places with engaged allies (limited to 1/round), allowing allies to spend a recovery – all in all, an interesting array of maneuvers, some of which allow you to turn really sucky luck into wins – natural 1-reroll, plus, potentially rendering the foe vulnerable. The editing, however, is a bit flawed in some of these – enemy instead of enemies for the 9th level maneuver, for example. That being said, while glitches like this are jarring, they generally do not negatively influence the respective functionality of the crunch in this pdf.

The second martial arts-school in this pdf would be Heaven’s Eye, with 2 talents and 9 maneuvers, which provides solid options for ranged fighters – which include extended aiming capacity and acid arrow as well as the option to call forth supernatural storms that can deal different types of damage to foes moving closer towards you- some more guidance would have been nice here, since the pdf does mention different types of damage available, but not any suggestions for when to choose which. This still is, obviously, mostly a cosmetic complaint, though. Ricochet Shots, hails of arrows, sniping and allowing allies to disengage – all in all, a great selection of tricks for ranged fighters, with particularly the option to perform regular attacks as interrupt actions being pretty intriguing.

The Iron Hand tradition would be an unarmed – and focused on Wisdom. Now, as you probably know, unarmed strikes, RAW, are pretty subpar…which is why this pdf has a bit of an oddly phrased suggestion: “While one could reflavor unarmed strikes as heavy or martial one-handed weapons, by extension all Iron Hand talents and maneuvers should be reflavored this way as a default.” This sentence is odd – I *think* it means that the Iron Hand talents and maneuvers *are* assuming this change, but I’m not sure. Cleaned up wording would certainly help here. This type of glitch is even more odd, considering that the pdf generally manages to get the interesting crunchy bits often right: E.g. ranged blast ki attacks, options to charge them, ki-based miss damage to nearby targets and critical stuns…all in all a fun martial tradition.

Reaper’s Field would be the martial tradition focused on heavy weapons like greatswords and polearms. The practitioners of this style can cause damage even while disengaging. Decreasing enemy PD for one turn upon any even hit or miss – basically, this tradition exemplifies hitting hard and manages to get the feeling right rather well – hitting so hard that, when you have a natural even miss, the enemy loses his next move action, for example…is pretty dang cool. And striking with a 9th level maneuver so hard the ground quakes and causes nearby foes miss damage…yeah, this is cool – mainly because it *feels* like the guy with the big weapon hitting hard.

Sanguineous Rack would be the “evil” fighting style – with fear-instilling in enemies, negative energy damage, harming yourself to enhance your strikes, rerolling villainous relationship dice and even gaining options to reduce MD. Ongoing damage, with feat-upgrades allowing for the increase of the save from default 11+ to 16+…envenomed blades that can also cause the vulnerable, shadow-jumper-style short range teleportation – a cool, dark-themed and pretty trick/debuff-heavy tradition.

The final one would be the Second Soul – said to be either guarded by ancient spirits or perhaps even possessed, these fighters can draw upon a limited array of cantrips, petition the aid of spirits in combat and are, unsurprisingly, particularly adept at hunting the undead, gaining background points via one of the talents. With spirits mirroring your even hits at escalation die 1+, ranged attacks that allow you to teleport to the target, attack of opportunity-causing poltergeist allies…all in all, a cool take on the benevolent, if slightly creepy “heir to greatness”/spirit-themed fighter.

Conclusion:
Editing and formatting are ODD in this one. Whyß Because, on a rules-language level, for the most part, this pdf is exceedingly precise and well-crafted. At the same time, there are more than a few typo-level hiccups, punctuation issues and some wonky and confusing sentence-structures in here…which is particularly baffling since Ray Chapel’s writing is generally precise and to the point in that regard. So yeah, another editing pass would have done this pdf good. Layout adheres to a nice two-column full-color standard, with each tradition gaining a neat full-color stock art that fits well with the respective theme. Annoyingly, the pdf has no bookmarks – but at least an internally linked ToC. Still, navigation is a bit annoying here.

You know, this pdf made me pretty happy – this is Ray Chapel’s first 13th Age supplement, at least to my knowledge, and he exhibits a detailed and well-versed grasp on the rule-set and its peculiarities. More important than that, the fighting styles/traditions introduced herein lend a sense of more unique identity to the fighter class in the 13th Age rules, making the actual playing experience for practitioners of different traditions completely different. Personally, I’m not a big fan of the attribute-substitution-tricks since they produce a bit of unnecessary optimization cheeses with the multiclassing options…but even in that context, they still work. Also important, at least to me, would be that the styles generally seem to be pretty much on par with one another. They feature solid tricks and are sufficiently distinct to play almost like sub-classes of fighter. Now, there is a reason for these traditions to be thus structured and I urge groups out there to retain this structure – cherry-picking options herein can lead to some pretty powerful builds, so unless that’s the focus of your group anyways, I’d suggest retaining the suggested tradition structure.

But how to rate this? Well, as mentioned, I actually really like the crunch and tricks this lets you pull. At the same time, lack of bookmarks, somewhat inconsistent editing and a select few minor hiccups do result in this falling slightly short of its own potential. However, what’s here most certainly is worth getting for the fair price-point. Hence, my final verdict will clock in at 4 stars. I certainly hope to see more such pdfs!

You can get these 13th Age-fighter options here on OBS and here on d20pfsrd.com’s shop!