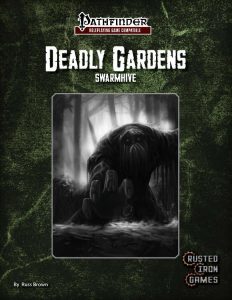 This installment of the Deadly Gardens-series clocks in at 6 pages, 1 page front cover, 1/2 page of SRD, leaving us with 4.5 pages of content, so let’s take a look!

Okay, this time around, we don’t have magic items in the pdf – but there’s a reason for that I’ll get to later. We do get 3 natural items, though: Boggard tongues, 10 feet long, can stretch to up to 50 ft. when used as a short bungee! Sargassumm [sic!] Fiend Pheromones can produce the mirage effect of the creature and finally, swarmhearts can be used to affect the swarms of the swarmhive creature from which it was created.

My experienced readers will have probably noticed the gig by now: Swarmhive is actually a template and sports a brief table to calculate the CR of the new creature; depending on how they align, the table may increase the CR – you take the base creature and swarm and consult the table. As a minor complaint, I think this section could be a bit cleaner in how it works. I read it a couple of times before getting it. The host creature gains the augmented subtype and traits of the swarm minus the swarm or mindless traits. (As an aside, there is a “the” missing in the text here.) The base creature gains the swarm’s senses and while the base creature is supposed to be a plant, a designer’s note acknowledges that this is more to retain the consistency of the product line.

The swarmhive creature receives an aura that works pretty much like the swarm, with the base creature determining the aura radius. The HP of both creatures are added together and the aura’s benefits are based on the respective swarm. Swarmhive creatures can vomit swarm 3/day as an extraordinary ability, with the swarm’s type being equal to that of the base swarm. Problem: I have no idea how long this is supposed to last. Being Ex, this really needs a duration…without it, the creature could generate, provided the time’s there, infinite swarms.

The pdf does contain a sample CR 10 sargassum fiend creature and a CR 7 shambling mound with the template applied.

Editing and formatting are okay, but could use some more clarity; I noticed typos, rules-language hiccups and the like, sometimes to the detriment of the content. Layout adheres to Rusted Iron Games’ two-column full-color standard and the pdf sports some really nice b/w-artworks by Graeme Cunningham and Christian Dragos. The pdf is fully bookmarked, in spite of its brevity – kudos!

Russ Brown’s swarmhive is a cool template in concept, though its current incarnation could have used a bit more polish to really make it shine. The template is neat, but it is not that easy to use and sports a couple of typos. The pdf is inexpensive, though, and well worth checking out for the low price point. Still, I can’t go higher than 3.5 stars, rounded down for this one.

You can get this template here on OBS!