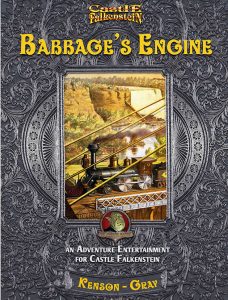 Ladies and gentlemen, gather round, as we elucidate upon this latest adventure entertainment provided for your edification by Fat Goblin Games. It covers a total of 28 pages, with a total of 4 of the pages being devoted to the paraphernalia of such tomes, thus making the totality of the content span 24 pages.

In case your undoubtedly busy schedules should have prevented you from crafting sample dramatic characters, no less than 6 of these have been provided for your immediate enjoyment. These include lavish pieces of artwork and photography and some guidance to properly depict these fine individuals of, as a whole, more or less proper breeding and education, in the entertainment to commence. These individuals are obviously presented in proper hand-out format, as well as in a form that collates the more mundane information in a few pages, as is proper: After all, the host should have an idea of the capabilities and peculiarities of the dramatic characters.

So, the dramatic characters are witnesses and guests of the maiden voyage of the Duchess Elizabeth and they will have a chance to prove their proper upbringing and defend Professor Reinhard from some lower class ruffians – upon doing so, they will have an easy means/hook to get aboard, in the case the host has not yet provided such an angle to pursue. The Professor’s daughter/son (gender depending on the host’s decision, as Alan/Aileen acts as a love-interest) also joins them and they explain the reason for the professor’s presence: The Automated Telegraphic Punched Card Shuffler, a device crucial to the speedy and remote operation of the eponymous babbage’s engine powering the train.

Speaking of trains – alas, it should be noted that the adventure entertainment assumes a degree of familiarity with trains of our age; neither an overview or map, nor a closer depiction is provided, as it acts only as a backdrop for the inevitable arrival of some dastardly scoundrels hell-bent on attempting to kidnap the professor…which, after a scuffle, results in the train’s entire car being stolen via the massive airship that he dastardly villain of this tale commands. Apologies, my dear hosts, for I am getting ahead of myself, failing to note that the train can act as a perfect way to introduce some of the famous individuals of our age – from Arsène Lupin to Mark Twain, there are more than a few famous individuals on board, though these colorful persons and their involvement in the proceedings to come ultimately depend on the needs of the host.

I was elaborating on the villain of this dastardly ploy, correct? Well, one Lord Anton Dire, undoubtedly of questionable breeding, lord of a tin-pot Germano-Slavic micro-nation, has managed to construct this airship, courtesy of a strange material called Radium -and he considers Babbage’s engine to be one step towards his imminent rise to power. The whole capture of the draatic characters, alas, lacks crucial freedom for the respective guests entertained; it is simply assumed that they are overwhelmed and brought into the hidden hangar of aforementioned lord – at this point, I distinctly recalled Mr. Olam telling of a series of tales of a man named “Bond”, projected in mving images, not unlike those generated by a laterna magica; the similarities are peculiar indeed, including an all but moustache-twirling villain-monologue.

The inevitable escape of the dramatic characters from the map-less base of the archfiend is, alas, once again glossed over. This can prove puzzling, to say the least, for we are living in an age of high adventure and it is hard to picture something as adventurous as climbing outside of a train car, hijacked by evil forces unknown, to bring righteous battle to the adversaries…but I digress. The escape is supposed to be relatively easy for the dramatic characters, though I do consider it to be similarly lacking in depth – while Lord Dire does adhere to at least basic premises of honorable conduct, I nevertheless found myself to be a bit flustered here: The adventure entertainment does try to justify the lack of a map for the baron’s fortress, but considering the tropes of espionage, a proper means to plan for the dramatic characters would have greatly enhanced the experience here. It is also puzzling how a lord like Dire can obviously not even contemplate dueling with dramatic characters of proper standing that demand satisfaction – the whole idea has not even briefly been touched upon.

Ultimately, the dramatic characters will have to attempt to pursue the Reinhards and the Baron onto his flying platform (which receives the proper statistics for use in the Grand Game), where the villain escapes with the younger Reinhard as hostage on an ornithopter – and potentially, an interesting chase begins, concluding this brief adventure entertainment with a well-written epilogue.

Editing and formatting are very good, I noticed no serious issues. Layout adheres to a beautiful, elegant 2-column full-color standard and the artworks constitute a wonderfully chosen blend of period piece photography and fitting art. The electronic format sports navigation helpers, commonly referred to as bookmarks, for your convenience.

Grandmaster Stephen Kenson and Mister J Gray provide an adventure entertainment, which structurally mirrors the means of propulsion that is at the center of the proceedings depicted: To put it bluntly, this is a railroad. If an engagement of your higher faculties is what you are looking for, then I do suggest “Firearms & Margarine” instead – which, to me, is the vastly superior offering. Why? Well, this, as the pedestrians would call it, thrill-ride sprints from evocative scene to evocative scene and paints in gorgeous colors a vision that makes great use of the unique peculiarities of this gorgeous world of ours; alas, while the prose paints the proceedings of the plot in poignant highlights, the details that are expected, if we remain within the metaphor employed, remain sketches that are not filled out.

As long as the dramatic characters follow the linear structure of the plot, this works brilliantly, beautifully; however, there are plenty of times when the proposed course of action may not necessarily make sense from the dramatic character’s perspective. Here, the illusion of choice is very thin indeed and as a whole, even in the more open sections of this offering, the host will have to engage in A LOT of improvisation. To cut my lengthy and undoubtedly, sufficiently verbose analysis short: This adventure entertainment buckles under the weight of its own ideas and simply does not spend enough time and pages to adequately develop the respective scenes. As long as you can maintain a brisk pace and the dramatic characters cooperate, all’s well…but there are plenty of potential hiccups if they start tugging at the very thin curtain that’s hiding the wizard. As long as the host maintains the hasty pace, it feels like a sequence of highlights and can work as such.

All of these criticisms may not apply to some groups out there, but for me, this left me dissatisfied on a high level – with about twice the pages allotted for the details and a less breackneck pace, this could have easily went down in the annals as a true masterpiece. In its current state, however, I cannot rate this adventure higher than 3.5 stars, rounded up due to in dubio pro reo. If your group prefers action, then you should round up as well; if you’re like me and prefer Castle Falkenstein of a more versatile, cerebral bent, then round down instead.

I bid you adieu for now, mesdames et messieurs,

You can find this adventure here on OBS!