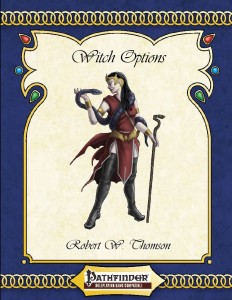 So, if you’re like me and remember the beginning of 3pp Pathfinder, you’ll remember the witch-class by 4WFG, long before the APG. This pdf essentially codifies the 4WFG-witch and makes her tools available for the APG-witch. Got that? All right!

We kick off with 5 hexes – the first, battle rite, temporarily enhances a witch’s dex and con by +4. On its own, not bad; The level 3-minimum caveat prevents dipping-abuse and the daily limit works as well in the favor of this hex. Still, it does have me disconcerted somewhat, especially since the bonus increases to +8 at 10th level. I’m quite sure I can find a way to break this, though one has to exert some trickery to do so – hence, I’ll let it rest.

The ability to use a hex to duplicate spell-like abilities via a broom and turn that broom into a broom of flying at higher levels is neat indeed. Creating zombies (that crumble to dust after 24 hours), making protective circles and a pearl of power style spell recall via her grimoire also make for compelling hex options. Via advanced hexes, a witch can use sympathetic magic via blood to impose massive penalties on targets, ask for the guidance of ancestors etc. The option to gain a smite via a hex feels a bit too much, though – while witches are not a particularly melee-centric class, to say the least, smite has traditionally been a very powerful option. The scrying options fit better thematically.

A total of 4 grand hexes are also part of the deal – a superb heal, a long-lasting shield-style buff (including attribute bonus), DR and immunity to mind-affecting effects or alternatively, a true telepathy/sight-based one make for compelling capstones.

We also receive 6 Patron themes – Black Magic, Demons, Protection, Summoning, Sun and Weather – the spell-selection here is solid, but nothing to write home about – thematically okay, but nothing that wowed me.

A total of 10 new feats are provided herein as well – they range from increased DC for elemental spells to a second patron (and a choice which spell to get), to an AoE-healing hex to a better warding option. Furthermore, circle hexes with the right feat can now inflict half damage on the attacker with the right feat and another one nets you low-light vision or maximizes healing potion efficiency. Faster hexes would also be an option. The feats per se are high concept and generally, on their own, not bad, if powerful options. Alas, unfortunately the respective rules do not exist in a vacuum – from more patrons to faster hexes, the options herein strike me as too strong. Not on their own or when used as intended, but the problem of such feats being available for all witch-builds makes them potential issue-sources. Faster hexes, for example, just beg to be abused, as does the one that rebounds half damage is a true caster/dragon-slayer and needs further nerfing.

A total of 10 spells are also part of the deal – one allows for a gaze-based fright-effect – sans properly using the gaze attack wording/mechanic., one nets you armor + intimidate bonus; There are 6 hag-summoning spells and another allows you to deal damage to foes via witchfire and penalize them. Finally, a level 9 spell allows for a ceremony to sacrifice a target for a paltry array of temporary hit points, somewhat wonky mechanics (why not go coup-de-grace?) and a minor buff, which lasts for a month – still, imho too weak for 9th level and the long, complicated casting.

4 pieces of mundane equipment, from athame to boline are also part of the deal alongside the new CR+1 hagborn template and a sample CR 7 hagborn salamander.

Editing and formatting are very good, I noticed no significant glitches. Layout adheres to PDG’s printer-friendly two-column b/w-standard and the pdf comes fully bookmarked for your convenience.

Robert W. Thomson is a capable designer and it shows herein – his original witch was a nice class and this one opens some of her cool signature tricks for the Paizo-witch-class, which is nice indeed! However, as a certain guy from Gilead would have said, “The world has turned…” – the components per se are not broken; What is problematic, though, would be that the power-boost they net the witch-class with combinations of published material is simply not required. The witch is one of the most powerful classes in Pathfinder and the option to swift/free action cast hexes needs to die. In fact, quite a few of the options herein show that they were not necessarily intended for the power-curve of the witch-class as it exists – they range from solid to “too good,” feeling partially as if they had been made for a player who did not know how to make this class powerful as all hell.

While the hexes generally are solid, especially the feats provided herein simply do too much for too small a cost -which is a pity, for their expansion of hex-based tricks is something I indeed do enjoy. The other supplemental material is solid, I guess…and, one caveat: Yes, I’ve complained about balance in this review for the content herein can be rather overpowered for your campaign. The reasoning goes both ways, though – the pieces of crunch herein *can* work just as intended and wording per se is rather rock-solid. As long as you take heed and care with the content herein, you’ll find some gems. Since I have a policy of in dubio pro reo, I will hence settle on a final verdict of 3.5 stars, rounded up to 4 for the purpose of this platform.

Youc an get these Witch Options here on OBS and here on d20pfsrd.com’s shop!