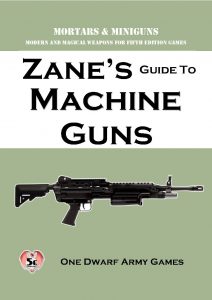 This pdf depicting rifles for 5e clocks in at 12 pages, 1 page front cover, 1 page foreword/editorial, 1 page SRD, leaving us with 9 pages of content, so let’s take a look!

After a brief introduction, we are introduced to the general gun rules herein: Basically, on a natural 1 on an attack roll, a weapon jams and can’t be used until you spend an action to clear it. Guns as portrayed here have a rate of fire – a single shot is just that. A burst of fire consumes 3 rounds of ammo, but adds +1 damage die to the damage output of the weapon – 2d6 become 3d6, for example. This increased power, however, also means that the weapon can jam on a 1-2. Finally, there would be full auto fire, which allows you to target a single 10-ft. cube within long range: Every creature in the area must succeed a Dexterity saving throw (DC 8+ your Dexterity modifier, + proficiency bonus, if any) or suffer the weapon’s damage on a failed save, none on a successful save. Creatures beyond the normal range have advantage on the save, which mathematically and logic-wise makes sense. Saves in 5e are pretty swingy and advantage somewhat alleviates this. Auto fire consumes 10 rounds of ammo and most weapons cannot perform more than one such shot, even if you otherwise would be capable of attacking multiple times. Auto also can jam the weapon on a 1-3.

Additionally, every weapon has an ammo score, which denotes the number of pieces of ammo it can hold before requiring reloading, which consumes an action. Guns can prematurely be reloaded. The pricing for the ammo is pretty pricey, btw. – the least expensive bullets, for 9mm-guns, costs 20 gp per 50 bullets, which renders this ammunition significantly more expensive than e.g. crossbow bolts or arrows (1 gp net you 20 of those, in case you need a direct comparison). Bullets cannot be recovered after being fired, unlike other pieces of ammunition. Machine guns are classified as martial ranged weapons, just fyi.

We begin with a total of 5 different mundane guns, which serve as the mechanical framework: On the lowest end, submachine guns are the only gun herein that may fire single shots. They have ammo 30 and a range of 100/400 as well as a base damage of 2d4. Light machine guns deal 2d6, have 100 ammo, range 150/600 and are two-handed. Heavy machine guns inflict 2d8 damage, have 100 ammo, two-handed and heavy and a range of 200/800. Both have stopping power, which means you may reroll one damage die, keeping the result. Both have a mean recoil (minimum 14 Strength for light ones, 18 for heavy ones) and may fire twice in auto per turn. Both prevent you from moving when reloading. The mini-gatling deals 2d4, have a range of 70/280, ammo 60 and may fire auto twice per turn. As a veritable bullet hose, in burst mode, they consume 10 rounds, but get +2 damage dice; in auto, it consumes 30 rounds, but adds +4 to the save DC. It prevents you from moving when reloading, much like the final gun, the minigun. This one also has the bullet hose, gains two auto fire attacks per round. It deals 2d6, has a range of 100/400 and ammo 100 and is both two-handed and heavy.

All right, the basics out of the way, let’s take a look at the magical machine guns. As always, you will notice elemental-themed guns that inflict bonus damage and an additional effect. Alas, much like in the installment on rifles, the option to reroll damage via stopping power leaves it open whether the bonus damage may be rerolled or not. Fans of the series may also recognize some of the abilities here, as some have simply been added to machine guns. This does not extend to all, though: Two-round single-shot machine guns that inflict 3d4 base damage instead is okay…but pales before Fearless Guardian: You may drop this gun as an action and have it become a semi-intelligent construct: You can use your bonus action to command it to attack and yes…sentry-mode gets its own creature stats and includes notes on repairing. Ferocious Claymore lets you add a spray of 60-ft.-shrapnel via charges and Grand Inquisitor requires a Wisdom save or fail at casting spells for 1 round….which can be nasty for non-Wis-based casters. Hallelujah lets you auto-fire at larger squares via charges and the gun can negate cover-based bonuses. Infiltrator lets you expend charges to activate a variety of spell-based effects – I assume them to still require concentration, but am not 100% sure. Junior Painless lets you modify the size of your full auto attacks – the smaller the area, the higher the DC. Nice one.

Madboy lets you fire bursts as a bonus action; Mauler & Mowler inflict additional damage when used together and hitting foes on 18+. Here, we have an issue: TWF usually requires light weapons…which the submachine guns are NOT….so sans Dual Wielder, these can’t RAW be used as intended. Now the Guns Akimbo feat does not a way to mae this work, but that’s two feats for the rather small benefits…and the rules, frankly, could be presented more concisely here. Granted, a new feat should take care of this…but it’s still restricted to light weapons. Smart Cookie lets you exclude foes in full auto to increase the damage versus a target…which can be odd: Use allies/kittens and you suddenly deal more damage? Weird. Splitfire lets you split up the full auto-area in 5-ft-squares, which is kinda cool. Summoner is weirdly named, but has a cool trick: Establish a circle of 60 ft. as a bonus action; thereafter, sans reaction required, you may fire at foes that enter the circle, though you expend charges.

The pdf also features new class options, the first of which would be 2 feats: Guns Akimbo lets you TWF with light firearms and proper synergy with TWF.Machien Gun Expert reuced Strength-requirements for recoil, lets you reroll 1s on damage dice, allows you to move up to 1/2 your speed while reloading and increases the auto-save DC by 2. Imho a tad bit too much – I’d eliminate the damage reroll. The pdf provides a new fighting style, which lets you add proficiency bonus to full auto damage. The pdf also has a new martial archetype for the fighter class, the heavy gunner. At 3rd level, these guys impose disadvantage on foes that fail to save versus your full auto and halve their speed for 1 round. At 7th level, things get interesting: When you take damage, you may make a Con-save with a DC equal to the damage taken; on a success you take no damage, half on a successful one. You need to finish a short or long rest to use this again and may use it an additional time at 15th level. At 10th level, you may double round-consumption in auto to affect two 10-foot squares (how does THAT interact with all the square-modifications the magic guns grant? No idea…) and at 15th level, the character gains advantage on saves versus being charmed or frightened as well as a higher chance to not fall prey to death saving throws. At 18th level, you inflict +1 damage die in burst and full auto and targets that save versus your full auto still take 1/2 damage.

Editing and formatting are good on a formal level, but on a rules-level, there are a lot of small issues that accumulate -less than for the rifles, but still. Layout adheres to a printer-friendly two-column full-color standard and the pdf has no artworks apart from the cover, but comes fully bookmarked for your convenience. As a minor nitpick, one page is almost empty – that does not feature in the final verdict, but in case you’re particular about that kind of stuff, you may want to know.

Georgios Chatzipetros’ supplement for machine guns is more refined than the rifle installment: I really like many of the auto-fire modifications and while I disagree with some of the balancing aspects, as a whole, there are some seriously nice things to be found. Now, alas, there is some ability-overlap with the previous file, rendering this, to me, slightly less compelling from a diversity point of view…and unfortunately, this means that it does inherit several of the glitches I complained about in the aforementioned book. At the same time, the engine for machine guns is more stable, ironically, than that of rifles, generating less issues. There still are some wonky tidbits and crunch that should be more precise, but at the low price, this is still a fair offering. Not perfect, but it does offer some gems. As always for the Mortars & Miniguns books, you should be aware that the damage output of guns vastly eclipses that of traditional weapons and thus renders the game significantly more deadly. I believe that to be intentional considering that the books generally adhere to a base-line regarding damage caused, hence I will not penalize the book for this. All in all, we have a mixed bag with some cool ideas and rough edges here – pretty much the epitome of a 3.5 stars file, rounded down to 3 for the purpose of this platform.

You can get the whole series here on OBS!
Endzeitgeist out.