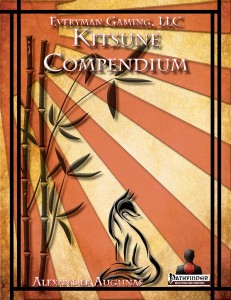 This massive pdf clocks in at 29 pages, 1 page front cover, 1 page editorial, 1 page SRD, leaving us with a massive 26 pages of content, so let’s take a look!

Base Kitsune, as presented herein, receive +2 Dex and Cha, -2 Str, are medium shapechanger humanoids, get +2 to acrobatics, may change shape into a specific human form, receive +1 to the DC of their saves versus enchantments, low-light vision, a bite attack that deals 1d4 (I assume usable as primary – since that’s the default for bites, but still wished the Kitsune-entry in the ARG, from which this was taken, had specified that -I like my racial information in one place, if possible…) and Kitsune with a Cha of 11+ may cast dancing lights 3/day as a spell-like ability.

Got that? Well, this is, of course, not where everything ends here. Let me embark on a slight tangent, okay? One of the issues I tend to have with race-supplements would be their tendency to create some crunch, slap some fluff on it and then assuming an alignment-based psychology and culture. That’s boring. That’s just slapping new crunch on a blank humanoid frame. There is more to a race – its psychology ought to be complex, its abilities should influence the society and the morals of the creatures and their interaction with other races should also be taken into account – essentially, a well-crafted race ought to be a significant choice beyond min-maxing crunch and feel distinct. Well, this pdf helps those not familiar with Kitsune mythology by leaps and bounds – from general observations on psychology to 5 “facts” everyone knows about them and their behavior, which provide amusing tidbits and maxims to their biology, physiology – in a level of detail only seldom seen nowadays – taking even their digitgrade stance into account, though, of course, as just a cosmetic detail you may ignore.

Now the cool thing about aforementioned “facts” and other fluff, beyond helping craft a distinct racial identity, would definitely be that these guys receive quite an array of alternate racial traits that are based on these observations – from being able to always take 10 when disguising as human to limited fey sorcery and even a ki-pool (that does thankfully NOT stack with other ki-pools), the racial traits are generally rather awesome – one of the traits, though, strikes me as a tad bit too strong – nimble dasher nets the Kitsune +5 ft. movement (+10 ft. in true form) as well as the run-feat – exchanged only for the agile-trait of the base race. Compare that to another alternate racial trait that nets a +1 bonus to three skills and makes one a class skill and you’ll notice somewhat of a discrepancy here – not a game-breaking one, mind you, but still one I felt obliged to mention.

Beyond these, we are also introduced to Kitsune culture -from birth to marriage and death, the book is surprisingly detailed here – including information on architecture, crafts, languages, names and even cuisine (!!!) as well as relationships with other races. Beyond that, this compendium takes a cue from the best racial supplements and provides an extensive origin myth – rather interesting here: The origin myth has representations in crunch as well, this time in the guise of 3 bardic masterpieces – one allows for the lessening of conditions (cool!), one creates wandering star motes and one provides a powerful calm emotions. Nice ones!

Of course, in such a comprehensive take on a race, racial religion (including anew deity and two associated subdomains) and its peculiarities can be found as well. If you’d prefer a somewhat variant take on the Kitsune, you might be interested in the 5 general variants – the default kitsune are Earthkin and beyond Voidkin, the three other classic elements are covered with at least one subtype-exclusive racial type – each subtype receives a short take on the peculiarities of the clan they belong to. Now, the following is a nitpick, I know. It won’t influence the final verdict. But why not use the eastern elements instead of the western ones? Feels more logical to me, but oh well – personal preference, I guess. FCOs for many classes, including ACG-classes, can also be found herein.

Now polytailed kitsune have been popular in fiction and the misconceptions regarding them are addressed herein as well – including nice suggestions that a DM may govern to determine possible reasons for why a kitsune has more than one tail -from being mythic to blessing, bloodlines and ki – the options are interesting. Jiuweihu exchanges the shaman’s spirit animal with a star jewel and receives magical tails over the course of the class progression. The Kyuubi Visionary monk replace stunning fist with selective spell-like abilities and even combine these with flurry of blows, casting one spell in lieu of his/her highest BAB attack Messing with flurry of blows is a complex endeavor, but Alexander Augunas pulled it off this time – kudos! The Nine-tailed Mystic for the oracle has a nice synergy between magical tails and spellcasting.

Non-nine-tailed kitsune also receive new archetypes – fighters may opt to wilder in the swashbuckler’s toolbox, while a new ninja archetype can use ki to enhance her shapechanging – learning to assume new forms and even beasts and plants: nice infiltrator! The swashbuckler may opt for the ronin archetype, combining unique deeds with order abilities. Rogues may wilder in kitsune-exclusive tricks (great and thematically fitting!) and make one-handed weapons eligible for finesse via new talents. Skulking Hunters receive extended spell-lists to choose spells from (taking spells that show up on multiple lists into account) – nice. Additionally, studied targets of the slayers replace animal focus. Inquisitors can choose to become communal guardians. These guys establish a link with certain individuals and tie this connection with judgments, teamwork, movement etc. – somewhat akin to how Tacticians can establish networks – rather cool! Two new hexes allow for a jewel-shaped familiar, allowing the familiar/intelligent item to be magically enhanced while in gem-form and better shapechanging with access to skulls makes for a cool blending of hex and racial ability. Now rather interesting would be the decision to provide not one, but two kitsune bloodlines – one for the bloodrager and one for the sorceror – rather than trying to jam one bloodline in and make it fit for both, this way we receive better tools for both classes. The bloodrager transforms into a foxlike quadruped upon raging and learns to cast even while in bloodrage, receiving some truly deadly bite-tricks as well – nice! The bloodline for sorcerors has a completely different focus, centering more on illusions, shapechanging and similar mischief – neat as well!. Wildblooded sorcerors may also elect to choose the nine-tailed bloodline to receive access to a ki-pool and several ki-powered tricks, while the oni-based nogitsune bloodline is not hampered by the dark and has particularly potent compulsions.

Now next would be magic – which includes takes of Kitsune, in-character, on the respective schools. Nice! A total of 3 new spells are provided, one granting the target an animal head, one balefully transforming targets into foxes (with the potential to retain or lose their special tricks) and one version that shifts creature’s heads to those of animals AND potentially reduces their int to animal levels as well – amusing and potentially disturbing, if done right!

Of course, a book like this also sports new feats – here, we receive equipment tricks for kitsune star gem and the new concealment-granting fox-style focused on feints and its follow-ups are rather well made – thankfully taking the stealth-hiding caveat into account. Kudos! Feinting versus foes set to counterspell your magic is also an interesting option – but what I personally like more, would be something completely different: Remedial shapechanging – difficult, non-overpowered healing for shapechangers as an optional rule, limited daily to prevent abuse and expandable via new feats – thematically fitting, logical and concise – two thumbs up!

The final page of this pdf is devoted to an array of cool traits and a fitting drawback for kitsune, involuntary shapechange – all rather iconic and well-balanced!

Editing and formatting are top-notch, I noticed no significant glitches. Layout adheres to a beautiful 2-column full-color standard that sports several stunning, original full color pieces of art by Jacob Blackmon. The pdf comes fully bookmarked for your convenience. Now there is a minor downside – the pdf, due to its layers, loads rather slowly – if you’re using this on an electronic device, that may be annoying. I happen to know, though, that Alexander Augunas is trying to fix this as per the writing of this review and if you’re like me and print books out, no issue.

Alexander Augunas *loves* Kitsune and it shows – I am of the firm conviction that passion for a product always shines through in the end and this is no exception – from the level of detail and attention devoted to cultural and psychological peculiarities to the tie-in of said pieces of information with appropriate crunch, this book reflects well the enthusiasm of Mr. Augunas. Now, the downside of quite a few such projects tend to be that they overshoots the target, resulting in somewhat Mary Sue-ish options that fail to properly balance coolness with the general rules – to say I was skeptical would be an understatement.

And here, on can see the author’s experience – the amount of important, but easily missed rules (concealment-stealth, to name one example!) this pdf catches in its options is indeed laudable and shows the experience of an accomplished designer. The crunch, though, is honestly not what I’d consider the crowning achievement of the pdf – this honor belongs in my book to the fluff and the fact that it’s so ingeniously tied to the crunch. Indeed, this book makes kitsune feel like a proper race – distinct, unique, fun – this is essentially an ecology for the race PLUS crunch tool box. And then there would be the icing on the cake on a meta-level – there is a paradigm regarding racial archetypes and class options in general – if something can be achieved by any race and does not build on a race’s unique options, it probably should not be a racial option. Good racially-specific crunch builds on existing abilities and this pdf does just that for not only a content-wise great book, but also one that pleases me on the level of rules-aesthetics.

All right, so how to rate this? Its fluff is glorious, the crunch is nice, it oozes passion, has at best the most minor of issues…and it is a fun read. My final verdict will clock in at unsurprising 5 stars + seal of approval, now can someone please give all those identity-less, fluff-wise boring and underdeveloped ARG-races please a similar treatment? Please?

Youc an get this great racial supplement here on OBS and here on d20pfsrd.com’s shop!