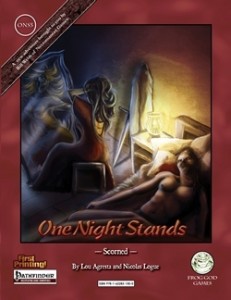 This being an adventure-review, the following review contains SPOILERS, potential players are advised to jump to the conclusion.

All right! Whiterush is a little, relatively peaceful town located adjacent to a river (hence the name) and makes for a rather  iconic place – the sample NPCs and rumors to be unearthed show as much. Obviously, the local lord, one lord Breldin Greaves has seen better days and is quite glad that his son, who used to spend a lot of time in the local forests, finally settled down – love at first sight, and with the daughter of the newly moved in Zoltan Quinn. A powerful man, he came with many henchmen and even a whole stable of hippogriffs that since then have been patrolling the city and replaced the guard – much to the chagrin of e.g. washwomen, who complain about horse-droppings from the sky. Wacky hijinxs with the iconic populace make for a great start that shows already the trademark subtle humor and imaginative ideas we’ve come to adore from both Lou Agresta and Nick Logue. But what’s the adventure-potential?

Well, said Zoltan Quinn hires the PCs (sealed in blood) to deal with the constant attacks on his caravans – the local orcs have been sending his men beaten black and blue back to town. Racist adventurers will probably need no more goading, but observant PCs may realize that the orcs don’t kill the men – weird, isn’t it? Well, joining the Quinn-caravan is thoroughly unpleasant – stinking, abrasive guards will make for an unpleasant ride as the caravan willingly drives straight into an ambush. In the battle, the PCs will face the orcs – who use non-lethal weapons all around, while Zoltan’s men try to kill the greenskins. Instead of dumping exposition on the PCs, they can turn upon their employers and join the orcs or repel them – only to have to track them to their extremely iconic camp – a  collection of tree houses spanning islands on a river.

Provided the PCs switch sides, they get to interact with the orcs – who actually are EXTREMELY funny – learning crafts, laughing about local customs, seeing aspiring orc-children dragon-slayers and tasting local cuisine is all possible. This section is rather interesting, for the PCs learn something interesting: It turns out that the heir Brant Greaves was actually deeply in love with one Sragana, a true beauty – for an orcish maiden. The secretive lovers planned to elope if his father didn’t approve of their love and she is subsequently infuriated by his betrayal, thus trying to keep the Quinn’s dowry in order to keep Brant and Zoltan’s daughter Jacklyn from marrying. If the PCs are only partially adept at magic matters, they may suspect enchantment – and just as they’re getting ready to explain everything to the assembled orcs, Zoltan’s men attack via their hippogriffs in force.

Having scried the PCs via the blood spilled in the beginning, the PCs are now officially on the kill-list of Zoltan’s henchmen – even if they so far have stuck to their employer’s order. In the ensuing epic battle, the PCs will have the pleasure of fighting these unlikable louts in one of the neatest environments I’ve seen in quite a while.

After the climactic battle, it’s time to crash a wedding – the problem being that the whole wedding party aboard a paddlewheel barge has already left town. In order to stop the proceedings, the PCs will have to sneak abroad (not too easy due to a LOT of potential civilian victims and guards) and save the lord and his son – worse, the Quinns have a good escape-plan that the PCs will have to foil. Have I mentioned the ettin that actually drives the paddlewheel who may (very painfully) smash the PCs into the wheel? The fact that the steering is destroyed and that the ship is headed for massive waterfalls? That an overhanging outcropping will demolish a significant part of the barge? And that beyond the battle with the Quinns and subduing the charmed Greaves, the PCs will have to save the whole wedding party from plummeting to their death? The latter makes for an extremely cool idea and is something I haven’t seen in a module before – temporarily jamming the ship at a bottleneck, using a harpoon-like ballista to temporarily anchor the ship – there are quite a few ways to help the hapless civilians escape a watery death in the dread rapids of the river.

And finally, the PCs get a chance to make sure the both Brant and Sragana may live happily ever after – and that there still will be a marriage.

Editing and formatting are top-notch, I didn’t notice any glitches. Layout adheres to Frog God Games printer-friendly b/w-standard with neat, original b/w-artworks and the copious maps provided are awesome – but they lack a player-friendly, keyless version to be handed out, which is a slight bummer. The pdf is extensively bookmarked with nested bookmarks.

This adventure was a surprise to me- and at the same time it wasn’t. I expected a good module from two of my favorite authors out there (Lou Agresta & Nick Logue), but what I got is touching, exciting, iconic – Addressing themes like fantasy-racism, love, the worth of life and the repercussions of taking a life, the relevance of alignment and race and tying everything together in an action romp that quite literally has NO FILLER. None. Every combat, every social interaction, every rumor in town features some piece of absolute awesomeness – from neat puns to sample quotes, from characters that deserve the name, to interesting tactics/builds, smart-acting adversaries and last but not least absolutely superb locations and environments to adventure in, this pdf is chockfull of awesomeness and makes for a superb little module that you definitely should check out at its extremely fair price-point.

My final verdict, unsurprisingly, will clock in at a full 5 stars + seal of approval for this neat module.

You can get this awesome piece of writing in two versions: For Pathfinder, OBS has it right here and on d20pfsrd.com’s store it’s right here!

If you’re rather old-school and prefer the Swords & Wizardry rules,  here is the S&W-version on OBS and here on d20pfsrd.com’s shop!