101 Not So Random Encounters: Winter 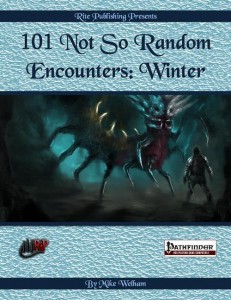 This installment of the 101-series is 40 pages long, 1 page front cover, 1 page editorial, 1 page SRD, 2 pages advertisement, leaving us with 35 pages of content, so let’s take a look, shall we?

Mike Welham has a tough act to follow up – in case you’re not familiar with Rite Publishing’s 101 Not So Random Encounters: Urban – that pdf introduced us not only to a massive array of encounters (both fluff-only and crunchy with templated weird creatures), but actually linked them with essentially a monster’s mafia meta-plot that would make it possible to craft a WHOLE CAMPAIGN from its encounters – the bang-for-buck ratio was simply glorious. Mike Welham took this approach as a template and began crafting – and the results are interesting, spanning CRs from 1/2 to 23, organized from the highest CR to the lowest in the book. As an additional means of organizing the content herein, the final page contains tables that organizes the encounters by effective party level, showing you the appropriate encounters organized by page.

That being said, since essentially we get a whole array of interwoven encounters/characters, the following part of the review contains SPOILERS.

The main-mover/mastermind behind this pdf’s array of encounters is one Halbin Brindlefrost – one glorious beast of a level 20 half-fiendish arctic druid – shunned from birth due to his odd blue skin-tone, he was tainted both by birth and his adventuring career and has since gained control of the frostfire font, a well that allows one to add the frostfire template  – he is the main source of encounters herein, endeavoring to bring eternal winter to the region of Nordhelm. Slowly, as the cold is inexorably creeping southwards, the druid schemes and waits for his frozen utopia.

And his experiments have yielded results – he has for example managed to create a fire elemental dragon suffused by frostfire and there also is a massive barbarian 12 of the frost giant-species – dread jarl Vannis and Gregor Tantalus, a level 19 Tiefling Graveknight Wizard and Halbin’s childhood Halfling Sorceror friend and so much more (all of which come with full stats) – take for example the fluff-only awakened glacier inhabited by a tarn linnorm or a recently awakened bandersnatch – indeed, primal forces accompany the onslaught of winter. And yes, a humbaba can also be found in the higher echelons of the encounters herein, as can Gregor’s deadly adamantine golem. We also get e.g. twin nightwalker nightshades, a slorath or a thunder behemoth – “winter is coming” takes a whole new apocalyptic meaning when taking a look at the dread forces unleashed…

Of course, Winterwights (at CR +4, template included, as well as a winterwight adlet with full stats), CR 16 abhorrent sowmen and similar iconic beings are in here – but cooler, at least to me, would be one Jargath Snagglejaws, a bizarre nine-headed Jotund Troll. Beyond varying giants/trolls, we also get willow creepers and deadly elasmotheriums (i.e. giant wooly mammoths) serving directly or indirectly, the mastermind of the winter. Speaking of the devil – the PCs may find unconventional allies in the guise of an arctic dragon and a fully statted Drachenchor lich shade, both once at the apex of the north’s power-structure, now displaced to mere second class by Halbin and his primal forces unleashing assault. The thematically fitting Frozen Corpse creature template is reprinted (from 101 Not so Simple Monster Templates) and utilized in this pdf. The frostfire font’s powers have also e.g. enhanced the powers of gellid beetles and a winter-wolf-sired pack roams the land, as do the numerous half-breed offspring of the fecund dragon Hidegseggia, smilodons and similar prehistoric predators roam free.

Beyond these, ogres, covens of hags, ogre spiders, failed and abandoned experiments of Gregor and Halbin and finally arctic tengu druids might make for interesting encounters.

Editing and formatting are top-notch, I didn’t notice any significant glitches. Layout adheres to RiP’s two-column full-color standard, tinged in a thematically-fitting blue. Artworks are mostly stock of varying quality. The pdf comes fully bookmarked for your convenience.

Much like its direct predecessor, this pdf provides enough encounters to fuel a complete campaign, oozing with great ideas and providing a treasure trove of creatures that can not only act as a great supplement to Reign of Winter-campaigns, but which could easily stand on its own – full of glorious ideas, it evokes an imagery of frosty cataclysms and primal incursions – a thoroughly well-crafted supplement that once again cements Mike Welham as one damn fine writer. I whole heartedly encourage you to check it out and remain with a final verdict of 5 stars + seal of approval.

Strike at your PCs with a cold-snap they’ll never forget – here on OBS or here on d20pfsrd.com’s shop!