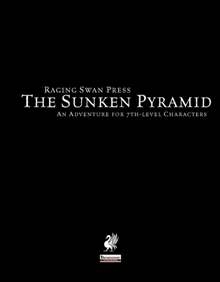 All right, still here? The sunken edifice close to White Moon Cove (or any other coastal village…) has become the new throne of the Atl’utaal-tribe – and found a weird being known as Nahuatal: Which demands blood sacrifice of sentient beings. If you haven’t guessed  -players will need to delve into the depths and a list of abilities are noted that will greatly help in exploring the sunken pyramid – preparation is essential,  for underwater adventuring is not particularly simple. Before we delve into the meat of the module, we essentially get the full Village Backdrop for White Moon Cove (please check my review of that one for a more detailed look) -complete with Village Map (which can be btw. downloaded as high-res versions for free on Raging Swan Press’ homepage), rumors etc. And, of course, we also get varied different adventure hooks to draw the PCs into the action. Now that basic set-up is out of the way, we’ll also by this point have read an ecology on sahuagin that will help depicting them and their culture  -including nomenclature, religion etc.

We also get a timeline of 13 days that should feature enough events to draw the PCs into the action as well as potentially even providing some support. Now it should be noted that this module does not take the easy route out and indeed does not provide magic items to cancel out the environmental peculiarities of underwater adventuring, but more on that later. The action kicks off with a sahuagin raiding party assaulting the docks of White Moon Cove and, as with every encounter, scaling information (e.g. to either EL 9 or EL 11) are provided as well as a wide array of different terrain specifics that may be utilized as cover, broken etc. – rather neat and in the level of detail we’ve come to expect from raging Swan Press.

After the raid, doing some research and getting some information in the town, both via rumors and NPC-interaction, the PCs will have to settle off aboard a vessel towards the sunken edifice and delve into the depths – and here, the crawl starts becoming rather interesting – in contrast to most modules I’ve seen, we actually get information on counter-tactics of the inhabitants, organized defenses etc. – so PCs better be on their a-game when exploring the pyramid. Oh, and if you’re like me, you’ll also enjoy the, which cannot be emphasized enough, vast amount of details to be found herein – which actually makes this location work organically and make it seem plausible – there for example is a kelp/seaweed farm found herein. While perhaps looking like something irrelevant, it is VERY relevant – your unconsciousness will notice such details and they will help immersing both you and your players into the module’s alien vistas.

Or e.g. skull-filled niches, barracks with a variety of items hidden? Beyond even random encounters, we also get dressing-tables for e.g. the second level – and then there are the Cal’ Mecac Teachings – a combination of pictograms and aquan texts teachings  that are simply awesome and give a fascinating insight into sahuagin culture. Want an example? Here you go!

All the world is a grave and none escape it

A warrior hastens to send blood

to the vast realm of the gods.

Once exulted in pride, majesty, fortune and power,

nothing recalls a warrior when gone but his deeds.

And yes, we get more of them! Two thumbs up for this very immersive pieces of fluff – they serve to vastly improve the alien sense that sahuagin mindset should evoke. Alien? Yes, for  even the young and females demand no quarter, nor give it – vicious foes abound, even before meeting bone oracles and skeletons made from shark jaws… – though not all is a killfest. Aforementioned oracle, sinister as he might be, actually wants the PCs to slay Nahuatal and may offer some crucial hints that may well mean the difference between a repudiated assault and a successful infiltration… Of course, disposing the oracle and defeating his necrophidius guardian and enervation-beams blasting skulls is also an option for less diplomatically-inclined PCs.

It should also be noted that even the treasures that can randomly be found in sahuagin quarters are interesting – shark-tooth carvings, for example. Since underwater combat is different – so are the spell-lists and the tactics based on the spells – e.g. by the sorcerors. A nasty surprise for PCs not familiar with Malenti (i.e. sahuagin that actually look like aquatic elves!) is also waiting in the wings as one hard-hitting assassin – and assassination in 3d, with kelp-beds as cover is nothing but cool! Speaking of interesting battle/terrain uses – what about a stone oracle swimming in and out of walls via Earth Glide? Yeah, nasty! Ally-wise, the PCs may also enter the fray in a sahuagin-arena and save a doomed triton gladiator from being torn to shreds and l00t-wise pillage sahuagin armories and barracks (also for magical items wi8th neat unique fluff) -before invading the throne room to save a merfolk damsel in distress (and/or an imprisoned sea hag)s and SUFFER against Baron Xilochtel – a four-armed mutant giant sahuagin magus.

Have I mentioned devious traps like poisoned sea-weed curtains or that that’s not all? For it isn’t – even beyond the deadly baron, beyond the sahuagin cleric, in the depths, dread cleric No’Chilok and Nahuatal, the drinker of souls stand between the PCs and the freedom of the hostages/sacrifices to be – and the CR 10 ancient shark-abomination with its deadly breath weapon and ability to smite good/swallow whole is DEADLY – hence also the advice on how to avoid TPKs and scaling it down – it should also be noted that the fully depicted NPC-hostages feature two combatants that could mean the difference between life and death – nice!

In the appendix, we get full write ups for Nahuatal as well as Sharkjaw Skeletons and also magic items – like crystal sahuagin skulls, shark tooth amulets and the item called “Obsidian Trident” – which houses the personality of Pyvanel, a long-slain merfolk sorceror – whether they keep it or return it, they’ll have gained useful allies – whether in the tritons or in the very weapon itself.

The second appendix is gold and essentially consists of a massive DM-cheat-sheet that makes running underwater adventurers so much easier, it’s glorious – all the compiled information, including the effects of swim speed/freedom of movement and attack/damage modifications make running this actually surprisingly easy on the DM.

The final appendix contains 6 pregens for your convenience.

Editing and formatting, as we’ve come to expect from Raging Swan Press, are top-notch. Layout adheres to an elegant two-column standard and the b/w-artworks and cartography are nice. The pdf comes fully bookmarked for your convenience as well as in two versions, one optimized for print and one for screen-use.

This has been a long time in the making -and it shows: Polished to a gleam, this module shines like a pearl in the murky depths – in spite of its hard challenge of living up to one of my most favorite trilogies of all time – my direct comparison for this one is the legendary 2nd edition Monstrous Arcana Sahuagin Trilogy and much like the first installment of said module, I want MORE. Marc Radle and Creighton Broadhurst should definitely go for sequels, for this underwater sojourn left me wanting more. Now if I had to nitpick, there would be two minor things I could complain about – the reprinted information from the White Moon Cove-village backdrop means that the two products have some overlap, but since the bang-for-buck-ratio still rocks, so no issue there. Beyond that, I would have started drooling if this module had a web-enhancement for the buoyancy-rules/Cerulean Seas-rules by Alluria Publishing, but the absence of support for that does not drag this down in any way, since both can easily be combined. (In any case, I’d still recommend Cerulean Seas for ANY campaign – you won’t find a better underwater adventuring resource anywhere!)

But where the module is working best is hard to describe – it’s in the details – almost subliminally so. We’ve come to expect terrain peculiarities and things to do with chairs, tapestries and similar items in other RSP-publications, but the attention to detail is not all that makes this work – it is the combination of the details, the implied culture of the sahuagin that can be glimpsed at in tantalizing minutiae the mind cobbles together over the module’s course to a glimpse of a vastly larger whole, the jigsaw-like minutiae that evoke one’s anthropological and archeological curiosity combined with smart nomenclature that makes this work. What do I mean with smart nomenclature? Well, do some basic etymological research into the name “Nahuatal” and you’ll know what I mean! (And if you can’t find it, feel free to drop me a line and I’ll explain!)

All in all, we get one awesome, first class underwater module – one I really hope will result in more modules, sequels – MORE! Final verdict? Unsurprising 5 stars + seal of approval – you’ll never find an underwater module as easy to run as this one while still remaining engaging, concise and just smart – even beginner’s DMs should have a nice time running this and as a change of pace, are encouraged to take a look as well.

Don’t let this one slip by – get it here on OBS!

Still not sure? You can check out a FREE PREVIEW here!