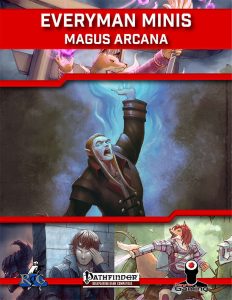 This installment of the Everyman Minis-series clocks in at 7 pages, 1 page front cover, 1 page editorial, 1 page introduction, 2.5 pages of SRD, leaving us with 1.5 pages of content, so let’s take a look!

This supplement contains a total of 15 new magus arcana, so let’s take a look!

-Abundant Metamagic: This arcana needs another arcana that adds metamagic effects to a magus spell with daily uses, and allows for the payment of arcana points to not expend the limited uses of such metamagic enhancer arcanas. Nice. Should probably specify requiring such an arcana as a prerequisite, though.

-Augmented Aspergillum: Upgrades the damage of the holy water in a battle aspergillum wielded in conjunction with spellstrike. Damn cool!! Love it!

-Blunt Strike: When dealing nonlethal weapon damage, the magus may choose to make the spell delivered via spellstriek nonlethal as well. Nice one!

-Combat Trapper: Another winner, this one allows for mancatcher magus use, as well as the channeling of spells into said catcher. Super iconic – picture the elite squad, subduing dangerous folks that way…Two thumbs up!

-Consume Spells: Nets consume spells for magus arcane pool points instead. Not a fan, as it delimits the resource. It also doesn’t work RAW: The arcana specifies items as source, not magus spells, which generates a ton of questions regarding if they go dormant, if items wielded by enemies can be targeted etc.

-Ethereal Strike: Pay arcana when using spellstrike with ghost touch to bypass incorporeal traits with the spell. (Has a min. level cap that holds it in check.)

-Hypnotizing Strike: Use hypnotist’s lockets or nunchakus to add Reach Spell to touch attack spells, but these do allow, thankfully, for a save.

-Magus Exploit: Replace an arcana with an arcanist exploit. Not a fan.

-Polearm Sweep: Cool one: Modify a cone-spell to instead affect all squares threatened with polearm, min 6th level.

-Sand Spray: Use poisoned sand tubes to deliver touch spells as part of a ranged attack, changing delivery method and allowing for a unique, cone-shaped variant with a short-range and tight rules. That being said, the arcana should specify that the three spells that can be imbued at once in the poisoned sand should have a limitation regarding casting time. That being said, impressive to see the spell recall synergy here done right.

-Shining Limelight: liming weapon property added, plus unique debuff added, though that one should have a duration stated.

Editing and formatting are very good on a formal and rules-language level, with not much to complain about. Layout adheres to Everyman gaming’s two-column full-color standard, and the pdf sports a neat artwork. The pdf has no bookmarks, but needs none at this length.

Jen McTeague is an author who needs more work. So far, I have been impressed by everything she has penned, and this is no different. At this point in time, it is remarkable that a class as well-supported as the magus has still so many blind spots, and many arcana within actually allow for thoroughly exciting and unique combinations. I do consider a few of them to be slightly problematic, but similarly, there are more than I expected that I really ended up loving, that managed to inspire me. And, as always, I prefer daring design and complex tricks over bland and safe perfection. This humble pdf had more arcana inside that made me come up with character ideas than almost every such file I have previously read. As a reviewer, though, I have to take these minor flaws into account, which is why I can’t rate this higher than 4 stars.