EZG reviews Under the Knife: The Grafter, a Tinker Prestige Class

Under the Knife: The Grafter, a Tinker Prestige Class 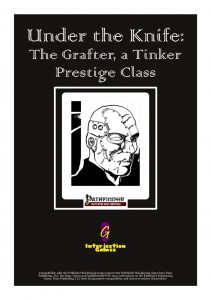 This Tinker-expansion clocks in at 6 pages, 1 page front cover, 1 page SRD, leaving us with 4 pages of content, so let’s check out the Grafter!

Mechanically, we have a 5-level PrC with 10 ranks heal, 7 ranks knowledge (engineering), skill focus (heal) and 3rd level invention/blueprints as prereqs. The class gets d8, 3/4 BAB-progression, good will-and fort-saves and 4+Int skills per level, but ONLY heal and intimidate as class skills. They also get full invention-progression, with the important caveat that BP per blueprint DO NOT increase via grafter level.

Got that? All right. At first level, a grafter gains a grafting pool equal to class level X 3. These points can be used as BP to apply inventions to the grafter’s own body when preparing inventions and do not replenish, unless the grafter removes a given graft to free points. Inventions with limited uses per day refresh upon blueprint-preparation and at 3rd level of the class, the grafter may apply grafts to others as well. Inventions that require activation also require at least int 3 (no grafted oozes, sorry) or int 11 on behalf of the controller in the case of controlled unintelligent foes (like undead). This also provides an interesting precedent for similar master/minion relationships with other creatures such as constructs. A given creature can maintain a total of grafter’s int-mod in BP as grafts at a given time.

Now there are restrictions – skill bonuses, class skills and proficiencies cannot be granted via these grafts and any untyped bonus for an automaton becomes an enhancement bonus for an intelligent grafted creature. If a graft requires a given feat via an invention and the base creature also has that feat, it can take the follow-up invention as a graft, but graft-granted abilities cannot be used as prerequisites to qualify for feats etc. Got that? Good!

At first level, the grafter also learns to add int-mod to wis-mod regarding heal-skills (NOT a fan of two attribute-mods to one skill). As you may have noted, grafters can be somewhat neutered in their grafting capabilities by their graftees simply walking away – this is remedied at 3rd level, when they get full control over their grafts, allowing them to declare them obsolete when resting and thus making them break/reclaim their grafting BP…which allows for nice roleplaying potential: “Yes, Mr. Ogre…I can graft you so you can eat those knights in the castle.” *ogre flies off with rotor* “I declare it obsolete.” Ogre falls…far. (Though this does, unfortunately, not work – design-inventions can’t be grafted…)

At 4th level, the class nets those grafted with 5 BP or more one of 5 bonuses (HP, CMD, fort, COn or natural armor) as long as they remain enhanced by you. At 5th level, the grafter may artificially increase his graft-pool temporarily by expending his infuse automaton ability, allowing for even more flexibility in that regard.

It should also be noted that the grafter at 2nd level learns a so-called implant, essentially an invention that can only be applied to organic beings and not automata. He also learn another one every class level after that (though it should be noted, that, like regular inventions, only one of a kind can be applied to a given being, i.e. no doubling of a given implant on a creature). Some of these have level restrictions as well.

I was talking about implants. What about an adrenaline injection unit, that nets a bonus of +4 to Dex (or Str…) for one round as a swift action class levels x 2 per day times? Vastly improved carrying capacity? A nose-installed flame-thrower? (If you’re like me and grew up with Sonic, remember the final boss of Sonic & Knuckles and chuckle…) A limited use +5 insight bonus to attack? Limited times per day auto-succeed saves versus toxins and diseases, even if you have failed the save? Immunity to fear at the cost of gaining no morale bonuses? Fortification-like metal plates that help versus sneak attacks? Simply more Hp? Auto-heal via stimpack when reaching 0 hp (but not when dying immediately)?

The most powerful of grafts allow you to grant yourself (and others) dragon-like energy lines (and even cones!) as breath weapons and implant artificial brainstems that temporarily revive your minions as double HD fast zombies that retain their weapon and armor proficiencies – great if your villain just has to run…or if your fighter has no scruples about that sort of last ditch-effort to take down a villain…

Now, I know what you’re asking – how does the PrC play with all those inventions? Well, there are (as can be imagined in such a wide field) some cases, where the interaction between inventions and implants, for example, take a VERY experienced player to handle. Take Augmented (or Definite) Structure: +1 Hp per HD of the base-creature at 2 BP cost. Does that one stack with the structural augmentation implant for +5 maximum Hp at 1 BP? (Answer: Yes it does – bonus-types stacking…) What I’m trying to say here is -know the rules, tinker and this book – this is complex as hell.

It should be noted that by now, prior ambiguities as to e.g. arms/legs etc. and inventions have been cleared up and via the now established transparency between implant and invention-usage, another source of potential confusion has been streamlined away.

The revised rules also properly cover action economy for graftees of varying intelligences by being treated like an alpha using the invention, thus eliminating some of the ridiculously action-economy breaking potential builds I could construct. Great to see this smoothed and made work!

Editing and formatting are top-notch, I didn’t notice any glitches. Layout adheres to Interjection Games’ two-column b/w-standard and the pdf has no bookmarks, but needs none at this length. Artworks are thematically-fitting stock.

Okay, Bradley Crouch’s Grafter’s V.1.0 struck me as awesome, but unrefined. I wrote a review and then, life happened. For a time, I was actively out of the reviewing game as you may know and then, I get back and I find this beast. I check back…and by now it actually works. At least I couldn’t, from the top of my head, break it and reading this revised edition provided no angle for me to break this beast -and this deserves accolades. No, seriously. Fixing glitches to provide a better experience for one’s customers is great, especially when always trying to stretch the boundaries by trying insanely complex rules-stunts and classes and actually getting the job more than done deserves applause. The grafter as such took a mind-bogglingly complex base class and made it more complex while also opening its benefits up to other classes, adding some significant value to your tinker-class in game. Well worth a final verdict of 5 stars + seal of approval.

You can get this complex, cool Tinker-PrC here on OBS and here on d20pfsrd.com’s shop.