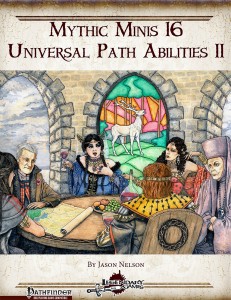 This time, we’re all about more universal path abilities after the first, awesome installment, so let’s check this out!

We begin with 4 different 1st tier abilities, with two of these netting bonus feats from Mythic Magic: Core Spells. Yeah – while I get why they’re here, let’s call them out for what they are – filler. So what about “Dramatic Reveal”. This one is all about roleplaying potential – whether a birthmark or another characteristic – something marks you for greatness and revealing it helps immensely in social skills. While mechanically none too awesome, the potential and concept BREATHES mythic for me, so yeah – as far as I’m concerned: Cool! The final 1st tier ability, “Planar Scholar” makes you a savant of planar knowledge, allowing you detect portals and decipher information about them. This ability is damn cool and carries a LOT of roleplaying potential while feeling distinct and suitable for mythic characters. Two thumbs up!

We also get 3 different 3rd tier abilities and oh boy…neat: Take one that nets you contingency (or its mythic equivalent, depending on your tier!) as a mythic power fueled ability. Yeah! What about being eternally young, including age-disguising/changing and yes, the immortal ability is also granted at higher tiers. Neat! Gaining endure elements and know direction on other planes and further expanding your planar knowledge, this one is a neat follow-up that delivers narrative potential galore: Two thumbs up as well!

The one 6th tier ability allows you to grant one mythic monster ability to your eidolon, companion etc. Solid and versatile, yes, but nothing that utterly wows me.

Jason Nelson’s second universal path-centric pdf offers quite a few cool abilities that range from awesome to filler. While the majority of path abilities herein belong on the winner side, the second column of the pdf is 1/4 empty, offering ample space for additional content and the two feat-granting abilities feel like filler to me. Generally, the overall path abilities can be considered cool, yes, but still, the last spark didn’t jump over to me. Make no mistake – this is a cool, nice pdf, but falls short of true greatness due to both the relative brevity and aforementioned points. Overall, a quintessential “good” pdf and thus well worth 4 stars.

You can get these cool abilities here on OBS and here on d20pfsrd.com’s shop.