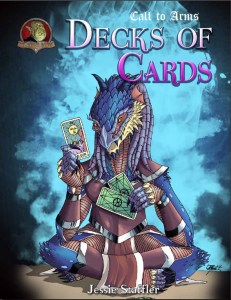 This installment of the Call to Arms-series of item-sourcebooks/compilations clocks in at 54 pages, 1 page front cover, 1 page editorial, 1 page ToC, 1 page SRD, leaving us with a massive 50 pages of content, so let’s take a look, shall we?

As has become the tradition with this series, we begin the supplement with a recap of the history of the subject matter at hand, though this time, not only the playing cards as used in real life, but also of the cards employed in the iconic deck of many things. After this brief and informative history lesson, we receive descriptions and modifications for mundane playing cards, as well as more esoteric decks – with gold values provided, of course. The discussion, much to my pleasant surprise, does also mention the Thoth tarot deck, and, to my even bigger surprise, codifies the hanafuda deck.

Okay, so now you have decks – congratulations, but how do they interact with the primarily dice-based games we play? The pdf thus proceeds to provide basic rules for skills and their interaction with the in-game act of playing cards; want to look nasty so folks let you win? The pdf does take that into account. A couple of different ways to cheat are also expounded upon before the pdf proceeds to present 4 feats: one would be the Deadly Dealer feat introduced in the Harrow Handbook. There are three feats that build on this: Double Dealer allows you to basically flurry with Deadly Dealer cards; interestingly, it also allows you to potentially activate multiple effects of playing cards fired thus. Now, it should be noted that this explicitly allows for the ignoring of the traditional limits imposed here, which makes the feat potentially a bit troubling. As an aside, it should also be noted that card-magic based classes are not necessarily assumed to work in conjunction with this. Three Card Monte builds on that for a 3rd throw (and does not capitalize a skill-reference correctly), and Mulligan lets you use Sleight of Hand to attempt to mitigate unfavorable draws…but if you do, you may never use that particular deck again! Interesting one! It should also be noted that the pdf later proceeds to mention rules for blending of magical decks for Deadly Dealer purposes.

There are three class options included in the pdf, with the deck-touched sorcerer bloodline being first. This one modifies the random outcome of items like the good ole’ rod of wonders with its bloodline arcana, and the bloodline powers similarly are inspired by cards from the deck of many things and feature temporary alignment changes via touch. The rules-integrity here is solid, if not perfect – particularly from a formatting point of view, with stuff not capitalized that should be and vice versa, and sequence of DC formulae and presentation being nonstandard. However, unless you’re nitpicky, it should be noted that the function of the options per se is not impeded. The second option within would be the card reader focused arcane school based on divination, which replaces diviner’s fortune and scrying adept with the ability to use a deck of cards as a material component substitution for material components below 100 gp value and the option to engage in a 1/day 1-hour card reading for you and up to 6 folks, providing benefits depending on the suit of cards drawn. The pdf also presents the gambling subdomain of luck, which replaces good fortune with a Bluff-based means to reroll random outcome item/spell rolls.

The pdf also presents a means to use cards as die substitution for attack rolls – handy here: the pdf does explain the math behind this approach. Interesting alternative. As an aside – in case you do not have a deck of cards ready, the pdf also mentions a dice-based substitution for drawing cards –nice!

Using the infamous deck of many things in conjunction with Deadly Dealer is btw. also discussed – and yes, it is risky. The pdf then proceeds to compile various types of magical decks, namely the deck of illusions and of silvering fate, with the section devoting most of its space to magical decks I haven’t seen before. The deck of deals is a means to generate binding agreements; the deck of imprisonment can contain targets – you get the idea. Really cool for quite a few of these, including the deck of illusions: These decks tend to come with massive tables that note e.g. a playing card or Tarot-equivalent and then the corresponding effect; the deck of curses can curse targets with becoming leering and creepy, for example. Another example would be the deck of reincarnation, which provides an interesting tweak on the whole reincarnation angle. The fate-reader’s lenses have been reprinted here, and we also receive three decks of enchanted hanafuda cards (though one is a lesser version of another). I also enjoyed the weaponized prismatic deck, the chaotic deck of useful items…and it should come as no surprise that the grand-daddy, the deck of many things…actually gets its own chapter!

Beyond handy equivalency tables to simulate the drawing experience, the chapter also provides a cursed variant and optional rules for making card-orientation matter; there is also a kind of greater version – the full deck of many things, which exceeds in its power even its more commonly known regular variant! Card to card conversion notes are presented, and much to my joy, Ultimat Campaign synergy for e.g. drawing The Ruler is provided. The harrow deck of many things is reprinted for the sake of completion, though, oddly, the table rendered the text of the table for all readers I tried it on bolded. In the fine tradition of the series, we also get an intelligent item variant of the deck, The Hustler, who has a rather important agenda – to escape the Void. As such, playing a game with this one can be rather dangerous for those involved. Finally, if even the full deck wasn’t enough…what about a frickin’ mythic variation? And you thought the regular effects were massive…

Editing per se can be considered to be very good; the rules-language is functional in the supplement. On a formatting perspective, the series has done somewhat better in the past: there are quite a few instances where sequence of presentation isn’t standard, and I noticed a couple of instances of feats and skills not properly capitalized. Layout adheres to the nice two-column full-color standard of the series, and the pdf comes with extensive, nested bookmarks for your convenience.

This is, unless I am sorely mistaken, the first pdf by Jessie Staffler I have read, and it does show a couple of beginner’s mistakes in the finer rules-formatting aspects; however, it also shows ample promise: there is a sense of unbound creativity beyond what I expected to find. The card-equivalency tables alone bespeak an honest passion, and the variant resolution mechanics included did show this willingness of the better installments of this series to go one step beyond. This feels like a passion project, and like one that consciously went much further beyond compiling existing material, instead opting to present a healthy dose of delightfully quirky high-impact deck-shenanigans. All in all, this may have a couple of rough edges, but it is a pdf that shows effort, heart, and potential. My final verdict will hence clock in at 4 stars.

You can get this fun supplement for a healthy dose of card-based chaos here on OBS!