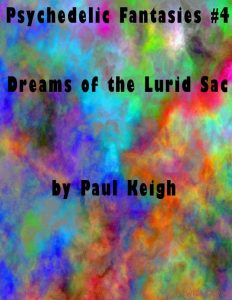 This module/setting supplement clocks in at 11 pages, one of which is devoted to the front cover, so let’s take a look!

This, like all psychedelic fantasy-modules, sports a pretty minimalist approach to module presentation – two columns of black text in a white background. Headers are bolded, but the small statblocks have no internal formatting – this is as minimalist as can be. As for the rule-set, the module does not subscribe to a particular OSR-game or edition, claiming general compatibility, which means that you will have to do some tweaking to modify the module for your preferred old-school game. 60’ (20’) are the default movement rates, HD are noted, and AC is provided in the descending convention; the monsters state a single save as a static rating, and note e.g. “diffuse – receive only half damage” or “climbs as spider”– you get the idea.

This is also a sandbox without a clearly indicated target level, but low-level to mid-level parties should have a good time here, since this module is less about murder-hoboing everything, and more about the wonder of exploration. What’s inside is less of a straight-forward dungeon.-crawl, and could be likened more to a setting supplement depicting an environment to explore. You can, of course, attempt to purge everything with fire, but that doesn’t offer the most satisfying means of using this one. It should also be noted that this dungeon is more organic than the other two psychedelic fantasies penned by the author – this has a couple of effects. For one, several creatures within have functions that it would be possible to liken to e.g. immune system, infection and the like; there also is a nascent sentience involved, and the actions of the players and how they ultimately will interact with the dungeon is a driving factor. And yes, the dungeon may be slain.

As before, we have a map on the final page, which this time around looks very much like a massive array of bubbles – the structure of the sac is itself a bit less interesting than the one of the plaque in “Gleams of the Livid Plaque”, but does its unique own atmosphere surprisingly well. While attempting to go full-blown combat on everything can be deadly, the adventure is per se fair – save or die effects are thankfully rare, but careless PCs may find themselves transcend their bodies, lose limbs and the like – this is, after all, an old-school adventure.

Like the other two psychedelic fantasies penned by the author, we have 3 new spells that should help exploring the place. These, once more, are not presented in a proper manner, lacking spell levels, suggested classes etc. – but there is one significant component that makes this matter less. The PCs don’t really need the spells to properly navigate this complex, so you can just ignore them and run this without much hassle in your favorite rule-set.

While the lack of adherence to a specific OSR rules-set means that there won’t be too intricate abilities regarding the new creatures and how they behave, this module does one thing better regarding the strange creatures employed than its two brethren: Due to the structure and theme of the adventure, and due to the names used and analogues to some organic structures we’re familiar with, it was much easier for me to keep the different creatures apart. It’s a subtle thing, but it’s one that made this a bit easier to run.  This is also emphasized by the presence of advice on running the place. Also convenient for the referees – the sac comes with a d6-table to determine sac patterns, and a d10 table to determine sac color.

There isn’t much of a plot per se to be spoiled here. This is a classic sandbox, very much all about adding players to the mix and letting them explore the strangeness, but since said strangeness is part of the fun, consider this to be a SPOILER-warning for potential players; only referees should continue reading.

All right, so, like in the other two psychedelic fantasies penned by the author, we have a number of species  that can be grouped in various factions, but this time around, I found it easier to keep them apart – this is partially due to slightly stronger leitmotifs – three species act as Symbiotes of sorts; two species are parasites, and then there would be the invasive species – refugees from a dying world, whose only contact with the PC’s world so far has been the eponymous sac. These include tube-like creatures that tie to the nearest incision, a planar rift of sorts, and the commanders, dubbed “surgeons” are actually engaged in their own petty struggles as well as the overall notion of an exodus. The supplement also mentions 2 hybrids that tweak other creatures, and there would be the manifestations – you see, the lurid sac does have a kind of will that is constantly changing and evolving: The aurmind. And thus, there are 3 so-called Manifestations, embodiments/sentient phenomena. The factions have pretty strong leitmotifs here, which, while a small thing in and of itself, really enhanced the experience of running this.

The living nature of the sac is ever-present – from the ellipsoid chambers to the way in which a small engine allows you to tweak means of furling/unfurling openings, this adventure never lets you forget that you’re exploring something truly strange. Rooms may well be slain (Hit Points etc. provided), scar over, and a whole table is devoted to the strange and magical humors that suffuse this complex. These may yield comprehension of activities, be acidic, flammable – or, if the “aurmind” wasn’t clue enough…gold.

You see, the sac is actually growing from a root that proceeds ore; gold to be more precise. The lurid sac’s sentient and expansion is fueled by gold, which makes for a genuinely unique angle – the sac needs to find more gold, and traversing the wrong room may feed gold to the entity…and the sac rewards those that feed its expansion, though in an alien manner indeed. This organic, nigh-incomprehensible entity is contrasted with the invasive surgeon’s potential magitech/science-fantasy-angles. The sac has a lifespan, specialized chambers that serve as odd organs, and notes how the sac responds to damage, to rooms being destroyed, etc. – 12 such unique places/organs inside the sac are provided, and yes, there is a means to spread the sac or even seed new sacs with a unique “treasure” seed. The appendices also include a variant of one monster, and 10 sample events add further to the immediate usefulness of the complex. As in the other psychedelic fantasies penned by the author, we get a massive selection of 6 d10 tables – from invasive components to sac debris to odd beings, these once more add to the strong themes here.

Paul Keigh’s “Dreams of the Lucid Sac” is the best-structured of his three psychedelic fantasies – the sac didn’t require much pondering to get an idea of how its alien vistas work; the stronger leitmotifs for the factions help setting them apart, and the notion of the dungeon itself being literally alive in a thoroughly alien manner. It is slightly less unique than the scenario presented in the “Gleams of the Livid Plaque”, but it is much easier to pull off, and feels stronger regarding how it uses its materials. It can be easily inserted into your games, and it may actually spawn consequences far beyond the confines of its location. All in all, this is perhaps the best of these three from a structural point of view.

While, as a person, I prefer the stark and uncaring hostility of the potentially cataclysmic “Gleams of the Livid Plaque”, this one is easily the module that is easier and smoother to run and implement. My final verdict will clock in at 4.5 stars, rounded down. While the spells still aren’t good, they may be ignored, and as a whole, I consider this to be very much worth getting. As before, you shouldn’t run this and the other psychedelic fantasies by Paul Keigh in the same campaign due to structural overlap, though it is less pronounced here than when in comparison between the other two; if you want my recommendation for running two of them, I’d suggest running this one and the plaque-adventure in the same campaign, as they have pretty different themes. This is a good example of a supplement that is all substance, and if you don’t mind the absence of artwork or beautiful layout, do as I do, and round up – and check out an adventure locale unlike any you’ve ever subjected your PCs to.

You can get this strange, truly psychedelic location/module here on OBS!