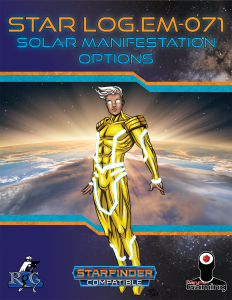 As often the case in the series, we begin with a bit of context for the material within, revealing some lore regarding the ever more compelling Xa-Osoro system.

After this, we are introduced to the 4 solar manifestations introduced herein, which may be taken instead of solar armor or solar weapon. We start with solar avatar, which lets you design 4 polymorph forms, as described by the polymorph (not italicized properly once, though thereafter, the pdf gets it right) spell – these are your avatar forms, acting as the 1st-level iteration of the spell, but you remain recognizable, and all attacks are treated as one-handed advanced melee weapon attacks you’re proficient with, with attack bonus equal to BAB + Charisma modifier + other bonuses that would apply to advanced melee weapon attacks. Transformation into such a form is a full action and remains indefinite, or until you assume another avatar form. At 4th level and every 3 levels thereafter, the avatar, the polymorph improves as though 1 spell level higher, capping at 6th spell level at 16th class level. Starting at 7th level, changing from one avatar form to another is a standard action, while reverting to the default form is a move action. If you apply a solarian weapon crystal to the stellar mote, it bestows its benefits to the natural attacks of any avatar form assumed. You may redesign one avatar form whenever you gain a solarian level. The interaction with the spell-level increase could have used explicit spelling out – though there are no issues, this might cause minor confusion at first.

Solar body lets you infuse the solar mote directly into your body; this may or may not change physical appearance slightly, and design may be changed upon attaining a new solarian level. This nets you Improved Unarmed Strike, and while infused with the mote, your unarmed strikes are one-handed kinetic advanced weapons for the purpose of Weapon Specialization and similar options. You get class level to Strength to determine your bulk-limits and may fire laser vision from your eyes, range 120 ft. This is a fire damage-causing attack with a proper burn-inducing critical, and behaves as a longarm. I am pretty sure the text erroneously refers to laser vision as solar weapon once, but that as a nitpicky aside. The damage and burn scale, and uses are contingent on Charisma modifier, with Stamina regain-rest to reset. Forming or dismissing solar body form is a swift action that may be performed as a reaction, and solar weapon crystals may be used to enhance the attacks. Minor nitpick: Solar mote is called “stellar” here.

Solar guardian is cool, as it nets you a pet – one roughly based on a mechanic’s drone with a wholly unique chassis presented within. Summoning grafts are applied, and forming or dismissing the guardian is a full action, and you can “repair” your guardian 1/day, and also while taking a rest – as a conscious exception to the “no task performed while resting”-rule. Cool!

The final one would be the solar reverie, whose design you once more may change if you gain a level. This one nets you a reverie pool equal to ½ class level + Charisma modifier, and this ability lets you use these points of cosmic energy (CE) to cast mystic spells, with the DC equal to 10 + spell’s level + Charisma modifier, and a required 10 + Charisma modifier to learn a spell. CE is replenished as a daily-use ability, and you begin play with two 0-level spells, and one of 1st level. You gain more spells to cast via CE at higher levels, with new spell levels unlocking, and cost of spells equal to the spell’s level. On a gained solarian level, you can retrain a single spell, and variable-level spells are unlocked for all spell levels you have access to, providing you know the spell level and have sufficient CE. You can also identify encoded spell gems and decipher magical inscriptions – solar reverie need not be activated – it’s always on.

At 2nd level, you may increase the damage repaired to the guardian, and at 8th level, the mod array available to the guardian is enhanced. Characters choosing solar reverie may spend Resolve up to Charisma modifier to add as much to the reverie pool, replenishing expended CE, though this is fatiguing and thus, limited. Balance-wise, as an 8th-level revelation, this checks out.

Conclusion:
Editing and formatting are very good on a rules language level; on a formal level, a few minor snafus are here, but none impede the mechanical integrity of the material within. Layout adheres to the series’ two-column full-color standard, with a nice artwork, and the pdf has no bookmarks, but needs none at this length.

Alexander Augunas’ solarian options here are pretty darn cool, though I couldn’t help but feel that inclusion of how they behave in context of the graft-system would have elevated them further; as provided, GMs will need to improvise a bit, which is the deciding factor for me rounding down from my final verdict of 4.5 stars. Fans of solarians should definitely get this!

You can get this cool little expansion here on OBS!

This is part of the Starfinder megabundle, which you can find here!

If you enjoy my reviews, please contemplate leaving a donation or joining my patreon.