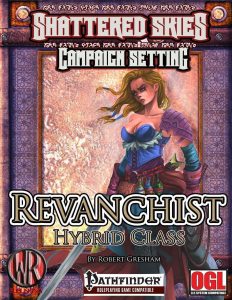 This hybrid class clocks in at 8 pages, 1 page front cover, 1 page editorial, 1 page back cover, 0.5 pages SRD, leaving us with 4.5 pages of content, so let’s take a look!

The revanchist base class must be non-evil and get d8 HD, 6 + Int skills per level, proficiency with simple weapons plus hand crossbow, longbow, repeating crossbow, shortbow and whip as well as light & medium armor and shields, excluding tower shields. Chassis-wise, we’re looking at 3/4 BAB-progression as well as good Fort- and Will-saves.

The revanchist gains Step-up as a bonus feat at first level, but the defining class feature at this level would be oath of vengeance, usable 1/day as a swift action, with 4th level and every 3 levels thereafter yielding an additional daily use. The oath nets the revanchist a bonus to damage against the target equal to the character’s level (should be class level) and you treat the weapon as magic for the purpose of overcoming DR as well as +1 to saves versus “effects and conditions” created by the foe. This increases by +1 at 6th, 10th and 15th level. Starting at 6th level, the revanchist’s weapons are treated as lawful and good for the purpose of overcoming DR (which can be weird, since revanchists can be chaotic). Nice catch – 10th level makes the weapon count as adamantine for the purpose of overcoming DR, but not hardness interaction. 15th level yields resistance to one of the base energy types or sonic damage, though the wording is wonky: “Becomes resistant (10) to one type of energy…” is uncommon. This resistances may be chosen anew whenever you swear a new oath of vengeance – I’m not sure if this resistance is supposed to only work for effects etc. by the oath’s target, since the ability only has a base duration until the end of the encounter

2nd level yields Improved Initiative and 3rd level yields “Sense Murderer” – which fails to italicize discern lies and faerie fire…and is utterly broken: “Whenever a revanchist is within 30 feet of such a criminal, the target is affected by a form of faerie fire, only visible to the revanchist.”[sic!] That’s not how faerie fire works and basing the ability on “murderer” a) wrecks pretty much every investigation and b) is incredibly opaque – every adventurer, every watchman, soldier, etc. potentially could qualify as a murderer. Non-operational as written. Also at 3rd level, the class gets immunity to fear and grants a bonus of +4 to saves versus fear to allies within 10 feet. This is basically aura of courage, with a needless name-change.

Roar of revenge is gained at 5th level – once per 1d4 rounds, as a standard action, the revanchist can emit a shriek. All creatures (including allies) within 60 feet must succeed a Will-save versus 10 + 1/2 class level + Cha-mod or cower (!!!) for 1d4 rounds. This is utterly OP for the level, should be a fear effect and needs to be moved to higher levels. Cowering is one of the most powerful conditions, it’s per definition a fear effect and should be prevented by immunities and even though allies are affected, this is a horrible cheese-able ability.

The table contradicts the rules-text – ghost mount, per table, is gained at 4th level, while the rules text situates it at 5th level. Which is it? This companion acts as a full-strength spiritualist’s phantom companion. The spiritualist’s etheric tether is gained and applied to the mount, which can must be an animal capable of bearing the revanchist’s weight and the mount is manifested in ectoplasmic form. The mount also gains some modifications of the base phantom engine. 5th level yields DR 1/-, which increases by +1/- every 5 levels thereafter. Starting at 6th level, the mount ignores difficult terrain and 9th level yields water walk (bingo, not italicized) at will.

7th level yields an alternate oath – oath of hatred. Or at least, that’s how the ability is phrased. In fact, it has no daily limit that sets it apart from oath of vengeance, should thus be a sub-ability of it, and nets the benefits of haste (CL 20th – WTF??? At least that one is italicized for once…) and an unytped +4 to atk and grapple-checks. So, does that mean net +8 to grappling? No idea. Needlessly confused. This oath consumes 2 uses of the oath, which means that it won’t be used often

9th level yields SR 5, +5 for every 5 levels thereafter, which is not how SR usually scales. 11th level yields air walk at will for the mount “(as the spell, no action required)[sic!]” for “1 round at a time” – This ability, which should be utterly simple…is not, at least not how it’s presented here. 11th yields stalwart.

Starting at 13th level, the revanchist may expend 3 uses of her oath to get +4 to Strength and Constitution (bonus type not stated), +2 to natural AC (again, not stated) and +10 base speed as well as DR 10 /evil. Dumb: “As a standard action, the revanchist can deal 10 negative energy damage to a target per class level (capping at 150 damage), 1/2 on a save. Which one? No idea. Range? No idea. How often can it be used? No clue. Can it only affect the oath’s target? No idea. Broken as hell, even though it can’t reduce a target to below 1 hit point. 14th level yields exploit weakness.

At 16th level, revanchists return from the dead as a revenant when killed by a non-outsider, non-dragon. 17th level yields an AoO whenever a foe hits the revanchist or an adjacent ally, an attack that gains a +2 bonus to atk, +5 if the prompting attack was critical. 18th level yields a bonus combat feat and, as a capstone, the revanchist can perform save or die when invoking oath of judgment – once again, this ability fails to specify its target – RAW, you can use it versus creatures other than the oath’s target. This is due to the ability being a copy of true judgment, but judgment provides general benefits, whereas the oaths are targeted effects, making this weird, in spite of being a straight copy. As an aside, the save here is strangely governed by Wisdom – which is completely different from the governing attribute of all other class abilities.

Editing and formatting are not good. There are a lot of missed italicizations and similarly, several non-standard wordings in the rules-language. Layout adheres to a 2-column full-color standard and the character artwork is pretty cool. The pdf has no bookmarks. Cut-copy-paste is disabled, which constitutes a serious comfort detriment when using the class.

Robert Gresham’s revanchist per se is definitely a class with promise – the idea of a ghost mount-riding agent of righteous revenge is cool. Alas, both in balance and precision, the class leaves much to be desired. The base chassis is superior to that of the cavalier and inquisitor, the mount is VERY strong and a bit opaque and there are a lot of hiccups. O a design-perspective, the class offers no choice, no player agenda – one revanchist will be just like all others, with only feats and races making a difference. In short – this class has some broken abilities, issues in the craftsmanship, no player agenda and is too strong. The concept is cool, but that’s all the positive I can say about this class, unfortunately. This may be worth revisiting and rebuilding from scratch, but as written, I can’t rate this higher than 1.5 stars, rounded up due to in dubio pro reo.