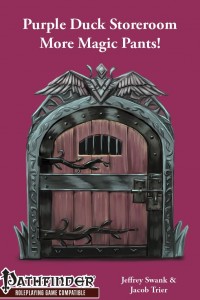 This installment of Purple Duck games’ short, inexpensive experimental pdfs clocks in at 15 pages, 1 page front cover, 1 page SRD, leaving us with 13 pages of content, so let’s take a look!

In case you missed my review on the first magic pants supplement: Yes, these pdfs invent a leg-slot. Yes, they are cognizant of this. Yes, the authors probably have collected the 3 unique leggings in the Baldur’s Gate saga….and yes, I consider the idea well worth it. So here are more pants!

The first of the pants is the bell-bottoms allows the wielder to perform secondary kick attacks that have the thundering quality and 1/day duplicate shout…though unfortunately, I have no idea as what action – standard or free?

Awesome: The Black Widow’s Garter – it contains an extradimensional space where you can put poisoned weapons, which then have their potency enhanced. And yes, the item gets it right -you can’t just store a crapton of poisoned weapons inside. AC-enhancing boxer shorts that can 1/day convert lethal damage to nonlethal damage also are pretty awesome, while kaber kilts help throwing oversized weapons.

Hot pants protect versus the cold…and can be activated to engulf the wearer in a flaming aura – and yes, the activation action is properly codified. And it’s hilarious. Leggings of coiling plants can create massive undergrowth and the loincloth of the jungle helps with Tarzan-like stunts – though activation of the spell included here is not perfectly clear – I assume the default standard action of use activation/spell-trigger and spell, but still…would have been nice.

More interesting – what about leggings that 1/day allow your legs o elongate to 20 feet? The benefits regarding obstacles, terrain etc. are concisely covered, the imagery is awesome and the usefulness undisputed. Damn cool! In an homage to Rogue genius Games, I assume, bright red pantaloons allow for a temporary increase of mental faculties – somewhat akin to a mental attribute-based version of a barbarian’s rage – nice. Also rather cool – the focus on the mental similarly mirrors the effect in an inability to engage in physically stressful situations while in the throes of the pants. Unlike a rage, though, the wearer is left energized by the pants – pretty cool overall design.

The Pants of the Hammer Master allow the wielder to command foes to stop..and be bashed with a hammer. Yep. Hammer Time. XD Rage-enhancing purple pants of fury, rebellious longstockings that allow you to ignore confinement like Pippilotta Viktualia Rullgardina Krumsnyta Efraimsdotter Långstrump and yes, if the wearer has a horse or monkey as animal companions/mounts, they can learn more tricks. Roadrunner pants allow you to air walk and move faster while running. Smelly pants allow the wielder to be…well…smelly and unleash stinking clouds.

With Perform (Dance) and sparkle pants, you may AoE dazzle foes (hey, that rhymed!), not all pants are benevolent – there are a bunch of cursed ones inside as well – for example swimming pants that attract aquatic predators, pants that make you bossy or crabby and britches that make you sassy…and particularly loathed by vendors…oh, and what about fear-the-dark scaredy pants? Yeah, nice!

Conclusion:
Editing and formatting are top-notch this time around – I noticed no significant formal glitches. Rules-language-wise, there are some minor instances where activation actions of spells-in-a-can could have been clearer. The pdf’s layout adheres to Purple Duck games’ no-frills 1-column standard for the series and the pdf has no artworks, but comes fully bookmarked for your convenience.

Jeffrey Swank and Jacob Trier’s array of magical pants made me laugh very hard – but rest assured that this is anything but a joke product – in fact, there are several benefits and mechanical operations in the crunch here that can be considered to be rather complex. While not always perfect, I still can’t bring myself to rate this down – for the low asking price, you do get a rather cool array of magical pants – well worth a final verdict of 4.5 stars…and since the crunch itself sports some unique ideas and particular mechanical executions, I’ll round up for the purpose of this platform.

You can get these cool, inexpensive magical pants here on OBS and here on d20pfsrd.com’s shop!
Endzeitgeist out.