Once Upon an Encounter: Red Riding Hood

Once Upon an Encounter: Red Riding Hood 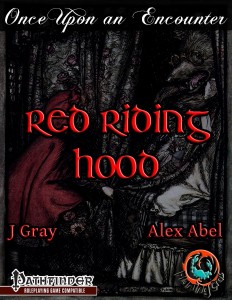 This pdf clocks in at 6 pages, 1 page front cover, 1 page editorial, 2 pages of SRD, leaving us with 2 pages of content, so let’s take a look!

I’ve you’ve been following my reviews, you may have noticed that I am quite versed with the folklore penned by the Brothers Grimm – not coincidentally. Beyond being a German, I grew up with *slightly* censured original tales, only to have the uncensored ones appeal even more to me when I became old enough to cope with the rather grisly details. Suffice to say, I never was a big fan of most Disney adaptations…

What series would hence be better suited as the first product I’ve reviewed by Flaming Crab Games?

So, what do we receive? Well, we obviously receive an encounter – but its set-up goes slightly beyond what one would expect: 3 different set-ups for the encounter are provided: From a cunning trap engineered by the wolf to stumbling upon the wolf’s doing, the set-ups can be considered well-crafted and diverse/detailed enough, as far as hooks go.

Speaking of which – the solid statblock for the Big Bad Wolf, here envisioned as a CR 6 unique outsider (including, thankfully, swallow whole et al.) and the one provided for Red Riding Hood can be considered surprisingly fresh – the latter has been reimagined as a paladin…alas, as a conflicted one, for the lady suffers from the taint of the wolf, which makes her temper volatile and might cost her paladinhood, should she not manage to slay the dread beast. As such, the characters offer a dynamic I did not expect from the encounter set-up, so kudos for that!

Red’s riding hood has been introduced as a shoulder-slot occupying item that helps the wearer to discern falsehoods and see through illusions, while also providing 1/day true seeing. Beyond that, there are two boxes with scaling DCs that should net some information for PCs actually doing proper legwork when tackling the challenge herein – a box for Red and the Wolf detail that.

So, let’s get this out of the way – set-up-wise, this is a damn cool encounter and the builds for both Red and Wolf are nice. Alas, one can also perceive the distinct note of this being a first installment in the series in the finer details and the rough edges one can find with a fine-tooth comb. One example would be, alas, found in one of the cooler options herein – namely skinning the Big Bad Wolf to wear his pelt: While the survival DC to skin him is provided, the effect being specified as like that of a hat of disguise, the piece lacks the CL of the alter self effect. While just taking the default stats of the hat certainly is possible, it does detract from the coolness of the pelt. A higher CL and proper information on what slot the pelt occupies would certainly have been appreciated. The stomach can be salvaged as a bag of holding type II, but again no CL of unique effect is provided. I also like how the teeth can be used as power components, but they can also be used to cast transmutation spells at +1 CL – which is cool, but do they act as a focus or material component when used in conjunction with spells? I *love* the “unique monster-bit-scavenging” – in fact, I require the like for crafting in my homegame. However, at the same time, I would have loved this set-up to go slightly further and provide more unique benefits. On the nitpicky part, one survival check for skinning, stomach and teeth feels a bit much – separate DCs for the items would have made more sense to me, but that is me being nitpicky.

A second rough edge, imho, would be Red’s cool, volatile temper – “Any time Red Hood perceives another’s words as insulting to herself, her honor or her goddess, she must make a DC 10 Will save or attack the speaker.” While the pdf tells the DM to potentially raise/lower the DC, Red has a will-save of +8, meaning that chances are pretty slim for her to fail the save – depending on the DM’s interpretation of “insulting to honor or goddess” she arguably might never blow up. Since the encounter already mentions that the taint’s influence grows, why not add a timer and have the DC rise per day, with outbursts resetting the timer? In my book, that would have made the threat more dynamic and organic and provide DMs with a better base than their own fiat/bad luck.

Finally, there is one detracting component I need to mention – if you are looking for an interesting terrain set-up, some options to use weather, thickets etc. to render the encounter more complex, you won’t find those here.

Editing and formatting are very good, there is not much to complain about in this department. Layout adheres to a relatively printer-friendly two-column standard with thematically-fitting stock-art. The pdf has no bookmarks, but needs none at this length.

Alex Abel and J. Gray deliver an encounter that turned out to be more inspired than I would have imagined. In fact, both the builds and the micro-story embedded in this encounter work quite well. Indeed, I love the monster-scavenging, the troubled paladin-take on Red etc. – this is a pretty nice offering indeed. Alas, it also suffers from some minor rough edges and falls short of its own potential – with some terrain modifications, slightly more defined and unique scavenging etc., this could have reached the highest echelons. As written, we receive a solid encounter with nice statblocks for just a buck. My final verdict, hence, will clock in at 3.5 stars, rounded up due to the low price and due to being the first in the series. I’m looking forward to see how the product-line matures!

You can get this interesting encounter for just a buck here on OBS and here on d20pfsrd.com’s shop!