Vault of the Faceless Giants (OSR)

Vault of the Faceless Giants (OSR) 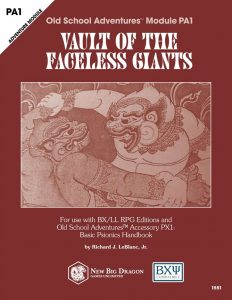 Okay, first of all: This adventure assumes that you’re using the Basic Psionics Handbook, the impressive psionics-rules provided for B/X. While it is possible to run this without access to said rules, the module does lose some of its unique flavor and requires some serious GM-work to adapt, so I strongly suggest getting the Basic Psionics Handbook, also due to flavor reasons.

Why? This module assumes a jungle/quasi-Indian/Hindu-style background, with the chakras that govern the Basic Psionics Handbook’s interpretation of psionics a serious part of the appeal of the adventure. The module sports e.g. visual representations of the chakra symbols as one handout, and a basic explanation of components of lingam symbolism as featured herein as the second handout. If that wasn’t clue enough, let me spell out that this module tends to fall on the “realistic” side of things – the dungeon to be explored makes internal sense; the adversaries react in ways that are reasonable, and if you gravitate to the lower end of the fantasy spectrum, this won’t disappoint – while magic (and psionics) are very much present and provide a sense of the magical, it is one very grounded in a sort of quasi-reality – something I definitely enjoyed.

The module comes with 3 new monsters, 5 statted non-unique NPC types, and 9 pregenerated characters that list sex, class, ability scores, alignment, hit points, AC, equipment, and, if relevant, spells/disciplines. The module strongly suggests a well-rounded party, which, in this case, means that a mystic, a magic-user, and a cleric are highly recommended. Having a monk or fighter and a thief, as always, is prudent as well. For level-range, the module suggests being primarily intended for 1st level characters. Personally, I’d rather suggest it for 2nd to 3rd level, unless your players are experienced veterans of dungeon-crawling. This module can be pretty tricky, but, like in most good modules, the difficulty is highly contingent on how well the PLAYERS play, not necessarily on how optimized characters are. This module can be very much doable for 1st level characters, but groups that want to murderhobo everything may well find themselves overpowered fast.

That being said, I’d consider this to be a moderately-difficult adventure, slightly on the difficult side, and for the most part, its difficulty is fair. While there is a save-or-die cobra, I can live with that. Similarly, I’m totally fine with a save or die poison needle trap in a chest. Unfortunately, the adventure does feature one instance that is pretty dickish. I’ll get to that in the SPOILER-section below.

From aesthetics to the boxed read-aloud text to the b/w-artworks, this encapsulates well the spirit of early 80s TSR-modules, though it does, alas, also feature their grating lack of player-friendly maps for the dungeon.

All right, and this is about as far as I can go without diving into SPOILERS. Potential players should jump ahead to the conclusion.

All right, only GMs around? Great! So, the PCs are on board of a ship, going upstream into the jungle – a couple of hooks are provided, but ultimately, it’s a means to get your Heart of Darkness/Apocalypse Now Redux vibe going on for setting the stage, particularly since the vessel sinks in the introductory paragraph, which sees the PCs venture to the tiny fishing village of Phroumi Sramol (player-friendly map included) – the greeting they receive is contingent on a reaction roll, with 5 fleshed out different scenarios presented. During the feast, there is a woman who makes a scene – her child is missing, and she claims that a temple set into a cliff’s side, once a center of worship for vile Rahb, was the source of beings who snatched her baby. The evil cult, ostensibly once vanquished by the legendary hero Somnang, may have returned – though the chief and villagers deny the like, one of the chief’s sons asks the PCs to intervene.

If the PCs do their legwork, they may become privy to the 20 rumors going around, and there are 12 persons that may be willing to accomplish them on their expedition – all have names, ages, HP and special properties noted. Wandering monsters and weather in the jungle are both covered, and hey, the repair of the boat will take some time, so why not do some proper adventuring, right? Groups that know to gather information first will also easily be pointed towards a local mystic – the old man mystic, who will have a gift for the PCs – a pearl of planar mending, though the PCs will probably have no means of detecting the like. He can also act as a support for the PCs and mop up after them if they were shoddy in their exploration, but that just as an aside. This fellow can also act as a transition to further adventures – while there were at least two additional adventures planned in the series, they haven’t materialized yet as per the writing of this review, which is a bit frustrating. That being said, apart from the tantalizing hints left for the GM, the module is very much self-contained for the players.

Anyhow, set inside the cliff-face are 7 faceless, massive statues, all exuding an ironic mockery sense of peace – the eponymous faceless giants. There is more than one means of entering the dungeon beyond, and the complex has different wandering monster tables for illuminated and darkened areas. You see, the complex contains two planar breaches – one just dumping those that enter in the extended vicinity as a kinda random teleporter; the second, though, leads directly to the Abyss and Rahb’s dread lands. The map color-codes these areas in an easy to use manner. Very cool: mystics can use special glyphs for secret passages and will have a lot to do. You see, the dread cult of Rahb indeed awaits in the complex – though the small army is mainly kept in (meditative) stasis to keep them from consuming too much resources. And this is where player smarts come in – the cult isn’t stupid, and has means of alerting the complex, and if the PCs have to face the bundled might of the Votaries of Rahb, they will most assuredly perish – so smarts and clever adventuring are what can save the day. Considering how the module makes sense, how its cultural tropes are so different from standard euro-centric modules, this focus works exceedingly well. Save in one instance. There is one room that houses a psionically active yellow mold. You open the door…BAM, save or die. Granted, it’s a secret door. Granted, it *is* telegraphed in the read-aloud text – but AoE save or die PLUS psionic attack? That is pretty nasty.

Anyhow, the task here is for the players to close the correct planar breach and defeat the Rahb cultists, obviously.

The module doesn’t end there, as there is a second mini-adventure added – originally intended as a transition to the second adventure in the series,  it depicts the Kar Slab shrine, a second and pretty trap-heavy dungeon – though one where correctly using a certain item can eliminate the undead stick-skeletons and similar threats found.

Editing and formatting are very good on a formal and rules-language level. Layout adheres to the classic no-frills two-column b/w-standard, with nice pieces of b/w-artworks and handouts provided. The cartography is precise and surprisingly plentiful, though the lack of a player-friendly, spoilerless version for the dungeons is a bit of a bummer. Speaking of which: The pdf lacks bookmarks, which sucks. I can’t comment on the print version yet.

Richard J. LeBlanc, Jr.’s psionic adventure here is pretty damn good – it’s vastly superior in comparison to not only his Egyptian-style free module, it also offers more content, a more interesting setting, and the use of psionics is another plus. Now, usually, this module would score a final verdict in the 4-star-range; however, there is one more thing to consider: This is FREE. Not even PWYW, but FREE. This is a price that is very hard to beat, and considering the overall quality, an impressive offering. After all, I could, at the top of my head, recite a VERY long list of modules that are not as fun and well-crafted as this one. This generosity is what makes me round up from my final verdict of 4.5 stars – this is most assuredly worth downloading, and personally, I am hopeful that we might one day see the two planned sequels teased in this adventure.

You can get this adventure here for FREE as a pdf!

Want print? You can find it here on lulu!

Missed the Basic Psionics Handbook? You can find it here as a pdf, and here in print!

Enjoying my reviews? Please consider leaving a donation or joining my patreon. Thank you.