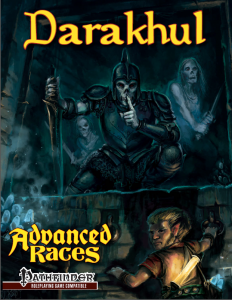 The second in Kobold Press’ series of racial pdfs is 19 pages long, 1 page front cover, 1 page editorial/ToC, 1 page advertisement, 1 page SRD, leaving us with 15 pages of content, so let’s take a look, shall we?

So what are Darakhul? well, they are a race that has haunted my twisted imagination ever since I had the good fortune of being able to read the closed Open Design “Empire of Ghouls” – essentially, Darakhul are intelligent ghouls that inhabit a subterranean, militaristic empire that constantly requires fuel in the form of flesh. Taking the idea of social predators up to 11, their empire can essentially be envisioned as a kind of blend of twisted theology, Roman discipline and undying hunger. Add a well-greased war machinery, complex social structures and we have an empire of foes that is frightening on more than one level.

And now, you can play these nasties. Darakhul get +2 Cha, no con-score (using like undead instead cha) are either medium or small (with small benefits balanced out by a reduced movement rate of 20 ft. versus the 30 ft. of medium Darakhul), darkvision 60 ft., burrow speed 10 ft., a bite attack 8which unfortunately does not specify whether it acts as a secondary natural attack or a primary one), darkvision 60 ft. and count as undead. Undead PCs are a nightmare to balance and usually, my knee-jerk reflex would be to start complaining right now…but being permanently annihilated at 0 HP, -4 to ability and skill-checks in day light (-2 in the spell’s area) sans save and lethal starvation when not consuming sufficient amounts of meat actually do a good job of making the race more fragile and balanced…so yeah, no gripes.

After this basic crunch, we are introduced to the Darakhul and how they interact with the world, advice on how to avoid the Drizz’t-syndrome (or at least make it cool) and cover the problem of proper disguises – for Darakhul on the surface (or anywhere, really), may easily end up rather dead by lynchmob when not developing a proper strategy to conceal their nature. Worse, since positive energy harms them, Darakhul may suffer rather unpleasant side-effects from even well-meaning clerics.

A total of 12 different traits for Darakhul are provided to further customize your character: From having grown up in the empire’s capital to being able to select traits from the former race prior to ghoulification up to the option to choose lantern beetles (with full stats) as companions/familiars or determine a certain stock from which you were initiated into Darakhul ranks, the traits are balanced and neat.

We also get a selection of 14 new feats that allow for the expansion of darkvision, healing by corpse-consumption, improved tracking of wounded creatures, gaining claw attacks, increase burrow speed and gain DR 5/magic, which upgrades to DR 10/magic – powerful, yes, but since the Darakhul is particularly vulnerable and fragile at low levels, a life-saver to prevent your PC from reaching that nasty 0…Partially adapting to sunlight, cha-mod/day using paralytic saliva (for 1 round +1 per point of cha-mod) and via two feats, one of which is rather high-level, Darakhul can even end their hunger. The problem of rage not working as intended for undead can also be countered via the undead rage-feat, which instead adds the bonus to cha and finally, there is a feat that allows you to consume hearts to power your metamagic – the latter, suffice to say, is a rather evil option.

There also are 3 archetypes herein – the Quicksilver Alchemist who uses mutagens to enhance cha at the cost of wis (and said damage can only be healed by massive meat-consumption) and also learns to create undead and use the inflict-spells, but pays for this in weaker bombs. At 10th level, the archetype may choose the new “Death which dreams”-discovery, which nets him/her 10 negative hp before destruction and a buffer of 5 cha-points of attribute damage before true death – essentially making the character more like a mortal and less fragile in that regard. then again, at 10th level, these scarce few hp are not that much. the Imperial Hunter is perhaps the best slaver/catch ’em alive (and perhaps eat them)-archetype I’ve seen so far – iconic and cool and nothing to complain about! Finally, we get a focused wizard’s school with the Necrophage school. Associated with (surprise) necromancy, these wizards may bolster their power via flesh, gain undead familiars and consume the flesh to gain the benefits of speak with the dead, even if the target is still alive.

Of course, we also get new magic items – 8, to be precise – from books netting bonuses on checks regarding the ghouls, a new type of bone armor (and magic version of it), helms that net you razor maw, ghoul saliva-paste-poison, paralytic poison-net-stones and ghoulish travel rations as well as morningstars optimized for tunnel fighting and close combat/grappling at the expense of working worse when attacking mounted or from higher ground. Beyond these, we also get 5 new spells – cannibalizing lesser undead, inciting forced confessions from targets, improve your flesh with DR that is negated by exposure to daylight or gain deadly, increased bite attacks. Oh, and there is a cantrip that allows you to conjure forth maggots to clean the flesh from bones of the truly deceased. Beyond that, we also get a new incantation – “Call the Reaper’s Pack”. Superbly fluffy, this cool ritual allows you to call forth one or more lich hounds, which btw. constitute the new CR 5 undead hunting dog: With frightening howls and deadly capabilities to finish off prone creatures with massive damage as swift actions, these undead hounds will drive the fear of the pack into your players!

Editing and formatting are top-notch, I didn’t notice any significant glitches. layout adheres to Kobold press’ 2-column full-color standard and the pdf comes fully bookmarked for your convenience and also with several neat pieces of beautiful artwork.

Ben McFarland actually manages to deliver a take on the undead PC-race that is both flavorful and powerful without breaking the game. Playing an undead is a challenge and not for the faint of heart, but with this supplement, I wager it can be a fun endeavor for all involved. Even with very minor ambiguities here and there, the intent of the rules is always clear, though the absence of age, height and weight-tables is a bit unpleasant – I realize that height can be taken from the parent race and age is practically immortal, but weight would be interesting… This second installment of the advanced races-series is fun to read, oozes flair and makes this a thoroughly nice offering at a more than fair price-point. Any supplement that actually can make me contemplate allowing an undead PC in a game is well-crafted indeed-  especially since I expected to at least dislike or be ambivalent about this pdf. Great quality in crunch and fluff, compelling writing, neat production values – well worth a final verdict of 5 stars!