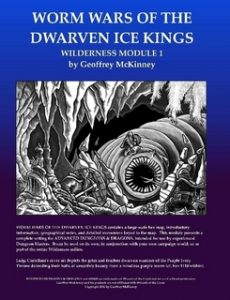 The back cover of the module is a rather nice hex-map that is a step up from the Carcosa-maps. Why? Well, while the white numbers and hex-borders are still here, they now have a shadow added, which makes them easy to decipher, even against a backdrop of a yellow desert. A downside of the hex-map, nice though it is, would be that points of interest like settlements, monuments, etc. have all been noted – including e.g. the fane of the main evil guys, which makes the map not too useful as a player map, unless you just declare all of that common knowledge.

The module begins with a brief summary of the geographic features…which sport an odd and imho annoying peculiarity: While plenty of places have normal, proper names, you can e.g. read “G__t River” or “G__y Mountains” or “G____d, Mount” here – the referee is expected to fill these in. I really dislike the inconsistency here – either provide names for all locations or none – when I give one of these places a strange name, chances are I won’t run with “Forest of Galdring”, right? Anyway, I think that’s inconvenient. Your mileage may vary.

All righty, so the first thing you should know is that this pdf actually manages to evoke a latent sense of mysterious antiquity rather well: There is an Ozymandias-like statue to be found and a titanic statue, impervious to the ravages of time, looms in the fields. A nice change of pace for everyone familiar with Geoffrey McKinney’s usual work would also be that there are quite a few benevolent folks to be found: A friendly, good cleric; an eccentric magic user and his golem – there are friendly folks to be found and indeed, the settlements that dot the map are benevolent as well. A bit of weirdness here and there, like a save-or-die transforms-you-into-ice elemental anomaly exist, but are sparse.

As mentioned before, they sport lists of relevant NPCs and, unsurprisingly considering the title, mostly concist of dwarven “kingdoms”…which I call tpldks. Tin-pot little dwarven kingdoms. If you got that reference, you’re into classic British satire.731 is the population of the biggest “kingdom” – yeah, more like village in my book, but I digress. The good thing about these kingdoms is that they’re unique and have some interesting visuals: There is e.g. one whose king does not age, courtesy of a frozen flame found in a meteor. Come on, that’s cool!

But we’re getting ahead of ourselves – there are also a few elven enclaves (with pitiful populations), but…well…elves. These tie in with perhaps the biggest treasure that can be found in the region – a frickin’ frost brand +3, +6(!!) against fire using/dwelling creatures. Know what the PCs have to defeat for it? A couple of displacer beasts. Lol. A better random encounter. More importantly, the blade is an elven relic – and can be traded to the elves of a small high elf kingdom to get the title “Elf-friend” – or be exiled, if refusing to hand it over. What does the former do? You are treated as Cha 18 and are treated as an elf of that subrace. Which is btw. not as hard a title to get as you’d think it is – an ancient battlefield sports no less than 3 broken items that each allow you to claim the title from one the elves. You could thus become quadruple elf-friends. …I’m sorry, but I think they should at least be tied to a given enclave? Moreover, the battlefield is not haunted or particularly dangerous – there’s no real risk-reward ratio here.

Speaking of elves: Know how I mentioned these important NPC-lists for settlements? They are NOT exhaustive, which can be really annoying. There are e.g. the remains of an elven guy…and the book suddenly tells us that it’s the missing brother of the elven maid xyz in one hex. Guess what? First time we heard about both maid and missing brother – the target hex mentions neither of them. Combined with the basic presentation etc., instances like this make the module really inconvenient. A pair of semi-friendly dragons wants a piece of art from a dungeon…in a hex that is not mentioned in the module. There is painting with broad strokes and there is inconvenient. This is the latter.

The primary evil-doers in this region of the wilderness would btw. be cultists prone to collecting heliotrope flowers, for they consider them to mimic the purple worms they worship. This cult, apart from the flower-aspect, remains pale, though the worms are tied in neatly with the biggest kingdom of the dwarves: Their king sits on a throne of purple ivory.

What’s that? Well, you see, much like regular ivory, purple worm teeth may look white, but are actually tinted purple, darkening with age. Thus, they command a higher price, the darker they are, and mottled worms in particular are sought-after…which is all kinds of awesome. Here’s the problem. That’s pretty much it.

This has one of the coolest titles EVER. I mean, can you imagine something more METAL and AWESOME than “Worm Wars of the Dwarven Ice Kings”? I could see vistas of halls wrought from glaciers, legions clashing while riding deadly polar worms, remorhazes, when thinking “high-fantasy” here. For grittier options, I could see subterranean vaults and ancient halls, slowly rotting as the dwindling populace fights a retreating war against the corruption of the invading worms…

We get NONE of that.

Heck, this doesn’t even sport a WAR. Not even a small altercation or brawl.

And no Ice Kings either. The tiny kingdoms are…well, not impressive. More like dwarven burgomasters.

I have no idea where the “Ice”-angle is supposed to be coming from. One kingdom has beautiful caves…which is wondrous and neat….but are they made of ice? No clue.

And don’t get me started on the absence of Worm Wars between ice kings or wars the ice kings wage against the worms. NOTHING.

Unless the dwarves enjoy the classic video-game franchise on their PCs to settle disputes, I can see no worm wars here…sorry. I know that one was bad.

What I’m trying to say is this: Even in regular high fantasy or gritty fantasy, without any weird, when going full-blown Tolkien, this should have been amazing. It isn’t. It is painfully dull and generic. There are a couple of instances where McKinney’s talent for crafting wondrous vistas shines though, but I have never, in my entire life, been so utterly disappointed by a wilderness module. With a premise like “Worm Wars of the Dwarven Ice Kings”, this had its work cut out for itself.

Instead, it delivers pure frickin’ blandness. Again, I LIKE traditional fantasy. But you can do that without being so comparably boring. If this had a title like “Moderately Dangerous Dwarven Pastoral Mountains”, my disappointment would probably have been less pronounced, for that’s what this is.

This module has one of the coolest titles ever and squandered it; it has some nice and evocative locales…but ultimately, it falls woefully short of its promises. My advice is to read the title and design what your associations are – it is bound to be more exciting than this one’s content. My final verdict will clock in at 1.5 stars, rounded up for the purpose of this platform. Barely, and only because I can see some folks enjoying a few entries. Now here’s to hoping module #2 of the series turned out better…

You can get this bland snore-fest here on lulu.