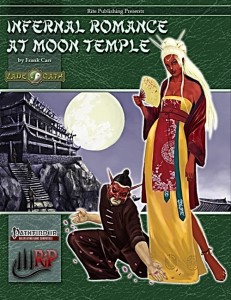 This adventure for the “Heroes of the Jade Oath“-supplement is 45 pages long, 1 page front cover, 1 page editorial, 1 page SRD and 1 page back cover, leaving us with 41 pages of content, so let’s take a look, shall we?

The player characters arrive at this historic site in time for the festivities and, via numerous lore DCs, can unearth even more information on the uncommon city. As heroes are wont to, they are contacted by the Mandarin – unbeknownst to the public, one of the pieces of the shawl of the moon goddess has been stolen and the moon goddess may well show her displeasure by unfreezing the tidal wave if the ritual is not properly conducted. The officials have deducted that a participant of the festivities is probably the culprit and thankfully, the Dragon-Lion Dance combat tournament is today and the PCs can do some research here as well, bringing them up to snuff regarding the Cult of the Lost and the folk heroines of the Stone Monkey Maidens, who are in conflict with the local mandarin. The PCs will have to participate in the performance combat of the Dragon-Lion Dance for the honor of being chosen as  Moon Hunters – and the combat follows interesting rules: The participants have to hold on to the dragon-lion costume, can’t move fast and the lead performer needs to provide dancing steps and the lead also needs to hold a lantern in the dragon’s mouth. Fighting is strictly non-lethal. The participating teams enter the arena (fully mapped, btw.) in a free for all, with each team having some modifications to the basic stats – a combat the PCs will definitely remember – it should be noted, though, that DM’s should probably have some experience under their belt since the combat per se is a bit abstract – some additional guidance for the behavior of the various teams would have made running this easier. The second test would be a test in courting a spirit attendant in the Blue Tavern of Eight Tails – here, we essentially get a complex series of skill-checks and social interactions in a kind of ceremonial masquerade – here, persistence in spite of incompetence may be seen as a type of virtue in itself. 5 fully depicted NPCs, all with their own agendas and motivations await the PCs here and while the basic rules for the contest have some minor formatting glitches, overall this section should be considered rather enjoyable. Cara Bui, a shenxue courtier gets promptly kidnapped by Faen pirates as the PCs are busy and a wild chase ensues – a complex chase with various obstacles etc. that leads the PCs to the Wharf Towers, where they will have to free Cara Bui from the clutches of infamous Faen pirate Tiger Eye – only to have to realize that the two were former lovers and the courtier with the fake shawl.

The appendix contains the information for the moon shawls as well as the template for becoming essentially a vampiric mandragoran and much of the origin myth is duplicated on a handy 1-page handout for players.

Editing and formatting are very good, though not perfect – I noticed some unfortunate formatting glitches, though none that deterred from my enjoyment of this module. Layout adheres to HotJO’s beautiful 2-column full-color standard and the full-color artworks are beautiful, though inexplicably pixelated in places – something not found in the Arcana Evolved original version of the module. The cartography in full color is player-friendly and extensive. The pdf comes fully bookmarked for your convenience.

Author Frank Carr knows his lore – this module breathes high-fantasy WuXia-wonder in all the right ways and literally NONE of the encounters herein is anything less than high concept: This is a tour-de-force if there ever was one, one that breathes style and panache in every second. Genre-wise, this is a very much event-driven module that allows DMs to set up their own pace, but this is also a module that requires an experienced DM: The  respective encounters are not that neatly tied together, the transitions very much remaining up to the DM, also due to the modular nature of the module which allows for various ways in which encounters can be drawn out or even cut from the module. This is no module for the faint of heart, but an experienced DM can create one glorious experience here – also one that could easily be run in the context of a convention.

Now usually, the weak transitions and minor formatting glitches here and there would see me rate this down more, but I honestly can’t bring myself to do it – why? Because this module breathes the spirit of WuXia, of alien vistas and made me more excited for the Lands of the Jade Oath than I’ve been in quite a while for a setting, up to the point where I really wished there were more Jade Oath-adventures out there. It’s that imaginative and cool and  having played extensively in far eastern campaigns, this should be considered a joy in its potential. I should nitpick this one so much more, but its ambition and beauty, at least for me, offset this pdf’s flaws like aforementioned formatting glitches or e.g. mentioned listen-checks which should read perception etc. For me as a person, this would then clock in at 4.5 stars, rounded up to 5 – if you don’t care about aforementioned glitches. If e.g. reading “listen check” annoys you or if e.g. the mentioning of a jump-check (when two lines before that, we were talking acrobatics…) annoy you, then detract 1 star. Especially when viewed back to back with the AE-original, this one feels a bit inferior.

If you are not an experienced DM or very nitpicky about not wanting to work with transitions etc. then this is not for you, though. One more note – Heroes of the Jade Oath is not an optional book to run this, in my opinion it is required. Also, if you’re playing both Arcana Evolved and Pathfinder, go for the Arcana Evolved-version (which I’ve also reviewed) – its formatting is much better. In the end, my final verdict will be in-between a good and an ok offering, at 3.5 stars – As a reviewer, I will have to round down for the purpose of this platform, while still encouraging you to check this out – the concepts of the encounters alone are worth the asking price!