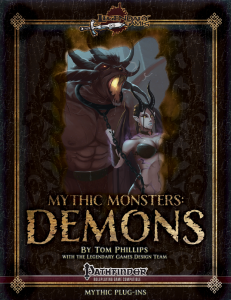 This is Legendary Games’ first collection of monsters upgraded to Mythic-level, focusing on demons this time around and clocking in at 30 pages of content, 1 page of front cover, 2 pages of editorial, 1 page ToC, 1 page SRD, 2 pages how-to-use/introduction, 2 pages of advertisement, 1 page inside of back cover, 1 page back cover, leaving us with 19 pages of raw content, so let’s take a look!

We kick this pdf off with notes on mythic demons crashing through bindings, bargaining and possessing mortals before diving headfirst into the mythic demons provided herein – from humble CR 2/MR 1 Quasits over Babau, Bodaks, Glabrezu, Hezrou, Incubus, Kalavakus, Nabassu, Elite Nabassu, Shadow Demon, Succubus all the way to the CR 25/MR 10 Balor, we get quite a solid array of statblocks for the respective demons, all mythified for your convenience and with thematically fitting abilities to boost – whether it’s the succubus revealing herself in abyssal glory (potentially quite literally), thus making all crash to the floor growling (and take cha-damage upon shaking it off),  an elite nabassus manifesting in conflagrations of fire upon being summoned (potentially turning those slain into mhorgs!) to the mythic klavakus that can use their mythic powers to command their slaves to commit suicide – these demons are NASTY with a capital “N” and come with appropriately twisted builds and abilities. Usually, the statblocks also mention where the non-mythic version of the demon can be found, though weirdly both succubus and shadow demon lack this specific information.

And then there is the Gulgerak – at CR 22/MR 9, these gigantic demonic siege engines are six-legged, two-headed wolves that sport chains on which lesser demons dangle for a both awe-inspiring and superbly deadly foe – including an origin-myth, description-fluff and an awesome full color artwork, the second apart from the cover artwork herein. An awesome creature that shows well why author Tom Philip’s name can be seen on various awesome supplements out there.

Editing and formatting are very good, I didn’t notice any significant errors. Layout adheres to Legendary Games’ 2-column full-color awesomeness and is a beauty to behold indeed. The two pieces of artwork are great and up to the highest standards of quality and the pdf comes fully bookmarked for your convenience and with a second, more printer-friendly version.

This pdf provides awesome takes on those poor demons left out in the original Mythic Adventure book (which should have simply provided more paths and instead deliver a whole bestiary as a separate book, but oh well, that’s what LG is here for…) and covers a wide variety of demons – and I get why dretches don’t get a mythic equivalent. What does sour me a bit is that this pdf, while covering its targets well, does not cover…well, all demons. Call me annoying or nitpicky, but when I saw this one announced, I expected to see all demons covered that were left out of the MA-book – at least regarding Paizo’s core bestiaries. So where’s the Coloxus? The Shir? The Omox? The Shemhazian? The Vrolikai?

I could understand them being left out, but with the inclusion of the bodak (not a demon, but an undead), I can’t help but wish for the book being about twice the size and complete in its coverage at least as far as the bestiaries go. (Mind you, not starting with the demons from Book of the Damned 2: Lords of Chaos or the Worldwound-supplement…) Now I’m wholly and completely aware that I’m unfair here – but still, the absence of the bestiary demons weighs quite a bit on my mind. I understand that further demons would have increased the price, but personally, that increase would have been made up for by the comfort of having all (Bestiary-)Demons in one handy book/pdf. Perhaps if there’s a sequel I can print them all out and file them in the same folder… Still, at least for me, that’s a lost chance.

Don’t get me wrong: As provided, the statblocks are solid, the new creature rocks hard, the original mythic abilities are iconic and fitting and overall, I can definitely recommend this pdf to DMs looking for a mythic edge for the demons covered by this pdf. Still, at least to me, it feels not complete and, while I still recommend this pdf, can’t do so as unanimously as I would have liked. HOWEVER, at the same time, penalizing a book for something *I* would have done differently would not be fair  and I have to take into account that several people out there may not mind not all demons being in one tome – hence, my final verdict will clock in between considering this book “good” and “excellent”, at 4.5 stars, rounded up to 5 since my gripes can’t be universally applied and since the content that is here, rocks hard.

You can get this collection of Mythic Demons here on OBS and here on d20pfsrd.com’s shop!