By this Axe (OSR)

By this Axe (OSR) 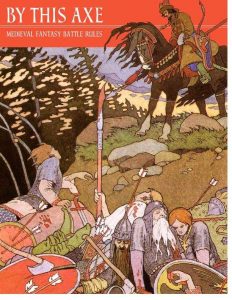 This pdf clocks in at 12 pages, 1 page front cover, 1 page editorial, leaving us with 10 pages of content, so let’s take a look!

So, what is this? Well, it is basically a mass-combat mini-game system for Labyrinth Lord, and not, as the title may suggest, a Kull-reference.

The system wastes no time and immediately begins with its rules: There need to be 2 or more armies. Each army will have 2 or more units.

A unit of infantry consists of at least 3 figures, and may contain up to 25. Cavalry units contain at least 2 figures, up to 15. Players have free control over formation and how a unit is organized.

Each figure is an abstract representation and thus may represent any value of actual characters represented, with suggestions being there for 1:5 and 1:20 ratios.

Figures have attributes: FC (Fighting Capacity) represents skill, morale, cohesion, etc. In most combat, figures roll equal to or under its FC to hit. FC ranged from 1 – 5, with 5 being exclusive for heroes and monsters.

Str (Starting Strength)represents the number of figures in a unit as it begins. It is used for morale and identifying the unit.

AS (Armor Save) is the number under which a unit must roll when hit; “S” denotes shields – this bonus is canceled out if attacked from the rear or flank.

MV denotes Movement and should be self-explanatory. WP denotes the weapons carried. SA lists the special abilities of the unit.

Dice-wise, you only need d6s. You roll with a d6 for each figure, under or equal its modified FC – on a success, you hit. Same goes for AS; rolling under the value saves the figure.

PCs are not included in units – they are treated as individuals. Each army also has a general, who can only be killed in individual combat or when the unit led is reduced to a fraction of its size. Based on the general’s leadership ability, he may draw order cards per turn – one to 5, the more the better. This ties in with the optional control system – cards are drawn from a playing card deck, and they may be played by the players during a respective phase in combat. Up to 3 cards may be retained at the end of the turn, all others are shuffled back into the deck. The playing of cards adds a significant depth to the proceedings, with each suit offering usually 5-6 grades of different orders; diamonds provides the same benefit for all cards. This subsystem definitely can be expanded by the enterprising referee, and it emphasizes PC-relevance, which is a plus.

But let’s take a look at the combat round, shall we? Things proceed as follows: First, we draw order cards (if we’re using them – which we should); then, we move to the duel phase – here, you can obviously challenge foes to personal combat if close to them; declining costs all leadership benefits for the turn and prevents the leader from participating in an attack or rally a unit. Duels may obviously be resolved with your game-system of choice, but you can also use the quick resolution rules, which include 4 sample suggested die pools for a variety of hero-types. The duel—participants may then assign their dice in the areas for attack, parry and dirty tricks – only one die may be assigned to the latter, unless the character is a wizard. We all know they fight dirty. Dirty hits that are successful may cause targets to forfeit dice from atk and defense, then you roll attack, then parry. Quick, painless and still somewhat exciting.

After the duel phase, we move to the ranged phase, which includes its own to-hit table; after that, we cover movement and then, melee. It is relevant to note that distances for ranged weapons, challenges, etc. are based on inches, thus assuming that you use minis. This is relevant since e.g. terrain can influence your movement rates. Nice one: Musician in the unit increases movement.

Morale is checked after losing 3+ figures from either ranged fire or melee that turn; when at below ½ Str; when attacked in flank or rear and when a friendly unit routs in the vicinity. Minor complaint – “rangedfire” should probably read “ranged fire”; Morale is btw. tied to FC as well, and the system differentiates between ranged and other moral tests. Units failing the morale test will attempt to escape from the battlefield, but characters/generals can rally them, depending on their leadership levels.

The pdf provides rules for using truly larger than life heroes that can attack units on 1:5 and 1:20 rules, with a pretty smooth and basic system for mages in combat as well. Priests and high priests can cancel incoming attacks or add bonuses to the saves of allies. Both priests and mages are good for the morale of units in which they are embedded.

We also get a page in which monstrous units are covered – from Uruk-Hai Orcs and their regular brethren to Newhonian ghouls and serpent men. It is also here that a variety of special abilities are noted. Monsters with more than 3 HD are treated akin to fantasy heroes in the system. How does that help you to determine the strength of the PCs in this mini-game? Well, there is a pretty simple and painless guideline to translate characters to the system; same goes for determining leadership scores.

If you want a balanced encounter, there even is a Warhammer-esque point-cost list.

Don’t want to play Warhammer-lite? The pdf also features abstract mass combat: Add FC, AS and bonus modifiers together, multiply that with number of individuals in unit divided by 100 – you get the US, Unit Strength.

Before battle commences, both sides choose a stratagem – 8 are provided. Both sides declare troop numbers and describe units and choose their tactical posture.

To succeed, a stratagem requires a roll of 12+ with 2d6 + the general’s leadership value, with successes granting bonuses, though posture does modify the results here. E.g. Ambushes can only be prepared by defenders, and foes deciding for a screened attack modify this by one. There are 5 offensive and 5 defensive postures, with a handy table provided. After rolling, numbers are compared between total US and another table provides the means to determine how it went. Then, you roll casualties inflicted. Pursuit and long-term healing of a part of the casualties is also covered.

Editing and formatting are very good, I noticed no serious glitches. Layout adheres to a no-frills two–column b/w-standard and the pdf sports no artworks, but doesn’t need them at this length. The pdf has no bookmarks, which constitutes a comfort-detriment.

Chris Kutalik’s “By this Axe” represents two takes on quick mass combat resolution: The first is basically a simplified version of Warhammer, while the second is more narrative and suitable for mind’s eye-theatre style games. Both have in common that they work surprisingly well and are presented in a succinct manner. At the same time, the pdf could be somewhat clearer in some minor instances – this may be due to the brevity, but I think the system could carry so much more if tied more tightly to OSR-rules. More importantly, there are a few instances, where the rules could be a bit cleaner – “modify by one” could denote +1 or -1, for example. While it is evident from context which is meant, instances like this detract slightly from how quickly you can implement the system. Still, considering the low and fair price point, my final verdict will clock in at 4 stars – worth getting if you’re looking for an easy way to quickly resolve clashes of armies and command cards can easily be expanded by the enterprising referee.