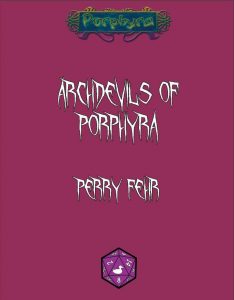 This installment of the Porphyran books on potent entities clocks in at 18 pages, 1 page front cover, 2 pages of SRD, leaving us with 15 pages of content, so let’s take a look!

All righty, this pdf should come as no surprise to anyone who read the Caster Prestige Archetype series – much like the installment on Demon Lords, there is a class in that series that ties directly into the portrayals herein. The archdevils within this pdf come with full Inner Sea Gods-level of support – this means that we get a reprint of the Deific Obedience feat as well as 3 boons per archdevils to add some customization options to the respective worshiper.

The respective archdevil entries mention not only favored weapon, but also favored instrument and favored animal. Domain-wise, the Big chief Sathax gains 4 (as well as 4 sub-domains), with the other archdevils gaining 3 domains and subdomains, respectively. There is one exception to this rule, but I’ll get to that later. It should also be noted that each of the respective archdevils comes with a spell-preparation ritual and, obviously, an obedience. But yeah, Sathax – this fellow, the Grand Archdevil, the snake in a robe is elitist – and in the grand tradition of archdevils, his cult and worshipers emphasize quality over quantity – no wonder, the 3rd boon lets you 1/month, on full moon nights, beseech the archdevil for a wish – not a big fan of making this a Diplomacy check with just a single DC – a more modular DC would have been more elegant here, but that is just a design-aesthetic complaint – since the boon is restricted, I have no issues with its massive power.

The Chained Queen, born from a tryst between Sathax’s deceased wife and the god Kamus, the divine child has become ruler of her own empire, courtesy of Sathax’ grace in the face of pristine logic. Subversion, self-flagellation and “just following orders” are leitmotifs for the lady. Nice dressing: A rosary-type linked chain that acts as a means to depict rank in the church.

Duke Melektus is all about seeming; about appearances over substance; the fellow is the tarnished child of light, twisted to lead the mortals astray – from blood-letting to other quak-remedies, he is also the patron of healing – though of healing that is tainted; the boons reflect that really well, with e.g. parasitic powers. Truly unique and flavorful write-up!

Duke Mastema, Khan of the Asherake, is the second son of Sathax – bold where, Melektus is subservient. He chose to rise through the ranks of devilkind and sports only contempt for mankind, preferring more powerful races – he is the concept of merit blended with elitis on a racial basis. Nice!

Duchess Hadriel is the firstborn of Sathax, mistress of domination. Her mere presence enslaves mortal minds and she prefers females to males, causing some consternation in hell’s hierarchies. Ambitious beyond belief, she hopes to claim proper demi-goddess-status…and she is slowly getting there, with calculations and a focus on myth/planning serving as a backdrop to her boundless ambition. Ibolis is Sathax’ ally – at least as far as that is possible for a being of pure darkness, the master of singularity. Mysterious, intriguing and shrouded in a veil of secrecy, the arch-devil is not part of the family of Sathax, but he is sufficiently strange to act as an intriguing wildcard. Now, I did mention the offspring of the grand lord of hell’s wife before – this demigod and archdevil would be Kram-Hotep. He is really interesting, embodying the fear of dying, of being lost in the fabric of history. Mortality, to be remembered – his Twilight-Pyramid and unique flavor most assuredly make him stand out – he seeks not souls, but slaves. Courtesy of his status, he does gain 4 different domains, not just 3. All in all, I enjoyed all of the archdevils presented herein.

The pdf then proceeds to depict a variety of infernal magic items – framed by some prose, we get 8 different items: Books of Infernal Extortion contain names – monsters and beings identified can then be commanded, even at range via e.g. whispering wind – on a failed save, we have a curse on their hands…nasty! At 8K, pretty inexpensive, but the evil nature should keep it out of PC hands. Hopefully. Cloaks of fiendish recovery allow the wearer to crouch down, becoming invisible. They can reveal themselves in a puff of smoke and provide limited spell recovery. While only usable once per day, I wished that the activation action was more precise than “crouching down” – not a big issue, since you can research that, but yeah. Coins of corruption are lucky for LE beings and hamper the healing received by others. Really cool!! The Cube of Kram is a twist on the Hellraiser-cube, tied to Kram-Hotep’s domain – it can be cheesed…by intention! You see, that’s part of the fun here and actually comes fully codified in rules regarding responses taken. Cool!

Flails of humiliation cause nonlethal bonus damage versus foes with resistance and immunity to electricity – nice one. I can see devils enjoying this. Rod of cynical duality heals targets, but also shatters objects – and it MUST alternate. There’s a price to be paid, I guess… The Sceptre of Seven Circles is an artifact – the rod of the king of devilkind and allows the wielder to command legions of devils. Finally, superior’s rings are really creative: You designate a target in sight before initiative is rolled; Your initiative is set at +1 higher than the target. Amazing! While very potent in mythic contexts, it can actually help NPCs defeat the rocket launcher tag-strategy. In regular contexts, it most assuredly can be a puzzling, fun item to stick on foes. All in all, a really cool magic item section.

The pdf also contains new spells: The Blessing of Sathax fortifies your d20-rolls with Charisma-modifier 1/round. Commision Pergensia Bodyguard nets you a powerful bodyguard – not to fight for you, but to keep you from harm. Well. Devils. You’ll better shore up on your logic skills. Enforce fate can only target a foe once per 24 hours: The caster rolls 5 d20s and the target has to use the results in the order determined by the caster. NASTY! Hard darkness is basically a darkness and solid fog crossover. Hotep’s Inexorable Pyramid is a REALLY creative variant of forcecage. Love it. Odious betrayal is also really creative: It penalizes teamwork sharing and similar support with damage and negative conditions – powerful, but requires the set-up of a creature under a compulsion. Really cool. Summon petitioner slave is self-explanatory. The spells cover the occult and ACG-classes as well, just fyi.

Next up are two new subdomains: Betrayal is a subdomain of Evil – it allows you to steal the AC of allies. Nice idea. The blackmail subdomain of the knowledge domain ties in with lorekeeper and allows you to penalize foes. Caps for the subdomain abilities prevent abuse. Nice. There also is the cold domain, with a numbing touch and later, an aura of cold. Nice. Next up is a whole page of traits. These include 1/day causing a target to lose 1 point of initiative. Bonus types are, with one exception, concisely codified and the traits are meaningful without being overpowered.

The final page of this pdf is devoted to the Suppligon devil, a CR 8 goat-thing with 5 flaming eyes in pentacle-form. Yeah, damn creepy! The stats are solid as well – huge kudos!

The pdf also comes with a bonus-pdf, also penned by Perry Fehr, which depicts the Rancor Daemon (CR 14): Warlords with huge, mantis-like claws, whip-like tongues and massive swords, they look incredibly badass, are commanders that get better when supported by nearby daemons– and sport neat, solid stats – big kudos for a really neat bonus critter!

Editing and formatting are top-notch on both a formal and rules-language, I noticed no true glitches herein. Layout adheres to a printer-friendly 2-column standard with purple highlights. The pdf sports a ton of artworks: Full-color symbols for all archdevils and the monsters also get amazing, full-color artworks – all original and damn cool! The pdf comes fully bookmarked for your convenience.

When Perry Fehr takes his time to properly craft his material (or when his glorious ideas are properly streamlined by a good developer), something beautiful happens. This is a prime example of such a case. This pdf is refined, professional and amazing – the archdevils all sport at least one unique angle; they breathe the proper flavor. The obediences are creative.

Creativity. That’s something you can find in pretty much all of Perry’s pdfs, but here, the creativity is paired with proper, careful execution, marrying the art and craftsmanship aspects of design. In short: This is an inspired, amazing pdf I wholeheartedly recommend. Oh, it’s also, much like all of PDG’s books, open content. In short: This deserves being supported. If you enjoy the infernal and need some great tools, then check this out. My final verdict will clock in at 5 stars + seal of approval.

You can get these cool archdevils here on OBS!