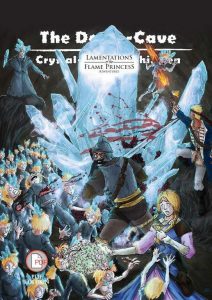 This module clocks in at 58 pages, 1 page front cover, 1 page back cover, 1 page editorial/ToC, leaving us with 55 pages of content, so let’s take a look!

This review is mostly based on the physical version of the book (36 pages – layout was redone for the pdf!), which was kindly provided by one of my friends/supporters. It was thus moved up in my queue as a nonprioritized review. The physical version of the module comes with a detachable cover – on the inside is the full-color map of the dungeon featured within this module.

There are a couple of different things you need to know about this module to understand it. The previous FreeRPG-offering by Lamentations of the Flame Princess, the absolutely PHENOMENAL “Better than any man”, was met with some obvious misunderstanding; it was partially boycotted etc. for its mature content in both violence and the few, subdued sexual themes. It was designated as a module for adults, ages 18+. I don’t get it. At all. Anyway, this is not where things stopped – instead, there were some seriously messed up claims about the, admittedly, dark themes of the module – it was supposedly about “killing children.” It was supposedly extremely random, unfair, etc. – the claims kept piling up. While BTAM is hard and unforgiving, as anyone who has actually read the module can attest, these claims have in common that they’re patently FALSE.

Well, you know what happens when you poke the bear, right? So, this time around, we get a module that is based on all the things that folks complained about. An unforgiving, merciless, extremely random module that is, in a way, about killing children. Kind of. But not really. That being said, this is NOT a module that takes itself seriously. It’s perhaps the most ironic, sarcastic module I have ever read. If the basic premise, its adult content (it’s 18+ for a reason), sounds like something you’d hate, then steer clear. Similarly, if you don’t have a sense of humor and if your player can’t get into a mindset of playing a ridiculously lethal, highly random meat-grinder, of experiencing “funny” deaths, then you should probably stay away.

One of my basic tenets in RPGs is that I simply don’t want to see kids being slain. In the end, we’re playing a game, and while the death of children can make for high stakes, the PCs should have at least a chance to save them. I usually strongly object to PCs being faced with kid “enemies” – i.e. adversaries that primarily exist to be vanquished.

In this case, I am okay with the premise, though – and you’ll soon see why, when I’m discussing the storyline. In order to do so, though, I have to go into SPOILER-territory. Potential players should jump to the conclusion.

So, in a small town, something weird happened – women from the age of 14 to 48 suddenly all freak out. Andrew is missing. Who is Andrew? Well, no one seems to really know – the women claim that they gave birth to a blond, blue-eyed kid named Andrew. Their families and other kids have never hear of Andrew and confrontation of multiple women exhibiting the same phenomena does not yield help either. The premise is eerie, horrific and gloriously weird and could easily be scavenged in a variety of cool ways. The women are, understandably, distraught about the loss of “their” individual Andrew – so, in order to reestablish peace, it’ll take some investigation on behalf of the PCs.

The truth is pretty much guaranteed to end any discussion of whether you should take this module seriously: Arthur Presterton Stuart-Lethbridge, former member of the clergy, found himself enamored with the dark arts of sorcery. He found a cave with strange crystals and found a neural interface, using his mystic powers to tap into the crystal. Which proceeded to dump 22 centuries of knowledge right into his brain – basically, he had our world’s internet and more downloaded straight into his brain, leaving his identity in tatters. In its place, there was the powerful Wiki Dot Pod, an amalgamation of entities worshipped by the “aliens” (aliens or…well, you know, impossibly futuristic versions of us…) who left the crystal there. His brain is suffused with useless trivia, brands, basic urges – you name it. His demeanor changed to reflect an amalgamation of all bad super villain/dictator tropes. He did not gain wisdom, alas – and so he did what you’d expect with the crystalline machinery, considering its potentially gene-altering powers – he proceeded to…how to put that delicately…hump one of its valves. The eponymous crystal children began appearing. And so, now he plots for WORLD DOMINATION! Of course!

You see, the telepathic computer inside the crystal can splice together DNA – it can create owlbear-like things and has some norms that it adheres to. If only one sample of sexual reproduction is provided, it will begin scanning the vicinity – once it finds a genetic match, it telepathically extracts a DNA sample from the living match and generates – bingo, a crystal-headed kid. Andrew.

How could anyone take this seriously?

Okay, okay, so, the kids – they actually have an interesting mechanic – namely a tree: As long as many of them exist, they are individually weak – but the more crystal-headed kids your PCs elect to murder-hobo, the tougher the survivors become – the more hit points they’ll have, the more HD and the more mêlée damage they’ll inflict. Which is an interesting set-up, critter idea-wise. (Easy to reskin, if the concept of crystal-headed children offends you and yours…)

Anyways, here’s the thing – neither Wiki, nor the crystal-headed children are per se hostile – short of attacking him and/or messing with his stuff/private rooms/etc., Wiki will be…kinda nice. As far as completely bonkers guys go. The only crystal-headed children that are hostile would be some mutated rejects – the early prototypes, if you will – 4 of them can be found, locked away in one room of the dungeon. Fun fact: The crystal-headed children will obey their parents (who recognize them as “their” Andrew) flawlessly. You can make that a statement on stifling creative impulses, a scathing commentary on both private and public education – or you can just take it in-game and use the distraught mothers to solve the adventure without having to deal with killing them. Yes. That’s generally possible. Unlikely, but yeah.

Sooo, the dungeon. The dungeon actually has next to nothing to do with the story, the children, or Wiki. It basically is the rebuttal to the claims of randomness. Cranked up to 11. In the dungeon, there are colored buttons. A ton of them. At the end of dead-ends. There are 10 (!!!) tables of random effects for pressing them. These include getting an alien implant – upon exiting the cave, basically unbeatable super-aliens arrive. Two factions of them. They vaporize everything. There’s a chance that the planet’s destroyed. Why? Because random. The button pressed also influences a room, where liquid boils – and, you guessed it, random effects for vapors and contact, depending on color. Yes, the majority of effects are not benevolent. There is also a sentient gas that can generate a direct link to a deity for believers. Oh, and the gas thinks that character number 1 entering it is the standard – after that, it tries to adjust other life forms. A PC may also inadvertently fuse his head with a 15-ton disk of crystal, becoming the crystal king – who may command all crystal-headed beings. Hey, another way to solve the module sans killing everything! (Okay, you’ll be stuck with a massive, crystal disk on your head…but yeah…)

The random encounters are similarly weird and potentially may offend devout Christians – the crystals, at one point, try to soothe the PCs, generating a comforting image to lead them – Jesus Christ. Who bleeds bread and fish when cut. Yes, there’s an image. There are also a couple of beings in containment crystals – a fighter, a lizard-beast without heads, but two rear-ends (cue insert Futurama jokes…) and a being that constantly exudes glue. Because…you know….That’s why!

Editing and formatting are very good, I noticed no serious issues. Layout adheres to a nice two-column b/w-standard. The pdf sports color maps, the print copy only has the overview map in color. The artworks by Gennifer Bone in b/w are well done. The pdf comes fully bookmarked and with customization layers as well as internal hyperlinks to the map. That being said, none of the layers allow you to turn of the annoying numbers on the map – which means that there’s no real player-friendly version of it. Cartography is btw. not bad – it does its job.

James Edward Raggi IV’s adventure is significantly less grotesque and horrible than I frankly figured it’d be. Seriously, after all the complaints and screaming online, I thought that this would be a grimdark monster of a module, something stomach-churning, something despicable.

It’s none of these things. If your PCs are inclined to murder-hobo everything…then yes. Then this will be a pretty dark affair. Heck, it can turn out that way, even if you don’t plan it. Because: Random! That being said, it is so hilariously outrageous and over the top in its characters, the premise, etc. that I really don’t get why anyone would take it at face value.

Which brings me to the more relevant point: Is this a good module? HECK NO. It’s random as all hell. The premise is mired, at least RAW, in intentionally atrocious design-choices. The dungeon is, by design, so random that it’s nigh unbeatable. If you value your characters, game world, etc., then steer clear of this module. Would I pay for the print version? Nope. Sorry. I’m a collector, yes, but just for its shock-value and funny moments? Nope.

That being said, at the same time, this does have its merits, if only for a special set of audiences: Do you and your group share a really black sense of humor? Can you enjoy deliberately dickish design, laugh about it on a meta-level? Can you laugh about ridiculous, potentially really unfair PC deaths? Then this may be worth checking out – the electronic version is PWYW, after all! I can see myself enjoying this module under very specific circumstances: Namely, when I’m playing a one-shot at a con, am really drunk and playing with a group of likeminded, similarly inebriated and fun-seeking individuals. In such a context, this may be a hilarious blast. In a sober state, personally, I did not consider the module per se funny – the premise? Yeah, you can work with that. Even some aspects of the dungeon. But the dungeon itself is so mired in utterly random ridiculous events and actions that it would annoy the heck out of me in a sober state.

In a nutshell: This is not the antichrist of modules; considering its genesis, it’s more playable than anticipated. But its flaws make it hard to recommend this as anything more than a curiosity. If you want excellence, get “Better than any man.”

How to rate this? Well, honestly, I should probably rate it lower regarding its design, but since I can see value in the farcical nature of the module, my final verdict will be 2.5 stars, rounded up due to the PWYW nature of the pdf.

You can get this gonzo module here on OBS!