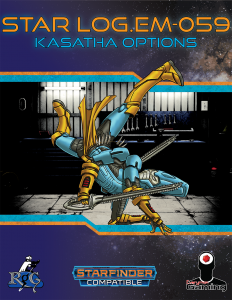 After we receive a brief piece of fluff that contextualizes the Kasatha within the Xa-Osoro system, we begin this supplement with the kasatha paragon archetype – obviously, this one requires that you’re a kasatha. At 2nd level, the alternate class feature nets you a feat that requires being a kasatha or having “Kasatha” in its name. This may be taken as a replacement class feature at 4th, 6th, 12th and 18th level as well.

The pdf then proceeds to provide 9 new feats:

-Adaptive Stride: Requires Nimble Moves and makes you choose a terrain type from a list; in that terrain, you may thereafter move unimpeded through nonmagical terrain at normal speed.

-Archaic Weapon Proficiency: Attacks made with weapons, including unarmed ones, never count as archaic. This can be somewhat problematic, as the archaic property can usually be used as a means to balance some items. While this is not something SFRPG has been doing extensively, it is clearly the design intent behind how the archaic property is structured, so this could become broken rather fast.

-Armorless Adept: When unarmored, gain class level as insight bonus to EAC and KAC. You lose this bonus when unconscious or asleep, and your flat-footed penalty to AC increases to -4. The latter should only apply when unarmored, imho. RAW it also applies when such a character wears armor. Nice: Effects that provide immunity to this effect are accounted for and instead reduce the penalty. Strong, but cool option. Like it.

-Efficient Fusillade: Builds on Fusillade and halves your ammo-consumption for Fusillades. Solid.

-Honorable Edicts: +2 to saves vs. charm or compulsion – the bonus is untyped and should probably be insight. When affected, you get a second save, depending on the interval by which the duration is measured, and codifies this properly. Nice. Interacts with Personal Customs for a synergy boost.

-Personal Customs: Really cool premise – describe a custom in three categories: Combat, social and wellness. This can be something you do, or refrain from doing. As long as you maintain them, you gain a bonus: Combat lets you spend 1 Resolve Point as an “immediate action” (that should be reaction…) to reroll an attack roll or saving throw and use the higher result. Social shares the same action snafu and lets you reroll skill checks, and Wellness nets you a +1 circumstance bonus to saving throws vs. nonmagical afflictions. I like the notion of this feat, but the action-snafu is a bit annoying. I also have balance-concerns when seeing its benefits in contrast to e.g. the Watch your step envoy improvisation. The combat reroll imho should not use the better result, or have some other limitation. As written, this is a VERY strong feat.

-Multi-Handed Drive-By: Really cool: Drive a vehicle AND use two hands to fight during vehicle chases.

-Multi-Handed Fighting: Builds on Multi-Weapon Fighting. Nets its benefits when you make a full attack with two or more weapons, regardless of type or number of hands required to wield them. I look at this one with some worry when considering the big guns out there. I’d at least have gone with a stricter prerequisite and relegated this to higher levels.

-Multi-Handed Reload:  With two or more hands free, you treat any weapon wielded as a quick reload weapon – here, we have a catch that prevents abuse: Weapons only qualify if their ammo’s Bulk doesn’t exceed 1 or more. It also prevents automatic abuse. Solid!

The pdf also contains a new soldier fighting style, the battle dancer. At 1st level, we get Improved Unarmed Strike or a combat feat, and don’t need a free hand to make unarmed strikes. At 5th level we choose whether damage inflicted with unarmed attacks is lethal or nonlethal and gain a unique weapon specialization – bingo, 1.5 times  character level is added to damage. Natural weapon specialization instead benefits from a further +2 to damage bonus. We also get a +1 insight bonus to all combat maneuvers; on a success, this bonus is increased by a further +1 for every 5 class levels to determine effects. Interesting. 9th level  lets you spend 1 Resolve Point to impose a variety of different conditions on foes you strike with unarmed attacks, with a Fort-save to negate the effect and duration determined by half your choice of Strength or Dexterity modifier, whichever is higher. 13th level lets you add an attack as a reaction after a full attack of unarmed strikes has hit a foe – I assume all attacks, if more than one, have to hit. The reaction-based attack ignores DR and hardness, if any. Alternatively, you can use your reaction to make a combat maneuver attempt selected with Improved Combat maneuver. The verbiage is somewhat unfortunate here, with references like “second attack” being something that may easily be misunderstood. The ability uses the attack bonus of the attack(s) used to set it up – verbiage here could be slightly clearer as well. The 17th level ability, finally, provides immunity to being dazzled, flat-footed, off-kilter and off-target. Additionally, you may spend 1 Resolve Point as a reaction to ignore a wide variety of conditions for 3 rounds.

Editing and formatting are good on a formal and rules-language level. Layout adheres to the series’ two-column full-color standard and the artwork featured is nice. The pdf has no bookmarks, but needs none at this length.

This is John Laffan’s first supplement I’ve reviewed, and it shows ample promise. There are quite a few genuinely nice concepts herein, and while I am concerned regarding the long-term viability and balance of a couple of the options, this nonetheless offers a couple of gems I consider definitely worth taking on board. While I would usually round down, the author benefits from the freshman bonus, which makes me round up from my final verdict of 3.5 stars.

You can get these nice kasatha options here on OBS!

Enjoying my reviews? Please consider leaving a tip on my patreon or via direct donation – every little bit helps!