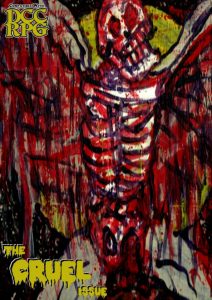 The third installment of the Dungeon lord-zine clocks in at 32 pages, 1 page front cover, 1 page advertisement, 1 page editorial, 1 page b/w con-photo, 1 page ToC, 1 page SRD, 1 page back cover, leaving us with 25 pages of content, laid out, as always in the approximately 6’’ by 9’’ (A5) size, which means you can fit up to 4 pages on a sheet of paper when printing this.

This review was requested by one of my patreons – and provided the impetus for me to check out the other offerings by Death Machine Press.

It should be noted that the back cover contains a rudimentary one-page dungeon drawn in pencil. It’s a nice gimmick, but not particularly remarkable. We begin the ‘zine proper with Julian Bernick’s by now traditional poem – and this time, he takes us to “The Tavern at the End of Time.” A solid yarn, with a bit of a melancholy tint.

After this, we take a look at “Your Animal & You”, penned by Jeffrey Klingbeil – in which we get something that many a judge out there will appreciate, namely statblocks for mundane animals – a lot of them, actually. Need stats for cows? They’re here! So are stats for falcons, ducks, goat, sheep…cool little article!

The second article depicts the content that provided the name for this issue of the ‘zine – Bruno Galan’s “Cruel Dungeon.”

SPOILERS for the general dungeon information ahead. Skip ahead to the conclusion, if you want to play this.

The dungeon has 30 keyed rooms and comes with a functional, if not exactly aesthetically-pleasing map. The map has its scale properly noted, and comes with a grid. The dungeon has no background per se, and is basically an old-school killer-dungeon. Mold and filth is everywhere, and being wounded can result in infection. A lot of man-sized cave crickets may be harmless until attacked, but their chirping makes it necessary to succeed a saving throw to cast a spell. What kind? What DC? Alas, not noted. Resting results in being assaulted by rot grubs and bookworms (ouch!) and every turn, there is a 1/3 chance of being attacked by an orc guard patrol. Doors have a 50% chance of being locked, and a 25% chance of being trapped. These traps could be mechanical or magical, and are obviously not telegraphed. Personally, I do not like this, and poison needles or electrocution are not exactly interesting effects. Spell references in the text are not formatted properly and sometimes reference obvious OSR-spells that have not been properly translated to DCC – such as referencing to wish spells, instead of the cleric’s divine aid ability, and the rooms have no read-aloud text provided.

Okay, that’s as far as I can get regarding the formal criteria of the dungeon, so from here on out, the deep SPOILERS reign. Potential players should skip ahead to the end of the SPOILER-section below.

Only judges around? Great! So, we have a save-or-die poison needle in room #1. We have an improperly formatted burning blade that has a chance of summoning a demon in room #2. The latter made me recall how much better the bonus dungeon in “Sailors of the Starless Seas”, where the thematically-similar fiend blade does a much better job at depicting this concept within the context of DCC. The demon of the blade is not statted, fyi. The dungeon also has a room where two circles allow PCs stepping inside to duplicate themselves permanently, though each copy only retains half the XP. Non-divisible XP result in disintegration. There is a room, where the floor is a pool disguised by an illusion – and once you fall in, you can’t exit, unless the force-field’s properly dispelled. One room contains hybrids of rust monsters and giant crickets. Stats? Nope. None provided. The complex’s boss is btw. a beholder, stripped of the name due to closed IP. The back of the adventure contains a variety of classic D&D critters converted to DCC. Some of these are pretty interesting classics that fit DCC well, like disenchanters. Formatting of rules-relevant material is inconsistent at best, though – sometimes, saves are allcaps, sometimes not. Not all rules-relevant aspects work, though: The asphyxiating pipe mimic, for example, lacks a save DC value…and oversights like this accumulate, to the point where I honestly don’t consider fixing them worthwhile. On the plus side, we do get a solid array of b/w-artworks for the critters.

Next up would be a solid interview with Bruno Gallan, before we move on to a d24 sleep table – roll a d24, modified by Luck. Depending on how you sleep, you gain some minor bonuses and penalties. I enjoyed this table very much – it’s just two pages, but it’s very useful. Perhaps not for constant use, but in a magical/dream-themed environment like Daniel J. Bishop’s fantastic “Cotillion of Hours”? Heck yeah! Thus, the pdf ends on a high note.

Editing and formatting are better than in previous installments of the ‘zine, but that doesn’t say that much, unfortunately. There are still plenty of inconsistencies and oversights on a formal and rules-language level. Layout adheres to a 2-column standard for the animal-article, one-column for the rest. The ‘zine has a surprising amount of solid b/w-artwork. The pdf version has no bookmarks, which constitutes a comfort detriment.

However, the cruel dungeon may be cruel, but it is simply not interesting.

It has a bit of gore for gore’s sake, and the cricket-angle is interesting, but ultimately if feels like a tomb of horror-ish meatgrinder that was converted to DCC without making things more…interesting? This feels like a bad meatgrinder old-school adventure. Traps are not telegraphed, players basically have to guess how stuff works, and spell-references to things that don’t exist in DCC, bland magic items sans the sense of unstable danger and the like, all contribute to the impression that this was an OD&D/AD&D adventure that has been converted to DCC in a pretty minimalist and less than thorough manner.

If you absolutely wanted certain classic D&D critters and an infusion of more vanilla fantasy in your game, and if your players tend to think that funnels are too easy because well-written ones are, I don’t know, fair in their challenge? ….well, then this is for you, though the imprecision regarding rules still require work on behalf of the judge. Note that I’m a guy who LOVED LotFP’s “The Grinding Gear.” Because it was kinda fair in its cruelty, in its challenge.

Even when it comes to classic unfair modules like Grimooth set-ups of Lamentation of the Flame Princess’ “Fuck for Satan”, the module simply doesn’t hold up in atmosphere, creativity, or in capturing the aesthetics of DCC.

There is a room with mutilated ex-adventurers for a bit of grit and gore, but the complex ultimately, in spite of the strong general features in the beginning, never made sense, never felt like a cohesive entity, never became interesting. In short, the most significant content herein failed to meet my standards. My final verdict will thus clock in at 2 stars.

You can get this flawed ‘zine here on OBS.

If you want to support my reviews or leave a tip for all the hard work I pour into these reviews, you can do so via direct donation or by supporting my patreon here!