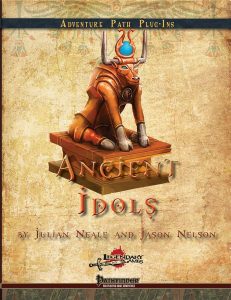 Okay, both fiction and real-world mythology are chock-full with the concept of idols – statues or physical representations of quasi-deities worshiped as false gods; whether it’s the golden calf or jade serpents found by hale Cimmerians in the depths of forbidding ruins. Considering their eminence in fiction etc., it is pretty surprising that PFRPG so far had no rules-representation of the concept of idols in game. This pdf seeks to change that.

So, how does it go about this task? Well, idols behave as something akin to quasi-deific crossover creatures that blend aspects of sentient magic items and creatures – they, for example, sport an ego-score that increases depending on the amount of people worshiping the idol in question. Similarly, other qualities are gained – senses, for example, improve, and so do the defensive capabilities of these items. Interesting: The ability to draw on power from worshipers is contingent on the idol in question actually managing to impose its ideology/alignment on the folks worshiping the idol – this provides a sensible means for the concept of the idol trying to maintain a hardliner approach to its doctrine.

Now, an interesting thing about idols would be that they can’t just be destroyed by bashing them to pieces – they are very much story-adversaries and have roleplaying thus hard-coded into their very fibers. Beyond the basic powers, idols can benefit from sacrifices, gaining additional benefits when magic items are willingly sacrificed to them – and of course, evil idols also draw sustenance from blood sacrifice, which is more abundant than magic items, obviously. This does explain the potentially bad reputation of idols in the context of the game, mirroring real-life stigmatization of idolatry via the dominant book-religions. All of these powers do come with limits – however, holy days may allow the idol to surpass the sacrificial limits. Holy days are typically 3 days a year, determined by the GM and are concisely defined. Now, the idol relying on the power of worshipers does have a downside – Idol entropy, which means that they may fall into dormancy.

Now, the idol engine presented herein provides a significant array of abilities, ranging from channel energy to animating stuff, to gaining the option to enthrall others. One ability is gained at an ego-score of 5, and for every 5 ego afterwards. At an ego-score of 10 and every 10 ego thereafter, the idol also gains an ability that is only available on holy days.

If all of that is not yet enough customization for you, there also would be the Idol Champion template – these beings would be the idol-powered champions of the idol in question, benefiting from the idol’s powers, but at the cost of servitude. Really cool: The pdf goes on to provide a really cool tool that I adored: Since idols are often created on/near ley lines, the pdf addresses one of the most annoying aspects of ley lines v- the need to plan them in advance. With an easy to grasp and quick to roll check, you can simply determine, based on terrain type, nearby sights etc., the presence of a ley line. This may just be a small tool, but I really, really liked it. Speaking of which: Idols are tied to the spirit world and as such, some of the idol abilities pertain to spirits – a category concisely and professionally defined by the pdf. Big plus there!

Okay, so we’ve seen the basic set-up…and now, we take a look at the process of idol creation, which is detailed in an impressive manner: Idol stats by ego-score, bonus hardness/hit points, save bonuses, ability-numbers, suggested CR – all collated in one handy table. One glimpse and you know the modifications. Similarly, idol sizes are assigned sizes – and the didactically-sound process of creation is admirably clear as well. The pdf goes so far as to comment on the use of mythic ranks to bypass the construct-size/CR-restrictions in a sensible manner that actually conforms to the rules – other publishers/authors would have shrugged and just assumed that the idols bypass this restriction. Going one step beyond to retain rules-integrity, even when they may not necessarily make sense…that’s a huge, huge plus, particularly as the system unlocks more freedom for the GM to customize the idol.

Don’t want to simply handcraft anything? We get the basic stats (sans the customizable components) of idols, organized by CR – a TON of them. Over 5 pages of these basic stats. Yeah, that is pretty damn amazing and, as a whole, this makes idols my favorite monster class in a long, long while.

The pdf does contain more than the rules for this evocative monster – namely class options, the first of which would be the Qahin shaman archetype. This is not a cookie-cutter archetype – it’s pretty much the antithesis of that: The Qahin modifies pretty much everything: Class skills, proficiencies (including a restriction against wearing metal armor) -pretty cool. However, where things become interesting is with idol worship. Instead of spirit animal, the qahin taps into the worship of his idol (replacement rules included) and 4th level provides wandering spirit as well as the requirement to create an idol associated to the spirit. The qahin also gains Mental Focus (1 + shaman level) and an implement school, and at first level, mental focus can be invested in the idol and used to activate focus powers. 3rd level and every 4 levels thereafter yield an additional implement school. Unlike an occultist, shamans can use a single idol to act as the collective of implements. 3rd level and whenever he gains another implement, the qahin gains the base focus power of the implement. 5th level and every 4 levels thereafter yield an additional focus power. The save-DC, if present, is governed by Wisdom and class level etc. interaction is concisely defined. The archetype also gains +1 CL when using shaman spells of the implement school when wielding the idol. Even feat-access is covered. Slight, mostly cosmetic complaint: The ability is a bit harder to grasp regarding when it’s gained than it should be.

At 10th level, the archetype can create a ley line nexus attuned to an object (or an idol/animated object), which will allow beings to tap into the nexus – a pretty cool ability. Haven’t seen the like done before! The main meat of the archetype, however, would be the vast array of exclusive hexes, with 10th level unlocking nexus hexes, basically the major hexes of the archetype. The hexes are surprisingly diverse and intriguing and make the respective focus of the archetype change significantly: We have exorcisms, covens, the option to create an arcane bond amulet, save-bonuses versus hexes, possessions, etc., focus-based rerolls, added spells and Craft Construct, less reliance on being close to the idol, ley line surges, haunt-disruptions – all in all, a meaningful, fun selection. Among the 10th level plus hexes, we have the ability to store spells in the idol nexus, merge objects and willing creatures with the idol, travel along the ley lines, spontaneous metamagic-use…basically, these hexes unlock synergy benefits with the ley line nexus in a thoroughly intriguing manner.

Okay, so while the idol focus ability could be worded slightly better, the meaningful options and cool ideas render this my favorite shaman archetype so far. Why? Because it could conceivably carry whole campaigns: If you e.g. replace all clerics and druids with these fellows, you’ll have a glorious set-up for a grim world where qahin battle for supremacy, perhaps full-blown deific ascendance. Yeah, I do want to play that.

The pdf also sports a new PrC, the idolater, who must have discovered a site of power, be capable of casting divine or psychic spells and sport a couple of skill ranks in the Knowledge skills, with 5 ranks acting as the prerequisite threshold. The PrC gain 4 + Int skills per level, ¾ BAB-progression, ½ Fort- and Will-saves, 9/10th spellcasting progression (either divine of psychic spells). The PrC nets the qahin’s idol focus, access to idol hexes…and there is a bit of an issue here: Idol worship and Idol worship’s text is identical, when it shouldn’t be. The PrC also nets spirit magic, which provides a limited number of spells to spontaneously cast. The class also gets basically the qahin’s taboos. 2nd level nets a CL and Spellcraft bonus is a chosen terrain. At 4th level, we treat weapons etc. as ghost touch (not properly italicized) and at 8th level, incorporeal creatures are fully affected by the idolater’s abilities. 5th level unlocks the improved level 10 nexus hexes and the ability to establish an idol nexus. The capstone provides a fey-apotheosis, including the assumption of incorporeal state for up to 10 rounds as a standard action.

Editing and formatting are very good, bordering on excellence. Layout adheres to the nice two-column full-color standard of Legendary Games’ Mummy’s Mask-plug-ins. The pdf sports several really nice pieces of full-color artworks, though fans of Legendary Games will be familiar with most of them. The pdf comes fully bookmarked for your convenience.

Until I started reading this book by Julian Neale and Jason nelson, I frankly didn’t realize how much I wanted to have it: The concept of idols is glorious, their execution excellent. Their creation is explained in a concise and easy to grasp manner. The book provides, in short, a monster class that can arguably carry whole campaign settings. Looking for a way to create a world sans deities? This pdf has you covered! The qahin is by far my favorite shaman archetype ever – it unlocks whole types of campaigns, particularly in games that prefer a grittier, more Sword & Sorcery-esque type of gameplay.

This pdf is also a great example of two designers blending their strengths: Julian Neale traditionally generates math-intense, hard to design supplements, but sometimes misses attaching a concept that immediately draws you in – he isn’t about flashy concepts, more about substance in depth. The influence of Jason Nelson here is similarly palpable, providing some boosts in that regard – and the result is GLORIOUS. In spite of the minor hiccups in the class options, this pdf blew me away: The idols are amazing and the class options, in spite of the (few) minor rough patches are similarly inspired.

Now here’s the thing: This humble pdf inspired me more than a ton of comparable books; to the point where it made me come up with a vast amount of ideas. For example, I will use it extensively in conversion: Idols are, for example, found in the great DCC-module “The Falcate Idol” – with this one, I have pretty much my work cut out for me. And yes, this campaign idea of competing qahin vying for supremacy…I actually want to run it. In short: This is one fantastic book. The minor blemishes are the only reason this doesn’t make my list for the Top Ten of 2017…but seriously, if the concept interests you even slightly, get this now! My final verdict will clock in at 5 stars + seal of approval.

You can get this outstanding supplement here on OBS!