Vs. Ghosts Adventure: The Ghost Next Door (VsM Engine)

Vs. Ghosts Adventure: The Ghost Next Door (VsM Engine) 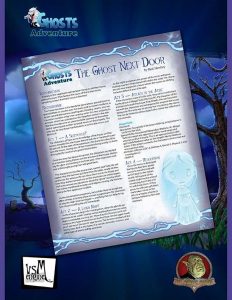 This being a mini-module, I do not expect epic storylines or intricate plots – I’ll review this for what it is, namely a short sidetrek. As such, the module doesn’t offer in-depth details and should be considered to be more of a sketch to be fleshed out further – this is particularly true in this one. You should consider this to be a pretty basic set-up.

All right, only Ghostmasters around? Great! So, selling property can be a pretty tricky business – and a family in the neighborhood has had trouble there. The family believes it’s because rumors are spreading that the house in question is haunted. Enter the PCs! The house, just fyi, doesn’t look haunted – it’s just old…but strange things soon will happen. As the PCs investigate, they are almost hit by a hammer thrown their way – turns out it flew right from under the face of a young man named Jack Todd, who offers to help the PCs.

As the characters spend the night, ghostly phenomena start happening – they range from Division I to II. The upper floor, we’ll see division IV haunts – remnants of the grisly things that happened. While the pdf doesn’t go into the grisly details, domestic violence and suicide are mentioned – something to bear in mind/tone down, should you run this for kids. As the night progresses, the rooms of the house start shifting between eras – for, in the attic, a confluence of activated leylines has taken hold of a mirror, which now acts as a gateway to the netherworld. In the attic, the boss of the module, Abigail Todd, is a POWERFUL ghost – division IV, the former daughter of the architect can drive PCs insane: Madness 4 vs. Mental – on a success, the PC becomes mad and is removed from play. Yeah, that’s pretty nasty and not too fun. While she has a health value, she can’t be destroyed while the mirror exists. Somewhat puzzling: The pdf doesn’t specify how the mirror can be destroyed. Would that be the 8 Health noted in Abigail’s stats? Automatic? Not sure.

Editing and formatting are very good, I noticed no serious hiccups. Layout adheres to a pretty busy three-column full-color standard. The pdf has no bookmarks, but doesn’t need any at this length. We get a rather cute artwork of a ghost girl.

Rich Hershey’s “The Ghost Next Door” is a per se cool set-up: Particularly the idea of rooms moving through epochs and the hinted at dark things that happened in earlier ages makes for a cool set-up. That being said, the module suffers from its sketch-like presentation: Such classic ghost stories live and breathe via the details…details this cannot present due to its format. The story can’t really employ its full potential – neither the family angle with Jack and Abigail, nor the other aspects. The lack of a map and different descriptions for different areas (the house is not described) – all of it points towards the adventure simply requiring more room to shine. I like the writing and ideas here, but as provided, this falls short of what the product-line usually offers. Even when taking the limitations into account, I can’t really recommend this pdf as anything else but as a basic starting point. My final verdict will clock in at 2 stars.