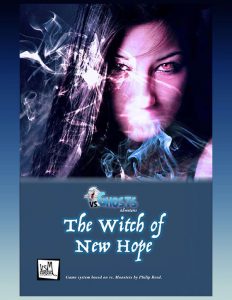 This adventure for Vs. Ghosts clocks in at 11 pages, 1 page front cover, 1 page editorial, 1 page SRD, leaving us with 8 pages of content. It should be noted that the pages are formatted for A5/digest-size, which means you can fit up to 4 pages on a given sheet of paper, if you want to conserve ink/toner.

This being an adventure-review, the following obviously contains SPOILERS galore. Potential players should jump to the conclusion.

All right, only ghostmasters around? Great! The town of New Hope has seen a series of strange deaths: Each night, one member of the community is found drowned – in their homes and sometimes even in their beds. The police is baffled, as there seem to be connections between the mysterious deaths. So far, the town has managed to keep the deaths of locals hidden from tourists, but in the long run, the town is looking at a full-blown PR catastrophe, not to speak of the actual deaths of citizens! We thus begin with a summary of New Hope and its environments, which allows the ghostmaster to get a decent idea of the surrounding area, including the Branton National Forest, near idyllic lake Pawik Kachina.

Now, it’s pretty easy to involve the PCs in this adventure: The classic holiday-angle, locals seeking help, the police – the possibilities should not provide an issue for ghostmasters. Suggested additional encounters with ghost orbs and ectoplasmic mists are touched upon. The first night the characters spend in town will see the murder of Agatha Lashank at precisely 12: 12 AM – how do the PCs find that out? All clocks stopped at this time! Randy, Agatha’s son, witnessed her floating in the air, struggling for breath, and when he tried to help, a woman materialized and flung him across the room.

Nice: After this incident, the module becomes relatively free-form for such a brief adventure: The local newspaper, police files, library – the respective investigations note crunchy bits, target-values etc. – nice! Sooner or later, the PCs should manage to unearth the case of an old serial killer, one Millicent Billington, who killed 13 people, including occult symbolism and all – the bed and breakfast where she killed her victims still stands. Here, thorough PCs can find her diary – while steeped in occult topics, it lacks clear motivation for her crimes…and states the wish of being burned and then to have her ashes spread.

Either at the B&B or at her rediscovered gravesite, the PCs will sooner or later happen upon the eponymous witch-ghost: Millicent is an old lady in black, division IV, and a potent threat – she is angry and will keep on killing until her ashes have been spread as per her last wishes. Doing so will end the threat, but leave the players with a couple of question marks you can use for further adventures.

Editing and formatting are very good, I noticed no serious glitches. Layout adheres to the neat one-column full-color standard and the pdf sports a nice piece of stock art. The pdf does not sport bookmarks, but doesn’t necessarily need them at this length – they would still have been nice to have.

Rick Hershey’s “The Witch of New Hope” is a nice, short investigation – it is not a complex or world-shattering adventure, but it is a solid little adventure for vs. Ghosts. While the plot won’t win any awards for being original, the module is an inexpensive offering and provides sufficient enjoyment for the low price to be considered fair. Now, if you’re playing vs. Ghosts with kids, you should be a bit careful regarding the body count herein and the drowning – making the victims comatose instead may help here, particularly when dealing with young children or particularly sensitive kids that want their happy end. It’s not hard to make the witch just a misunderstood spirit, either.

Anyway, all in all, this is a solid entry – hence, my final verdict will clock in at 3.5 stars, rounded up due to the low price and in dubio pro reo.

You can get this nice, inexpensive adventure here on OBS!

You can get the full Vs. Ghosts-bundle here on OBS!