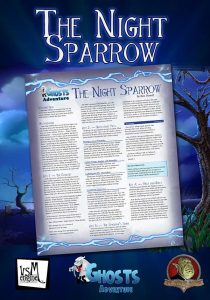 The J-pop band CHI48 are on tour in the US, but rumors abound that the band’s been cursed – multiple concert-goers have been struck blind after attending their shows. The band has been extremely popular (reskin to current pop phenomena for kids) and thus the PCs are assumed to be in the crowd. The concert seems to proceed rather well – but just as the latest smash hit “Night Sparrow” kicks off, people start collapsing in pain, clutching their eyes. Emergency responders act immediately, but smart characters may be able to glean additional pieces of information – like the illusion of black birds coming from the stage and the belief that they heard a strange bird call.

Investigating these folk, the band’s manager Goro Watanabe sports and hires the PCs, who then get to interview the manager, the band, Lighting and FX and the soundboard…and as the investigate the latter, they’ll see a horde of black sparrows manifesting. Special equipment may show the PCs that the computer equipment seems to sport some sort of possession – Yosuzume, a division IV yokai, has become entangled in the equipment, painfully so, and lacking means of communication, the spirit lashes out. Full stats are provided and the pdf provides a fun idea – having the exorcism spill out into the performance – after all, the show must go on!

The pdf ends on a nice high note, with meet and greet etc. and some nice further employment angles for the GM.

Ben Dowell’s mini-adventure is surprisingly creative: The visuals are amazing, the hook is creative. The module makes great use of its limited space and manages to provide a fun mystery for kids and adults alike. In short: This is a great little adventure, well worth 5 stars. Kudos!

You can get this amazing, creative little adventure here on OBS!