Mists of Akuma: The Yai Sovereign of Storms (5e)

Mists of Akuma: The Yai Sovereign of Storms (5e) 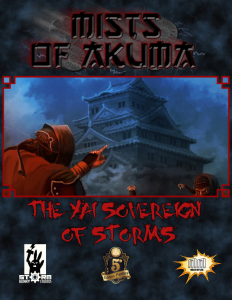 This adventure for the Mists of Akuma-setting clocks in at 30 pages, 1 page front cover, 1 page editorial/ToC, 1 page SRD, 2 pages of advertisement, 1 page back cover, leaving us with 24 pages of content, so let’s take a look!

Now it should also be noted that two pages of the pdf are devoted to providing a recap of the mechanics for both dignity and haitoku, the attributes introduced by Mists of Akuma. The module is intended for 7th – 8th level PCs and should be used with a well-rounded group. While this is intended to be run in the bleak, mist-shrouded lands of Soburin, the module works in other settings as well, provided you can tweak it to include Soburin’s peculiarities – i.e. Japanese Horror with a subdued steampunk angle.

It should also be noted that the pdf contains a wide variety of stats for creatures; from the Mists of Akuma CS reprinted would be the hebikontorōra, the adeddo-onis, the tikbalang and the gaki – though the latter has a name and is called “chief”, the stats of that individual are identical to the standard gaki.The pdf also provides the stats for the oni bengoshi Xiqzoxix. It should be noted that the stats for the eponymous sovereign of storms are new and that a particular, new tsukumogami can also be found within. In short: While there is some overlap with the campaign book, this makes handling the module more convenient.

All right, only GMs around? Great! It is a dark and stormy night as the PCs are traveling the haunted landscapes of Soburin to be contacted by xiqzoxix, who holds a blade to one of the PC’s throats. Despite of the, oni-typical, rather hostile introduction, the creature actually has a quest for the PCs, namely to travel to the remote settlement of Tuskisasu, which has recently been taken over by Obiemashita, who is growing in power. EDIT: Once more, I was not aware of a gender-neutral pronoun employed herein. My apologies if anyone has taken offense. Anyway, the oni offers quite a hefty reward.

At first, the intruder seemed like a feral child, the entity soon grew and has since elevated the bakemono and shikome to unbecoming status…and in Soburin’s rigid hierarchies, that alone should elicit a gasp. Anyhow, in order to find the village cloaked by ancient magics, the PCs will have to travel 100 pages North, and throw a handful of rice over their shoulder after every 25 steps, and that’s only the first part of the ritualistic approach to unveil the village – it is small details like this that make the module feel more organic – nice means to highlight the strangeness of magic.

When within the settlement (which comes with a small map – I wished we’d get one in proper hand-out size), though, the PCs must exert caution – while they get an item, which, when affixed to the yai lord, will influence the future of Yōna, the local oni warlord, currently firmly under the yai sovereign’s control….so yes, some subterfuge will be required. As the PCs approach the settlement, they will have a chance to save two inhumans from the hidden village from the ravages of a tikbalang, thus allowing the PCs to get some potential information and help…while leaving them to die has consequences of its own.

Filled with pretty much a who is who of the more monstrous and not too popular races of Soburin, the settlement may once have been considered to be a jewel – but the chaotic rulership of its new sovereign. The PCs get to witness the local issues first-hand, with (hopefully!) the saved individuals at least deflecting some level of scrutiny. They will need a place to stay low and an abandoned machineshop may provide just that…and if you have that component to drive home, a particularly brutal storm may help you. It should be noted that the shop is pretty free-form apart from the 3 traps provided for it. Once the PCs have secured the place, they will have a nice place to base their further operations on…and, more importantly, take a long rest, which they probably require at this point.

Here, the main meat of the module begins – we get an interesting vista of the strange settlement, but the fully mapped fortress of the oni lord is where the true showdown will happen: There are 7 circles that the yai sovereign uses to control the storms, and the downside of his chaotic edicts is that the guards show less discipline than they should. The PCs will have to destroy the 7 magic circles, as they explore the de-roofed fortress with its bone doors, poisoned railings, etc., all while harried by Obiemashita, who harries them in attempts to learn their tactics as they dismantle his circles. Whether or not the rightful ruler of the settlement is reinstated, or a new lord rules, defeating the yai sovereign will net the PCs some leeway…and the option to acquire an amazing blade, the Katana of Rizushi Kentaro, actually a spiteful takara tsukumogami, which is, in itself, already a nice angle for a subsequent adventure.

Editing and formatting are pretty good. While there are a couple of hiccups, they don’t necessarily compromise the atmosphere of the module. Layout adheres to the pretty busy 2-column full-color standard of Mists of Akuma, which fits a surprising amount of text on each page. Artworks are a combination of full-color pieces and modified public-domain-art, the latter fitting on a meta-level really well with one of the themes of Mists of Akuma. The pdf comes fully bookmarked for your convenience.

This module, ultimately, makes for a good convention scenario: The brisk pace the module sports and its pretty linear structure lend itself well to such environments, with particularly the final reminding me, in a good way, of the Onimusha-franchise. That being said, I found the adventure to feel, ultimately, like a hurried piece that suffers from its self-imposed limitations. The PCs are expected to do some investigation while in the wondrous city, but that aspect is somewhat underdeveloped – on the one hand, the module implies the need for a homebase to gather information from; on the other, RAW, there isn’t that much to be found here; the investigation per se is an afterthought, when it could have been a really rewarding part of the module.

As written, the PCs can explore a series of cool, but mostly fluff brief vignettes that ultimately don’t contribute much to their goals. This feels like it could have carried, you know, PCs facing a difficult mission; with the unearthing of clues, gaining allies, etc., all so they could gain advantages in the final assault. Instead, the investigation and the biggest strength of the module, the unique and wondrous settlement, become basically backdrops on the way to a challenging and per se fun boss fight. With 10 more pages, and consequences for how they tackle the investigation, this could have been an amazing module, but, in its current form, it leaves me somewhat disappointed at a high level.

The module sports a cool finale and unique backdrop, but it falls short of what it easily could have been. As presented, I’d consider this to be worthwhile as a convention scenario. Beyond those confines, it can use some GM-work to flesh out the way to the finale and locale. In the end, I consider this a somewhat mixed bag, with my final rating clocking in at 3.5 stars. If you’re looking for a convention scenario, round up. Otherwise, round down. My official verdict will reflect the latter rating, since I assume that most GMs are looking for material for non-convention contexts.