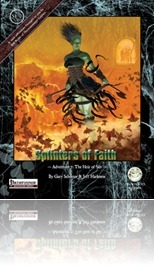 This installment of the series from Frog God Games is 28 pages long, 1 page front cover, 1 page editorial, 1 page ToC, 3 pages of advertisements, 1 page SRD, leaving 21 pages of content, so let’s check it out!

This being an adventure-review, the following text contains SPOILERS, so potential players, please jump to the conclusion.

The latest installment of the Splinters of Faith-series presents us the Shield-basilica of Muir, a fortress set in a mountain-range that makes for a more than awesome location: A fortress-garrison of paladins that houses Muir’s grindstone, an artefact against which the Sceptre has to be hit to hone it and further enchant it. Only happening rarely, the honour of striking the stone has to be earned, though. The ceremony is scheduled to happen soon and in order to win the competition for the honour, the PCs will have to leave on a rescue attempt. The basilica also features some rather iconic defence-mechanisms – a tunnel leads inside and has a corkscrew-like blockage, essentially a stone-revolving door with the option to seal the tunnel while being operated. Neat!

But back to the quest at hand – the PCs will have to brave the pinnacle of Pazuzu, where locust-demons, deadly aerial servants, 4-armed gargoyles and corrupted djinn as well as some rather interesting traps await your PCs and it is in this installment that the difficulty of the campaign arcs up. Once the PCs have saved the damsel in distress, they have earned the right to use the grindstone and receive another blessing for the Sceptre of Faiths. I would have loved a social encounter/ some roleplaying- encounter depicting the ceremony/some additional challenges to determine the worthiness of the PCs. None are provided.

Editing and formatting are top-notch, I didn’t notice any significant glitches. Layout adheres to the 2-column standard and the b/w-artworks are neat. The pdf strangely does not offer any bookmarks, which is a pity. The shield-basilica in one of my favourite temples in the whole series and is iconic, cool and smart – a true bastion of good in a world that has changed. The temple is a smart fortress and its non-standard defences rock. Kudos to the authors for providing yet another smart temple. The evil temple in this installment is a good little dungeon with some rather challenging defences and neat non-standard foes. While the dungeon is not the best of the series (I still prefer the dungeon in Eclipse of the Hearth), it is one of the best in the series so far. The pdf could easily have been a stellar scenario, but it suffers from the hick-ups of the series as well – no player’s maps, no transitions and the great roleplaying scenario of the test of worthiness has been left mostly undeveloped, missing out on a stellar roleplaying opportunity. This installment does not feature a wilderness section and thus I can’t complain about player’s maps for wilderness areas. Add to that the unnecessary lack of bookmarks and I’ll settle for a final verdict of 4.5 stars, rounded down to 4.

Splinters of Faith 7 Pathfinder Edition is available from: