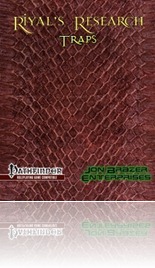 This pdf from Jon Brazer Enterprises is 7 pages long, 1 page front cover, 1 page editorial/SRD, leaving 5 pages of content, so let’s check out what this pdf has to offer!

Riyal’s list of traps begins with a page of aptly-written IC-prose that introduces us to the matter at hand, and takes two often neglected components into account – trap designers and their mentalities and bypass mechanisms. The pdf contains 24 traps ranging from CR 1 to CR 19, from humble poisoned spears used by kobolds and alarms to acid dumps preferably used to cover the retreat of snipers, secluded summoning circles and other classics are provided as well – from spinning blade-filled pits to drowning chambers to the magic missile-to-the-face traps, we get some of the tried and true, but not necessarily too exciting classics.

Just when I was ready to give up on expecting anything too exciting from this pdf, some nice pieces of prose lift my spirits and introduce me to alchemical frost bombs and truly deadly storms of shadowy arrows blasting forth from relics of old as well as providing exploding columns that detonate and can be considered a delayed rocks-fall-you-die that leave the players with time to do something about it. The most disturbing trap, though, definitely is the CR 19 Collapsing Wall of Skulls, which not only does insane amounts of damage, but also because just one animate dead spell by the opposition may increase its efficiency even further!

Editing and formatting are top-notch, I didn’t notice any glitches. Layout adheres to a printer-friendly b/w-2-column standard and the pdf comes with full bookmarks. In contrast to Riyal’s research on haunts, this pdf is definitely centered on classic pulpy traps and while they do feature a certain iconicity, the sheer imaginativeness of the haunt-supplement does not suffuse this supplement. The IC-considerations on traps are smart and something to bear in mind when using traps and there indeed are some traps herein that are worthwhile. However, true genius or an eureka-effect like in “#30 Traps for Tombs” or NNW’s “The Art of Traps” could not be found in this selection of humble traps. Don’t get me wrong – for the low price, this pdf does indeed feature some traps you might enjoy and provides some quick and easy to use traps that can be used in almost any context. It’s just that after reading the unique take on haunts in the other Riyal-book, I expected a bit more. For what it is, this installment of Riyal’s Research is still an ok buy and thus I’ll settle for a final verdict of 3 stars.

Riyal’s Research: Traps is available from: