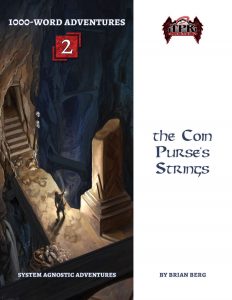 All right, this little system-neutral adventure-sketch clocks in at 3 pages 1 page front cover, 2 pages of content.

This being basically a system-neutral adventure outline in precious few words, I do not expect earth-shattering storylines here.

This being an adventure review, the following contains SPOILERS. Potential players should skip ahead to the conclusion.

As the PCs travel to the bustling city of Reyston, the PCs encounter the local guard – the Untarnished, who are looking for shaven coins…and of course, they take in the PCs, with the shopkeepers caving before the guard’s pressure. Liam Cunningham, the captain of the guard, lets the PCs stew in their cells for a few days…before the PCs are sentenced and fined. He offers to let the PCs hunt down the real culprits to cleanse their name and repay their debt to society.

The PCs are given a rough map of the city (not included in the pdf). There are various trails to pursue: The sewers house cultists…and the thieves’ guild, who waste no time pointing their fingers at others, but deny being involved. The beggars can provide information, but are notoriously stingy. The local church, helmed by Archimandrite Claderus, seems to have been compromised – rumors abound that the holy man’s been seen with gaudy jewels and drunken… The lord-mayor Johann is equal parts scoundrel and businessman. The merchant guild seeks to increase its power in town…and rumors abound about shady newcomers.

Yep, this is less of one mini-adventure and more like a pretty nice frame-narrative to connect different, unrelated sidetrek – and it does that job rather well…particularly when the PCs realize who the culprit is, and why the coin-shaving operation was started in the first place…

Editing and formatting are very good. Layout adheres to a relatively printer-friendly 2-column full-color standard with a mostly white background. The pdf has no bookmarks, but needs none at this length.

Brian Berg (with additional content by PJ Harn and James Lewis) delivers a cool storyline that can easily be used to connect various different scenarios: You won’t need to modify anything about the scenarios, as virtually every module sports coins. In short: This is a cool way to add a leitmotif, a context, a progression to a series of otherwise unrelated modules. As a stand-alone, the adventure is a bit sketch-like, but the classic plots employed in the respective hooks make synergy with other adventures really simple. Still, if you want to use this on its own, I’d rate this at 4 stars.

However, I really love this type of meta-plot and use the like a lot – as such, I can wholeheartedly recommend this humble, inexpensive pdf for that purpose. When used this way, this should be considered to be 5 stars. For my final verdict, I will settle on 4.5 stars, rounded up due to in dubio pro reo.

You can get this solid offering here on OBS!

It is also part of TPK Games current 5e-bundle, which you can find here!