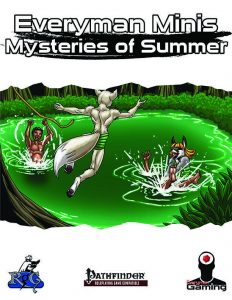 This Everyman Mini clocks in at 9 pages, 1 page front cover, 1 page editorial, 1 page advertisement, 4 pages of SRD, leaving us with 2 pages of content, so let’s take a look!

This Everyman Mini begins, as they all do, with a nice, brief introduction page that also contains, this time around, a new spell, namely the wall of light – this represents a blinding curtain of light (closing eyes can negate the blindness, unless passing through), and the wall is particularly potent versus creatures from the plane of shadow. Nice visuals! (Yeah, groan-worthy reviewer-pun. I know.)

The main meat of the mini is taken up, surprise, by the summer mystery, which adds Knowledge (nature), Perception, Survival and Swim to the list of class skills. Bonus spell-wise, we have a strong fire-and light-theme, starting off with produce flame and moving with unbearable brightness, the new spell and sirocco to the higher level sun- spells and finally, to fiery body. Now, unsurprisingly, we get the flame mystery’s heat aura (sans wasting the wordcount) among the revelations.

The revelations include a blistering touch that may stagger foes temporarily if they fail their save. Gaining Flaming Spell and being able to use it a number of times sans increasing the casting time…some solid tricks. I particularly liked Heatstroke, which can add fatigue (non-stacking) to spells with fire or light descriptors for a limited duration. I also am partial to Midsummer’s Dream, which generates a fascination-inducing effect that makes the creatures behave as though in their favorite summer retreat – and they even are warmed as though the dream was real! There is an amazing expedition to the frigid ridges angle herein! Pretty cool: There is a revelation that draws sustenance from the sun’s rays, including, at higher levels, the option to rest quicker – and kudos here, it does not break the usual limitations of spell preparation. A solar body form that can damage nearby targets and at higher level blinds them also makes for a nice image.

Gaining some illusion bonus spells is damn cool, as is being a summer child that can stand the heat. Finally, you can afflict foes with nasty sunburns with your light spells (slightly weird: fire is exempt here, when the other abilities all affect fire and light). The final revelation nets you a DC-increase and the option to cast 3/day miracle, but only to duplicate fire or light spells.

Editing and formatting are very good on a formal and rules-language level. Layout adheres to Everyman Gaming’s two-column standard with a white background, making this relatively printer-friendly. The pdf sports a nice full-color artwork and has no bookmarks, but needs none at this length.

Margherita Tramontano’s mysteries of summer are cool: The added effects, concisely-worded, make for a fun and tactical array of options and the revelations often are pretty creative. The dual focus of heat and light make sense and elevate this beyond being just another fire-specialist. That may just be me, but I had this vision of a lone oracle walking through the scorching, hot mesas with a smile on her face and a song on her lips. The revelations provide a variety of cool and meaningful options. My final verdict will clock in at 4.5 stars, rounded up for the purpose of this platform since the mystery manages to present a rather well-rounded array of options.