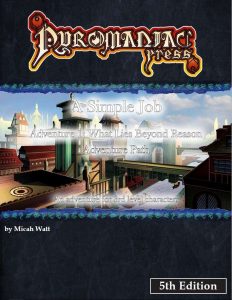 You see, when I stated that this is a “setting the stage type of module”, I was referring to two aspects: This, for one, introduces interesting locations and a general knowledge of the city and also establishes a base-line of contacts/dramatis personae. The timeline mentioned will become rather important, as the PCs choose their respective travel method: From going on foot/carriage) to taking ships through the channel to using air ships or hippogriffon chariots (!!!), en route travel encounters galore are included – and those you don’t end up using can be employed/scaled later…and yes, these are pretty cool. Unlike in the PFRPG-version, I can’t complain about an absence of vehicle-stats here. On the way, the PCs will also be introduced to the methods of the seekers of Asmodeus (and have a chance to foil them at their own game) and may be drawn into the machinations of a bored (and rather nasty) aristocrat… That being said, the travel time summaries etc. are pretty cool!

Now, the manner of how which Radiant Soul, mistress of the scriptorium’s researching capabilities are noted is somewhat odd and while generally, the 5e-material has been converted rather well, e.g. the bladeleaf hazard is still missing its damage type, which is a pretty big deal in 5e’s rules-terminology. Another weakness of the 5e-version would be that all stats-blocks have instances where they deviate in formatting from the established conventions, with italicizations missing and the like. Not to an extent where it’s bad, mind you – e.g. damaging objects and similar things all have been properly covered, but personally, it does irk me a bit. The same can be said about a magic item included, which slightly deviates from the formatting conventions.

To free Trevel from the entity’s grasp, the PCs will have to eliminate a powerful otyugh – who makes for a brutal boss in 5e! This frees Trevel, but he is still love-struck and convinced that bringing Lysenese the flower will grant him her favor – a fool’s errand, but deductive PCs may realize that the blue flower gained in the beginning is just that sought-after flower. Getting Trevel to pull back will yield the PC’s the favor of the scriptorium. Ultimately, one way or another, Trevel will return and help against the insidious bureaucrat, thus freeing the goods…and concluding this interesting, not so simple job!

Editing is very good, though formatting can be considered to be in need of a bit of improvement – the pdf does deviate from established 5e-formatting in a few places. Layout adheres to a professional and well-made two-column full-color standard and the pdf comes with a second, more printer-friendly version. The softcover is nice and has neat colors and sports A LOT of really nice full-color artworks. The adventure comes with an archive that contains the maps in a player-friendly, key-less version – big kudos!! The electronic version is fully bookmarked for your convenience.

As of the 5e-version, Ismael Alvarez has done an excellent job for the most part – while I could find a couple of hiccups, the important bits have been carefully and thoroughly converted in a rather nice manner. This can be considered to be a good conversion.

That being said, this is still a railroad in the vein of Ultima 7-questlines, where quest upon quest is heaped upon another in a linear manner. The respective vignettes are nice, yes, but if your players are like mine, they may not be too happy with this aspect. It does speak for the module’s quality that the vignettes, locations and NPCs can somewhat counteract this structural deficiency, but in the end, a good railroad still remains a railroad. This is a good one, but setting up two relatively linear modules, back to back, isn’t the best idea – it works here, but I was pretty happy to see #2 deviate from this formula. It should be noted that the 5E-version of this module is BRUTAL and NOT for the faint of heart. The boss has over 100 hp! Whether you like that or not depends on the group; personally, I love the challenge and it is an encounter that can be somewhat controlled by the PCs, but in comparison to PFRPG, it is a noticeable difficulty spike…one that means that the module doesn’t “peter out”, but also one that will have some players shocked.

The rating? Well, this ultimately is a good module – it sports a lot of prose and read-aloud text, evocative locales and introduces some seriously cool NPCs…but ultimately, I can’t go higher than 4.5 stars, rounded down for the purpose of this platform. *PERSONALLY*, I actually like the 5E-version better. The brutal final boss adds a serious touch of pain to the module that I was kinda missing in PFRPG…but that can go both ways and some groups may consider this to be a bit much, so GMs, take care there.

You can get this cool module here on OBS!
Endzeitgeist out.