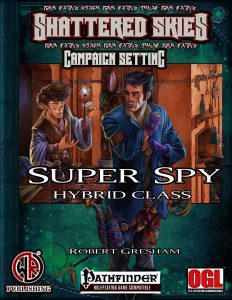 The super spy is a hybrid class of investigator and vigilante and receives, chassis-wise, d8 HD, 6 + Int skills per level, proficiency with simple weapons, firearms, hand crossbow, rapier, sap, shortbow, and short sword as well as light armors. They get ¾ BAB-progression as well as good Reflex- and Will-saves. The class begins play with +1d6 sneak attack and improves that every odd level thereafter by +1d6. Sneak attack’s rules have not been reprinted in the class. Third level yields uncanny dodge and 8th level provides improved uncanny dodge. The class begins play with Cosmopolitan as a bonus feat (not properly capitalized) – weird: The ability reprints the feat’s text, which can be a bit confusing, as one could assume that the effects of the feat are doubled.

Starting at 3rd level, the super spy adds his class level to the DC to intimidate him – though text and class table can’t decide on whether the ability’s called “unshakeable” or “unflappable”. At 1st level, he gains audacity, which is basically a Charisma-based version of Inspiration (1/2 class level + Charisma modifier) that can be applied to Acrobatics, Bluff and Escape Artist sans spending a point. Additionally, the super spy is a gadget expert – he gets his class level as a bonus to UMD checks. Additionally, he may 3 + his “Cha” modifier (should be Charisma) times per day use a bomb, extract or scroll acquired from another class – scroll activation requires 2 uses and a UMD-check against twice the scroll’s caster level. Which is a weird, weird formula. Why bother rolling? 5th level lets the super spy discern command words for wondrous items – for one use of his “item activation ability”, he can use the item once, immediately forgetting the command word thereafter…which is REALLY weird. I mean…someone can just pen it down, right? At 12th level, the super spy can activate wands as a move action instead of as a standard action.

4th level provides aura infusion: When the super spy gets an extract, he may use it. The second sentence of the ability is utterly confused: “Beginning at 4th level, the extract now persists even after the super spy sets it down. As long as the extract exists, it continues to occupy one of the super spy’s daily gadget expert uses. An infused extract can be imbibed by a non-super-spy to gain its effects.” OH BOY. Where do I even start? Does regular extract use still cost gadget expert uses? Yes or no? Is “infusing” the extract an action? If an alchemist hands an extract to the super spy and he gives it to the wizard, does it work? If the extract is consumed, does he regain the expended gadget expert use? The ability suddenly introduces terminology and expects it to be concise when it really isn’t. It’s clearly based on the infusion discovery, sans accounting for the added complexity of the super spy as a middle-man. 8th level yields cognatogen, 12th greater cognatogen, and 16th level grand cognatogen.

2nd level and every even level thereafter nets a spy talent, which is, at 10th level, expanded to include advanced talents. The talents include die-size increases for audacity, renown, helpers, proficiency – sounds familiar? The talents are basically all taken from the investigator’s array or the vigilante’s social talents. We can also find e.g. glimmering infusion among the advanced talents – missing the italicization. Problem: “…and the effect’s save DC is calculated using the level of the sacrificed extract.” Okay, whose governing attribute? The extract provider or the super spy? When an ability is mostly a reprint and then the little bit of original content, the little bit of tweaking has issues… Well. Not good.

The capstone nets supreme spycraft: As a full-round action, the super spy can shift his aura to a helpless creature, making divination spells target the creature instead (spell references not italicized). Additionally, after succeeding a save versus a mind-affecting ability, he continues t be aware of the creature’s commands and messages for the duration of the effect. Ehm, you know that mind-affecting =/= compulsion/charm…right? The former encompasses much more and often lacks commands. The super spy also gets +5 to Disguise versus folks taking 10 on Perception. And may 3 + Charisma (here, properly noted) times per day be treated as having rolled a 20 on Bluff, Diplomacy, Intimidate or Sense Motive. Yeah, really weird – the capstone is totally disjointed from the class and feels like its constituent abilities should have been gained earlier and in a reduced capacity, accumulating to this point.

The class lacks favored class options and does not sport even the basic Extra X-uses feats.

Editing and formatting are better than usual for Wayward Rogues Publishing – the rules-language is tighter, the wording more precise. I wish I could say it’s because the editing’s tighter. It’s not. There are still plenty of missed italicizations etc. It’s simply because the class consists of about 95% refluffed material that was cut copy pasted. Layout adheres to a really nice two-column full-color standard and the artwork of the class, as seen on the cover, is GORGEOUS. The other artwork herein is a really nice stock-piece I’ve seen before. Still, aesthetically, this is pleasing. The pdf has no bookmarks, which constitutes a comfort detriment. Worse, you can’t highlight text or parse it or copy it from the pdf – you have to do so BY HAND. This is another comfort detriment and ironic, considering the amount of reprinted material herein.

Robert Gresham’s super spy is functional. Mostly. There are some wonky bits in the approximately 5% of new material that was not copied from other sources, i.e. the new material. As a whole, the class can be played. Here’s the problem: Why would you? The super spy, in a puzzling move, gets rid of everything really cool about the parent classes. No vigilante talents, no extracts, no bombs, no nothing. Don’t get me wrong, I like social talents – I adore them, actually. However, they and a few investigator tricks (minus studied strike) aren’t enough to carry a class.

And here’s the worst part: The super spy, as presented, is actually a fun drain for allied alchemists/investigators.

What do I mean by that? Well, a significant amount of the abilities of the class depend on getting extracts and bombs from other characters. So, unless your foes carry them around all the time (and the super spy isn’t super at stealing them in combat etc., making that a highly ineffective strategy…), the class will attach, like a parasitic leech, to any alchemist in the party, draining all the cool resources of his alchemist buddy.

Namely, bombs and extracts. I can picture the super spy whining in the CD-I’s Zelda: Wand of Gamelon/Faces of Evil’s Link’s annoying voice to his alchemist buddy to share the goodies. “Aaaaalcheeeemist…gimme booooombs!” In short, the class drains the resources of allies. There is also the problem with sneak attack interaction, the wonky bits that result from being a secondary user of class resources, etc. Oh, and don’t have an alchemist in your group? Congrats, you’re significantly worse and less interesting than both parent classes. And no, audacity does not allow you to take inspiration-based archetypes.

So yes, you could play this class. But honestly, if you want to support Wayward Rouges Publishing, buy another class. ANY other class by Wayward Rogues. Some are more flawed than this, but they at least either have more unique tricks or at least don’t FRICKIN DRAIN AN ALLIES’ RESOURCES.

Formally, this isn’t bad, if highly redundant and mostly taken from other sources. The comfort detriments are expected for Wayward Rogues material at this point, though I will continue complaining about them.

But the class not only isn’t perfect, it actually drags down the fun of allied classes and can spoil the fun of other players.

The super spy is, essentially, a parasitic class that sucks the cool out of alchemists and investigators.

Don’t get it. Stay away.

Beyond the flaws in the details, this hampers the playing experience of other players. As far as I’m concerned, it literally can’t get worse than that. My final verdict will be 1 star.

You can get this class here, if you really want.