Shadows over Vathak: Colonies – Silhouette of a Shadow

Shadows over Vathak: Colonies – Silhouette of a Shadow 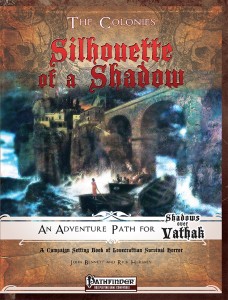 The first module set in Vathak, this pdf clocks in at a pretty impressive 62 pages, 1 page front cover, 1 page editorial, 1 page ToC, 1 page back cover, 1 page advertisement, 1 page SRD, leaving us with 56 pages of content, so let’s take a look, shall we?

But before we do – here’s a warning: This being an adventure-review, the following contains SPOILERS. Potential players will wish to jump to the conclusion.

All right, still here? We begin this module with several key-components: For one, a sidebox on the fragility of 1st level characters explains that more action-oriented groups may want to run this module at 2nd level – though the module allows for the solution of problems via smarts. The fully depicted town of Smelt’s Run gets a full-blown gazetteer – including a solid, full-color map. The town also sports a racial prejudice – Smelt’s Run is a Romni ghetto, following the more gritty, dark theme of Vathak and thus sees some hostility to non-Romni. The module also sports a handy timeline for the GM.

But what are the PCs supposed to do? Via one of quite a few adventure hooks, the PCs are tasked to track down a man called Rolistair, loosely associated with the Church of Unspeakable Masses. The module thus begins with a investigation in and around Smelt’s Run – with numerous different entries of read-aloud level of detail; a random encounter-table allows the GM to splice some action into this section. Beyond the skill-based basics of asking around, the module also depicts the key-locations.

Take a look at the “Tower,” a medieval/Victorian equivalent of an apartment block: “A massive five story wooden edifice squats before you, dozens of barred windows gazing out sullenly. Scorch

marks from previous fires stain its grimy walls. Lines of dirty laundry stretch to the nearby buildings that crowd around. Even from this distance, a din of noise- screams, raucous laughter, and heated arguments, spill from the building. A group of ragged children chase a chicken through a puddle while an elderly couple sit on a bench near the building’s small entrance.” – See this read-aloud text? Yes, the read-aloud texts are REALLY well-written and the locations ultimately breathe an almost tangible sense of grime and threats lurking just below the surface. Finding Rolistair’s room, the PCs can have their first sense of horror here – between a desolate hookah, spell components and mad ramblings, undead monkeys await and make abundantly clear that the PCs have stumbled into something rather unpleasant…

Further investigation from this place may put the PCs into ample conflict with the rather nasty thugs that can be found in Smelt’s Run -whether following the trail of smokeweed, known prostitutes consorting with the man, the trail of spell components – there are a couple of clues popping up: For one, the church of unspeakable masses seems to have been burned down. The PCs may also get a feather and the name “Lawana” as a kind of hint – unbeknown to the PCs, this woman is a swan maiden…and currently, as the PCs reach her home, under attack by cultists. Here, I have a bit of a met-concern: While I get the dramaturgy of Lawana being unconscious upon the PC’s arrival, the cultists are horribly ill-equipped to down the maiden…even with the “lucky hits”-explanation, her DR makes her all but immune to their attacks, so at least to me, a better explanation would have been nice. (Note that the players never get to see this aspect, so it’s no real problem… but still. It’s a consistency glitch.) Also rather interesting – a nice, fast-paced chase against the leader of the assault is provided (to retrieve the maiden’s cloak…), with an alternate means of tracking the man being covered as well. Besting the leader, the PCs finally find a clue towards their target – it seems like Rolistair has founded the Reformation Church of the Elder Sign.

Infiltrating the church is the smart choice here – but the PCs you also enter the fully-mapped church with guns blazing, though the climax does lose a bit of its impact of drugged attendees and odd technology – also in here, the PCs can find the second in command and piece together that Rolistair is planning a ritual most dread in the Lazard Ruins – where strange, haunt-like properties and cultists await…and where Rolistair turns out to be an afflicted werewolf, subjected to some…strange…procedures and thus pretty insane. Besting the insane cult-leader puts a stop to his dread incantation and his “church”, sure, but the man’s lobotomy-scars and status as a werewolf may mean that the PCs have just taken the first step down the rabbit’s hole – the GM may know more from the adventure’s background, but the shadowy entities beyond the scenes and factions may now suddenly have the PCs on their radar – which ensures pretty much a significant array of further adventuring possibilities.

Editing and formatting are solid, though I noticed a couple of typos and inor glitches. Layout adheres to Fat goblin Games’ beautiful 2-column full-color standard for Vathak-books. The pdf comes with several thematically-fitting full-color artworks. The pdf is fully bookmarked. Cartography is full-color and solid, though I wished the Pdf had player-friendly maps sans keys.

John Bennett and Rick Hershey have crafted a nice supplemental module here: Silhouette of a Shadow sports a rather intriguing array of unique locations. The investigation provided breathes a nearly tangible sense of decrepitude and hostility that gels well with the horror-theme. The writing is just as great as I’ve come to expect from John. At the same time, this is branded as an AP-module (though Part II is not yet released as per the writing of this review) and as such, it very much feels like it’s setting a number of unique things up for future installments. This is particularly evident regarding the antagonist’s motivation and fate, which may remain (intentionally) opaque for the players. At the same time, the challenges presented are diverse, the investigation flavorful.

Ultimately, Silhouette of a Shadow may not be a perfect module, but it is a fun 1st-level investigation that offers diverse challenges for the PCs as well as a compelling narrative – albeit one that will leave some questions unanswered. Now usually, I’d be a tad bit more critical regarding e.g. minor statblock glitches or the aforementioned minor consistency-bug – but this book ultimately counters these less awesome components via the quality of its writing and the more than fair, low asking price for a module of this length and diversity. My final verdict will hence clock in at 4 stars.

You can get this nice, inexpensive horror-module here on OBS and here on d20pfsrd.com’s shop!