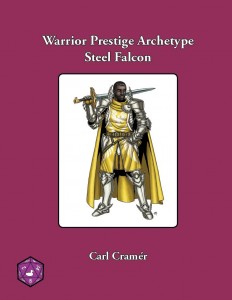 This pdf of the Warrior Prestige Archetype-series clocks in at 10 pages, 1 page front cover, 1 page editorial/introduction (explaining the base concept of the series), 1/2 page blank, 1 page SRD, leaving us with 6.5 pages of content, so let’s take a look!

The Steel Falcon, as presented here, uses the ranger as a base chassis – that means full BAB-progression, d10, 6+Int skills and two good saves, but the class gets full proficiencies. First level nets wild empathy and favored enemy progression starting at first level, progressing at 5th level and every 5 levels thereafter. As a note: The table lacks the favored enemy entry at 1st level, though one may argued that the prescribed choice “slavers” as a group counts locked by another ability counts as that – so no, not going to bash the pdf for this.

5th level nets armor training, 6th a d20-reroll and 7th an upgrade for aid another. Subtle Manipulator is relegated to 11th level and Avoral’s Blessing to 13th, while the PrC’s capstone, Avoral’s Fury, comes into play at 19th level. Chainbreaker is very late to the party – 18th level, at which point that aspect is essentially all but lost to the overall playing experience. That being said, the dispersal of ranger abilities throughout the levels of the class is sound.

The class comes, as always, with nice FCOs for the core-races and a sample character at level 1, 5, 10 and 15.

Carl Cramér’s Steel Falcon has a hard legacy – while I love the organization’s concept in Golarion, the Steel Falcon PrC is less than awesome – it simply lacks interesting theme and feels like a pretty disparate array of abilities that thematically fit, but lack a concise crunch base-line. This issue is somewhat mitigated by the class as presented herein…but at the same time, one might argue that this Steel Falcon is a variant ranger whose truly unique abilities only come into play at the higher levels. While it does play different from a base ranger, the difference lies mostly in the details and, when compared to the best in the series, it does feel like its defining traits enter play simply too late – at low levels, there is not that much unique going on here. This is in no way a bad installment, but neither did it blow me away. My final verdict will hence clock in at 3.5 stars, rounded down to 3 for the purpose of this platform.