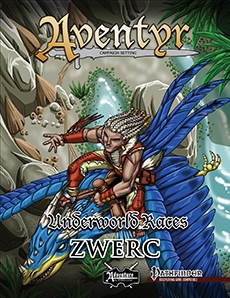 As with the other installments of the Underworld races-series, this one kicks off with a massive mythology of the subterranean races, a collective origin history that can be potentially transplanted from Aventyr into other settings, should one choose to do so – it should also be noted, that this section has been slightly modified in contrast to earlier installments of the series. From there on, the zwerc are described – amidst the numerous dwarven races forged from the ancestry of the dvergr, the zwerc may be the oddest: Striving for magical supremacy, they withdrew not as a race, but as individuals, finding the amber roads and using these strange ores to travel and establish a kind of realm of demiplanes/elemental earth overlaps – and indeed, their slight elitist strain may have turned them from being insular to being conquerors, were it not for the destabilization of these amber roads during the myriad cataclysms that shook Aventyr’s underworld, providing ample reason for the relative scarcity of these most reclusive of dwarvenkind.

Zwerc receive +2 Int, Wis and Cha, -2 Str and Con, are medium, receive slow and steady movement, have darkvision and low-light vision, have stonecunning, always treat Knowledge (Arcana) and Use Magic Device as class skills, +2 to dispel magic checks and checks to overcome SR. They can also, 1/day, turn a 10-ft.square into difficult terrain – failing to specify whether this is Sp, Ex or Su as well as failing to mention the action this requires. They also have light blindness and Spell Resistance equal to 6 + character level and they are treated as fey. In case you haven’t noticed – the zwerc hit a bunch of my pet-peeves at once: 1) SR. Okay, it is at least non-lowerable. But still, rather powerful – on its own. They receive the powerful senses. But I’d let all of that slide. What really rubs me the wrong way would be the uncompromising gearing of the race towards the caster-roles – this could have easily been achieved with less blown-up attribute bonuses and instead 2 +2 bonuses freely chosen, with one also being available for the physical scores. Yes. The fluff exactly portrays them as very magical – but balance-wise, this means that the race unnecessarily disqualifies itself for less high-powered games. So why not provide a more conservative base race and provide an alternative/scaling-advice? As written, I wouldn’t allow these guys in any but high-fantasy games. Which is a pity, for I adore the fluff of the race.

Zwerc also come with information on aforementioned amber roads (including a magic attenuator/compass to point them out and a lodestone that can transport you to a zwerc enclave it is tied to – alas, sans specifying how to charge the item – I assume, as per the rules of wondrous items, but I’m not sure, since both are regular items…and both lack information on how to activate them…), may select dwarven alternate racial traits and the paizo-classes as well as the stonespeaker receive FCOs. 1/2 secret of the stone (the talents of the class) alas feels like the one FCO that is too strong.

The first lets you safely travel the amber roads in small groups. The second nets you 3/day detect magic, 1/day identify and starting at 7th level, 1/day arcane sight. Boring. Another feat nets you +2 Con and +2 to one of your spellcasting attributes at the cost of a -4 penalty to another attribute and a non-improving oracle’s curse from a short list. Urgh. The base race is already very min-maxy for casters and this further exacerbates this issue. Zwerc Warrior nets you the ferrous growth ability (why not reproduce it herein for convenience’s sake?) usable cha-mod times per day, allowing you to grow iron into specific shapes. I like the imagery. Zwerc Striker and Zwerc Defender are mutually exclusive and can’t be activated at once “by the same source”- both have one terribly wonky mechanic in common: After suffering damage from a magical source (anything that would be subject to the effects of an antimagic shield…), zwerc can convert one point of damage into a +1/3 character level enhancement bonus to shield or weapon/unarmed strikes. URGH. First: EVERYTHING is “subject” to the effects of an antimagic field and there’s a difference between the terrain feature and the spell. Still, all entering either are affected. Even completely non-magical entities. They just don’t care. Secondly: These bonuses effectively can be rendered infinite by just ONE cantrip, rendering both feats BROKEN – or at the very least as open to exploitation/cheesing as possible. Also: +1/3 character level? That’s a full+6 at 18th level. Ouch. While thankfully, the feats get the component right that the zwerc still takes the damage that triggers the feat’s effects, but the overall wording of either feat is wordy, wonky and could have used some concise streamlining.

We also receive 3 new magical items – granite snacks can be eaten by zwerc and render them subject to freedom of movement “that only applies to cave-ins and natural hazards.” That is not how freedom of movement works. Zwerc would still get squished and I think this wanted to go for earth gliding or something like that instead – more concise wording would have helped this cool snack (which btw. damages non-zwerc). Listening Stones are essentially magical wiretaps – cool! A power-component for the use of amber trail dust provides surprisingly yet another cool item – kudos here!

The pdf closes with 3 new spells – one offensively teleports a part of an amber road as an offense spell into the material plane. Depending on the reading, this component is either irrelevant or the spell is utterly OP, enforcing immediate beginning of suffocation and a DC 32 Str-check to escape. Do you know the suffocation-rules? No? I’ll wait here for a second. Okay, read them up? So, do the con-checks start immediately? If so-> Very powerful. Better range and duration than the comparable suffocation-spell of the murder domain. If the spell leaves the usual time before enforcing con-check, that component is unnecessarily wonky and will probably never see its in-game effects come to fruition.

Find and Seek Earthly Transit allows you to use the amber roads to move through stone. The first can be executed at 2nd level for some classes, 4th for full casters. It also has no maximum range of the stone you can traverse thus. Its flair and fluff are great, its execution is sloppy. What if there is not enough space on the other side of the stone? Can multiple casts be chained to move through more stone? Shouldn’t this have the [teleportation]-subschool? Utterly sloppy spell. The second one allows you to find entrances to the amber roads.

Editing and formatting are okay, I noticed some formal glitches, though none too jarring. Layout adheres to a drop-dead-gorgeous two-column full-color standard with rocky borders and awesome graphic elements, making this a beautiful, if not very printer-friendly pdf. The plentiful original pieces of full color artwork throughout the pdf are nice. The pdf also comes fully bookmarked for your convenience.

Mike Myler, Julian Neale,Stephanie Connors and JP Krhovsky are talented designers and authors – and this pdf does show that – the zwerc’s concept is, let me reiterate and emphasize that, downright awesome.

From the story to the concept and the amber roads, the zwerc are damn, damn cool. They also suffer from the classic ability-bloat that is imho a bane of good race-design. The base race, while fitting for high-powered games, disqualifies itself for grittier campaigns via its emphasis on min-maxy rules. The feats, surprisingly, further exacerbate these issues and suffer from needlessly clunky wording, which unfortunately extends towards the design of the items and spells. As written, a significant amount of the rules in this book simply doesn’t work. Even if you look past the more nitpicky issues with rules-language, the elephant in the room remains – the awesome, iconic concept of amber roads. This is, the coolest, the defining, the most iconic concept of the race – and it remains utterly ill-defined. Can one breathe there? What about gravity? Elemental alignment? The disjunction seems to imply that one suffocates there, so how does one travel these roads? How do the items to enter zwerc-enclaves work? Can one teleport into amber roads? Do they count as another plane? Does zwerc-SR hamper amber roads? If no, why not? If yes, why do they have SR in the first place?

This pdf remains utterly SILENT. The idea of taboos for zwerc-enclaves are cool…but why are no examples given? What about actual consequences for breaking of taboos? Why is literally the one rules-relevant, central concept that defines the race and its unique lands, its exodus, left tabula rasa to the point where it renders portraying the race as a whole in a concise, believable manner nigh impossible? Beyond the numerous mechanical issues, this omission, more than any other component of this pdf utterly shoots the race in the foot. So you have this cool race, with its neat tools, unique homelands, enclaves and culture…and then do not provide anything about what renders the race unique? That’s like gitwerc sans functional soul trading rules, like hoyrall sans multi-arms rules and info on their unique society/structure.

The zwerc have vast potential, but their execution on a rules-language and on a narrative base, remains lackluster and annoyingly opaque. And yes, I thought about this being intentional. Guess what – the tolerance for being opaque for the sake of ease of integration ends as soon as said nebulous concepts start impeding the very rules that govern a book’s usefulness. My final verdict, as much as I hate doing so, will clock in at 2 stars.

You can get the zwerc here on OBS!